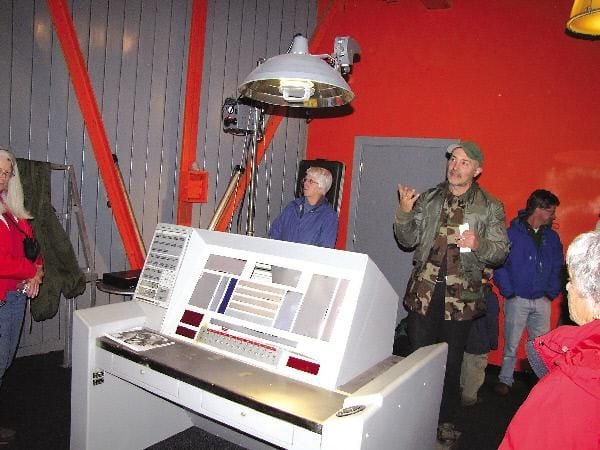 The launch control panel in the command center looks much like it did in the days of the Cold War. 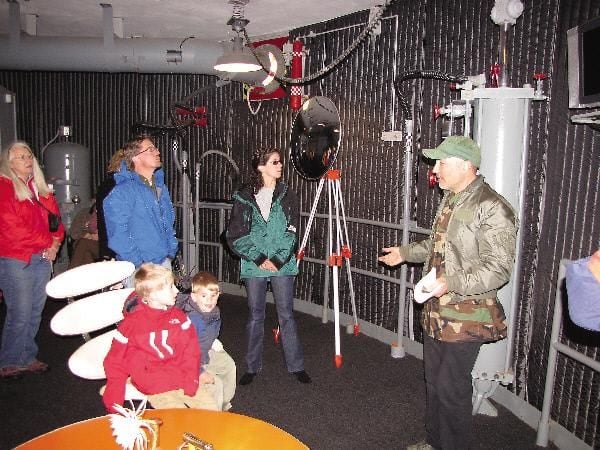 Owner Alexander Michael (right) talks about the history of the Lewis missile silo during a tour sponsored by Adirondack Architectural Heritage. 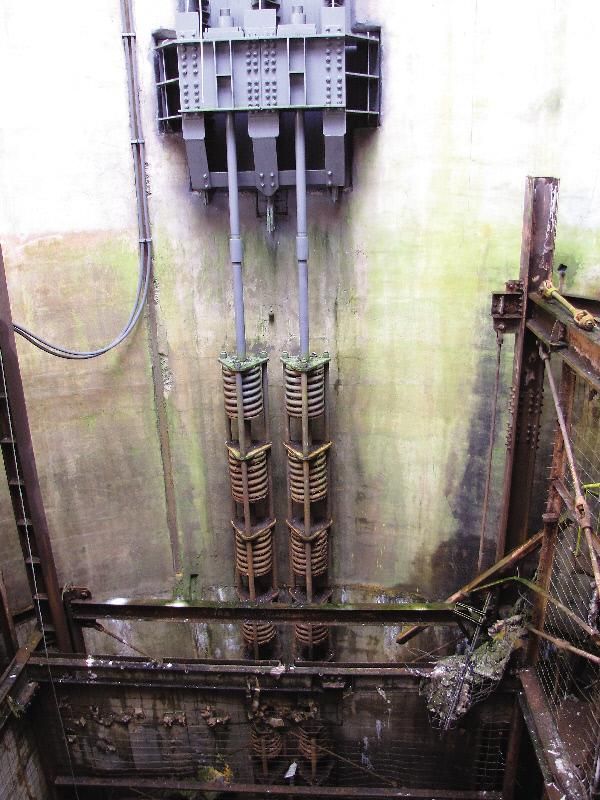 The command center, crew quarter and the missile itself were mounted on platforms cushioned by huge springs so they could withstand a nearby blast. 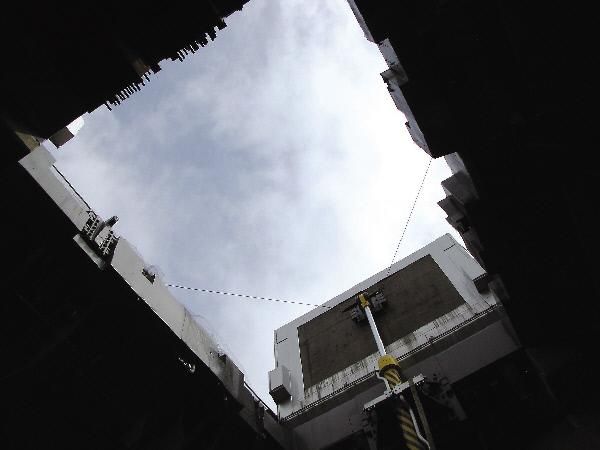 An open door can be seen looking up from inside the silo. The hydraulic lifts for the doors were found sitting in a Keeseville junkyard and are being restored to working condition.

The launch control panel in the command center looks much like it did in the days of the Cold War.

Owner Alexander Michael (right) talks about the history of the Lewis missile silo during a tour sponsored by Adirondack Architectural Heritage.

The command center, crew quarter and the missile itself were mounted on platforms cushioned by huge springs so they could withstand a nearby blast.

An open door can be seen looking up from inside the silo. The hydraulic lifts for the doors were found sitting in a Keeseville junkyard and are being restored to working condition.

A couple who wants their wedding to be a real blast may someday have an exclusive new venue to consider.

The setting is unique, a nearly limitless number of guests may mingle on multiple levels and the sound system is impeccable. And while the bang for the buck won't be a four-megaton nuclear warhead, a celebration at Alexander Michael's 174-foot-deep, 54-foot-wide Atlas-F ICBM silo in Lewis promises to be a memorable experience.

"For my end game, I want to convert it to a habitable space," he said.

The Australian architect and designer, who purchased the silo in 1998 and has been restoring ever since, cited weddings, dinner parties, concerts, art exhibits or even a disco as some of the possibilities that would go well with his "wonderfully dramatic" setting.

"It fascinates me how great the acoustics are in here," he said.

The silo, sunk entirely underground and protected by a pair of 70- to 90-ton blast doors designed to withstand a direct nuclear hit, adjoins an underground command center and crew quarters connected by a rounded underground passageway. It was one of 12 built during the height of the Cold War in the early 1960s in a ring surrounding Plattsburgh Air Force Base (PAFB).

Between 1960 and 1965, 107 missile complexes were constructed surrounding 10 different Air Force bases throughout the country. Deterrence was the object of the huge cost and herculean construction effort in the days of MAD (mutually assured destruction). "The fact that they were here and they were armed was really the weapon, not the warhead," Michael said.

Obsolete and abandoned nearly as soon as they were completed, the PAFB sites were among the few that didn't have to be imploded as the result of nuclear-arms treaties with the Soviet Union. They were sold as surplus property by the General Services Administration, with most going to local governments and salvage operations.

At many sites, highway departments and private businesses still use the above-ground Quonset huts for storage. Their valuables and historic relics scavenged, the old missile sites in the North Country remain largely in various states of disrepair, although some enterprising owners have been trying to fix them up.

Along with Lewis, the site in Redford is the most complete, reconstructed into a luxury above-ground/underground private home, but it is a non-historic restoration.

For a time, before Michael purchased it from a salvage operator, the Lewis site served as a giant cosmic-ray detector for researchers at Plattsburgh State.

Michael has converted the circular, subterranean crew quarters and command center into a habitable living space. Mounted on huge shock-absorbing springs, they are constructed one on top of the other and connected by a spiral stairway.

The original character and much of the historic layout and equipment has been maintained. Asbestos flooring has been removed, and everything has been sandblasted and brightly painted.

On a recent Saturday, tours of the site were sponsored by Adirondack Architectural Heritage (AARCH), a nonprofit Adirondack Park historic-preservation organization. That agency says the Lewis silo is one of the most complete in the country and may contain the only original and livable control center.

Bonnie Elliott was drawn to the AARCH tour due to memories from the days when the missiles arrived at the silos in the early 1960s. She recalls the excitement of the trucks bearing the huge projectiles negotiating the narrow Adirondack roads.

"It was amazing, especially for Willsboro," she said. "The old bridge was there. They had an awful time getting around that curve."

Before Michael can finish off the silo, the huge blast doors — currently in an open position — will have to be restored to working order, a monumental task. Opening and closing the rusting hulks has been a huge challenge for many missile-site owners in the North Country.

Michael needed a 90-ton crane and 60-foot manlift just to repair the superstructure on the various levels beneath the silo doors. But the hydraulic rams that opened and closed the massive structures were missing from the site and at first eluded him.

"They were found in George Moore's junk yard," Michael said of the Keeseville business they'd been sitting for 25 years.

Michael's restoration effort has been hampered not by his imagination but by the limited time he's able to spend at the site and by the prodigious cost. He flies from Australia twice a year to spend three weeks working on his project. "I can't even imagine what I've put into it," he said.

He first heard of the missile silos when he read about a restoration effort of one in Kansas that its owner had made into a home.

"I thought that was the hottest thing I'd ever heard of," he said. "He got back to me and told me this (one is Lewis) was for sale."

The main attraction of the Lewis site was that it's one of the few that doesn't fill to the brim with water if the pumps are turned off. Michael looked at three other missile sites in the area, including one in Ellenburg that he could have gotten a lot cheaper. But he paid the $180,000 price tag for the dryer Lewis site, which also had more original historic content.

In fact, to help with the work and the cost, Michael has been looking for a partner.

"I get quite a few people who inquire, but they're always a little bit funky," he said, recalling that one had an "underground obsession" and some are survivalists.

One wanted to subdivide and sell underground chambers for the end-of-the-world set. Some share the passion but don't have the funds or don't want the responsibility.

Michael said it would be a huge advantage to have a partner who is local, as it's difficult to be an absentee landlord.

Still, he doesn't find the work discouraging. As soon as he gets bored with a project he leaves it, but that isn't likely to happen here. When asked about his many restorative achievements, Michael had trouble picking out what he liked the best.

The thing I'm most proud of is my waterfall," he laughed, describing the landscaping feature in his "surface world" on the silo grounds. "I like any environment I work on to be attractive."

, 64, of Route 3, passed away peacefully on Wednesday, September 15, 2021 at Granville Center. after a long battle with MS. She was born in Alexandria, LA on October 18, 1956 the daughter of George and Anastasia (Bourikas) Dacre, Sr. Services will be private for the family. Arrangements have…

Calling hours for Patricia Lobdell will be held on Monday, Sept. 20, 2021, from 2 to 4 p.m. at Zaumetzer Funeral Home, Au Sable Forks.