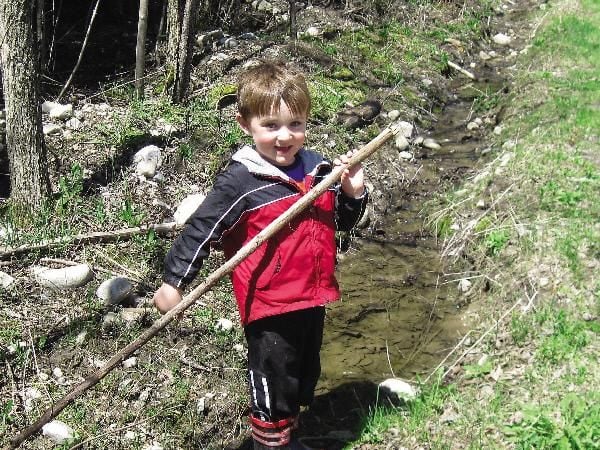 Colin McMahon recently went on a hike and is feeling much better. Treating Lyme disease early can help prevent worsening conditions caused by the bacteria that causes the disease. Taking precautions whenever in deer-tick environment is also essential. 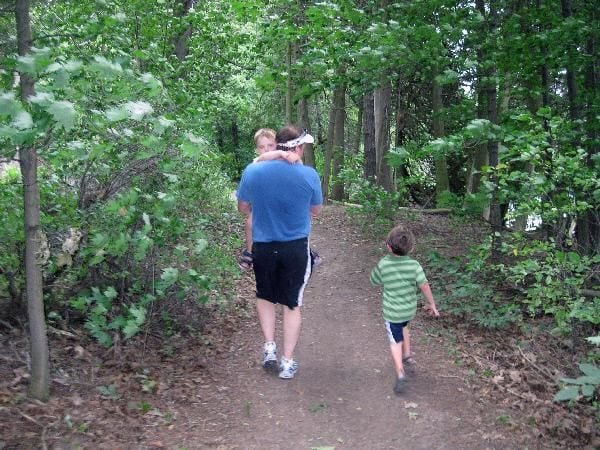 Colin McMahon is carried by his dad, Scott, during a hike earlier this year. As a younger child, Colin always loved walking in the woods but became tired quickly from effects caused by Lyme disease.

Colin McMahon recently went on a hike and is feeling much better. Treating Lyme disease early can help prevent worsening conditions caused by the bacteria that causes the disease. Taking precautions whenever in deer-tick environment is also essential.

Colin McMahon is carried by his dad, Scott, during a hike earlier this year. As a younger child, Colin always loved walking in the woods but became tired quickly from effects caused by Lyme disease.

As the North Country attempts to dry out from an excessively wet spring, families have started to look for a variety of outdoor activities to enjoy their times together.

A walk in the woods can be a special occasion for any family, but spending time outside can include hidden dangers that parents should keep a watchful eye out for.

One such danger that can go unnoticed is the bite from an insect carrying the bacteria that causes Lyme disease, an infection that can affect the joints, heart and nervous system if not treated early.

"This has become a most vulnerable time for children," said Darlene McMahon, whose 4-year-old son, Colin, was diagnosed with Lyme disease in February but more than likely contracted the infection more than a year earlier.

"We're all pressing our kids to get outside and do more, but there is a serious lack of education about Lyme disease. We need to create a greater awareness," she said.

McMahon and her family moved to the Plattsburgh area last August from Rutland, Vt. She is not sure where Colin may have been bitten by an infected tick or other insect known to carry the bacteria, but she has her suspicions.

"We were renting a house in Rutland right across from an apple orchard where we saw tons of deer. We used to play with Colin in that orchard quite a bit. There's a very good chance he got infected there," she said.

The other possibility McMahon has considered is the Lake George region where the family has done quite a bit of hiking with Colin's grandparents.

Regardless of the source, Colin never came down with the typical symptoms of Lyme disease, including the bull's-eye rash, headaches, fever and fatigue.

"My son developed behavioral issues," McMahon explained. "Last summer, he began to show symptoms of ADHD; he was very impulsive and couldn't focus. His day care said he was having trouble listening to stories."

Colin was also having difficulty sleeping and complained of fears that monsters were hiding in his room. He was also beginning to complain of aches and pains.

"We'd go hiking, and he'd walk 200 yards and want to be carried," his mom said. "When he was 18 months (old), he'd go hiking for miles with his grandparents. Now I spent each night massaging his feet because of the pain."

Colin's personality changed, and symptoms seemed to emerge overnight. He had always been a social young boy but now complained that kids did not like him and was no longer the class leader. He would hide under tables in school or be reluctant to leave his mom when she dropped him off.

He eventually had to leave pre-K and had to stop going to swimming lessons and playing soccer, his mom noted.

"He couldn't attend birthday parties where there might be too much loud noise because of sound sensitivity," she said. "He had extreme light sensitivity and needed sunglasses outside always."

He then developed a tic, repeatedly swiping his forehead and complaining about a tickling sensation. His parents brought him to his pediatrician, who suspected Lyme disease but suggested taking Colin to a specialist in treating the infection.

"I highly recommend a special lab test for Lyme disease," McMahon said. "A lot of people get the standard Lyme test, and results come back negative."

McMahon's foray into the complicated world of Lyme disease has prompted her to become proactive in promoting Lyme-disease awareness.

She has met several parents online who have shared similar experiences, and she is creating a website dedicated to Lyme-disease education for parents that she hopes to have up and running shortly.

Meanwhile, Colin has been on antibiotics the past several months, and 90 percent of his symptoms are gone, his mother said.

"If identified early enough, typically within six weeks, the infection can be stopped without reaching the more serious stages," she said. "With Colin, we identified the disease more than likely a year after he was infected. Hopefully there will be no long-term effects.

"Had we caught Lyme disease earlier, Colin would not have to be taking all of these antibiotics for an extended time. Lyme specialists will tell you that symptoms get worse before they get better."

Protection is a key to preventing Lyme disease. Bug spray is a necessity, though McMahon noted that many parents are hesitant to use bug spray that contains DEET.

"Avon's Expedition is a bug repellent/SPF lotion that repels ticks," she said. "No spraying. No DEET."

The deer tick is the insect of most concern with carrying Lyme disease. Ticks typically live in moist and humid environments, particularly in wooded or grassy areas.

Parents should always conduct an inspection for ticks whenever returning from outdoors, even if just in the back yard. Areas that should be checked include:

▶ In and around the ears

▶ Back of the knees

▶ In and around all head and body hair

If a tick is found, parents should remove the insect using fine-tipped tweezers immediately. If a tick is attached to the skin for less than 24 hours, the chance of getting Lyme disease is extremely small. To be safe, parents should continue to watch for signs or symptoms of Lyme disease such as rash or fever, and see a health-care provider if these develop.

Families can also prevent family pets from bringing ticks into the home by maintaining a veterinarian's care. Two ways to get rid of ticks on dogs and cats are by putting on tick medicine or using a tick collar. These products should be used according to the package instructions.

In 2009, 90 percent of the nation's Lyme-disease confirmed cases were located in 12 states in the Eastern and Midwestern United States, including New York. Most cases of Lyme disease in the state were located south of Albany.