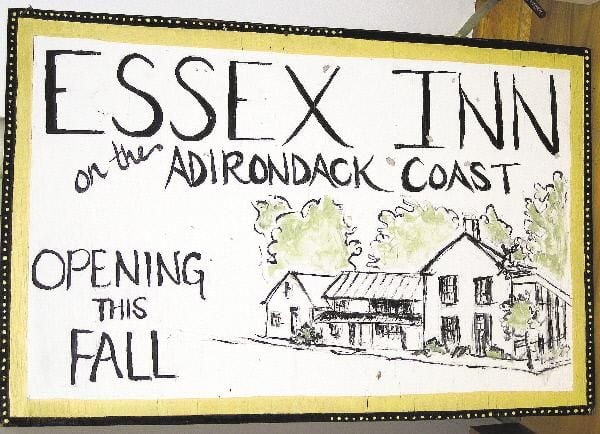 An old Essex Inn sign is displayed in one of the rooms. 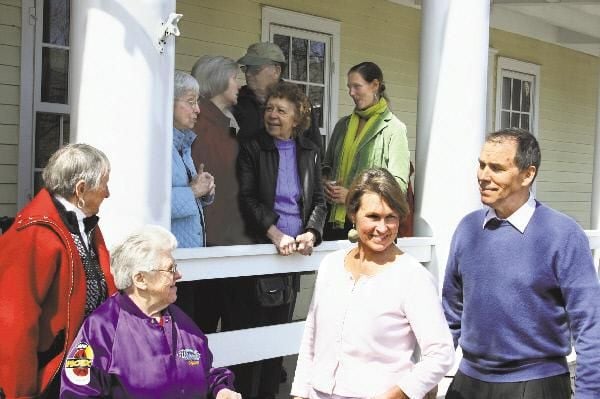 Karen and Rick Dalton discuss their plans for the Essex Inn with some visitors.

An old Essex Inn sign is displayed in one of the rooms.

Karen and Rick Dalton discuss their plans for the Essex Inn with some visitors.

Early on, Rick and Karen Dalton took down the fence between the Essex Inn here and the senior center behind the historic property.

"We told them (the seniors) would be the first guests to have lunch here," said Rick, who with his wife bought the inn last year and had it renovated.

At that lunch, senior citizens reminisced about their memories of the inn; high-school students from Willsboro caught those stories for a video production on the history of Essex and its inn.

"This is a place to learn about local history, and for the students to develop a bond with senior citizens," Rick said.

The Daltons will have others operating the inn; they've kept one part of the facility as the new headquarters for the College for Every Student (CFES) organization they run. The Willsboro students are part of that program; they will present their completed multi-media project to the seniors who participated during a lunch at noon Monday at the inn.

"We are reaching out to bridge the gap, as there is often a lot of knowledge that gets lost," she said.

Though not conclusive, it is believed the inn dates back to 1812. In 1829, two buildings were put together to expand it. Memorabilia, such as photos of the bygone days of the Essex area and various artifacts, is placed around the inn.

Several items were found in the walls during the renovation. Among them was a handwritten note that says: "I hope your (sic) not ripping this place apart like I did in 1986," JSA Comp.

There is also a shoe that dates from the 1800s.

It was a common practice to place a worn shoe in a perceived weak place in the structure to ward off evil.

Rick Dalton has a history with Essex as well.

"I first came to the area when I was 5, and my family continued to come for about 10 years, so Essex and Lake Champlain became part of my blood."

Rick worked at Middlebury College, and about 20 years ago, he and Karen founded College for Every Student. They always had plans to someday move to the Willsboro/Essex area. When the price of the inn started to drop, the Daltons decided it was time to purchase it, and they closed in the spring of 2010.

Though initially thinking of just creating office space, they ended up with a complete renovation.

"We're now probably the poorest people in Essex," Dalton quipped, "but don't regret what we have done."

Because the inn was closed for many years in the mid-1900s, and families used it as a residence, most of those who were around at the time didn't have memories of it being utilized for its initial purposes.

"Back in the 1970s, my husband and I used to play cards in the kitchen with the Hulberts (family who lived there then)," said Arlene Bigelow at the open house/luncheon.

"I remember there was a co-op when I was young. It had flour for 20 cents a pound, and the meat would come from Plattsburgh," said Bernice Marcotte. "We often sat in the back room of the co-op and froze."

Christine Provost did house cleaning at the inn.

"I would have to clean the whole upstairs. The rooms were smaller, and there were no bathrooms in the rooms — just a shower. It wasn't fancy."

"I didn't come in the inn very much," Gladys "Babe" Hays chuckled. "Though I used to sit at the bar.

"It was never like this," she said, indicating the new décor.

"I remember the bedrooms being smaller, and they shared bathrooms. It was not very fancy, or very clean, but the owners were nice people.

"The meals I had there weren't very good," Gladys continued. "Also, the tables were so small you couldn't fit too many people around them.

"I hope and pray the new owners make it."

Gert Grady said her husband, Ed's, family bought a camp on Willsboro Point in the 1920s for $60.

"We didn't travel much in the 1920s and 1930s, so we didn't get to Essex that much. I remember a screw-drive locomotive at the mill that was owned by the Paine family."

"I was in the hotel quite a few times visiting Caldae and Ed Hulbert who owned it," she continued. "The kitchen was kind of weird to me as a child because it could serve so many people, but only the Hulberts lived there.

"It was not updated for the time," Shirley said, "but then again, neither was the farmhouse I lived in, as we had no electricity and running water.

"Since the inn was not being used, it was kind of spooky to walk down the long halls with all those doors, but no one in the rooms," Shirley continued. "I had thoughts of ghosts."

"Generally there was no one there in the winter, but in the summer Ed would sit on the front porch and talk and tell stories. The porch seemed so long, and once I decided to run and jump over the railing at the end and fell face first on a flat rock."