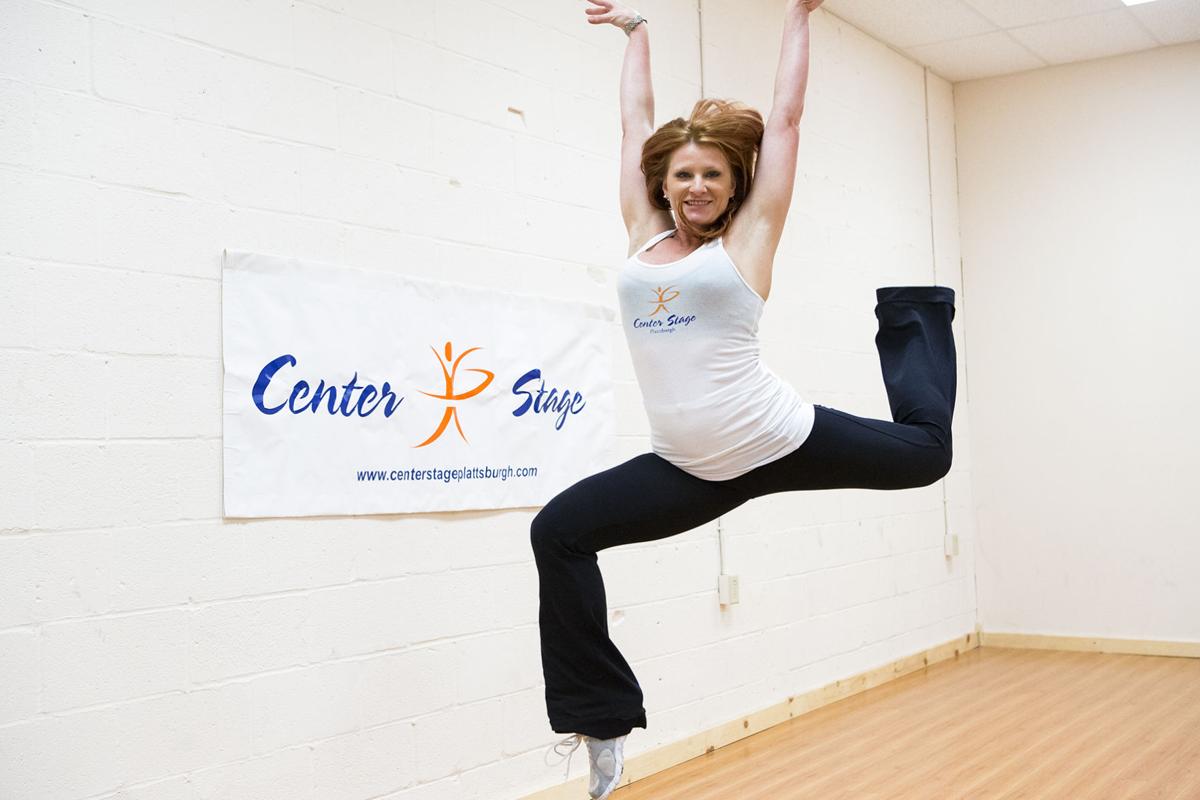 P-R Photo/Gabe Dickens Heather Van Arsdel shows one of her routines at her new location. The new space includes two dance studios -- the smaller includes a one-way mirror while the other has two cameras that broadcast to flat-screen televisions in the lobby and waiting area -- a merchandise room and a host of other improvements with room to expand. 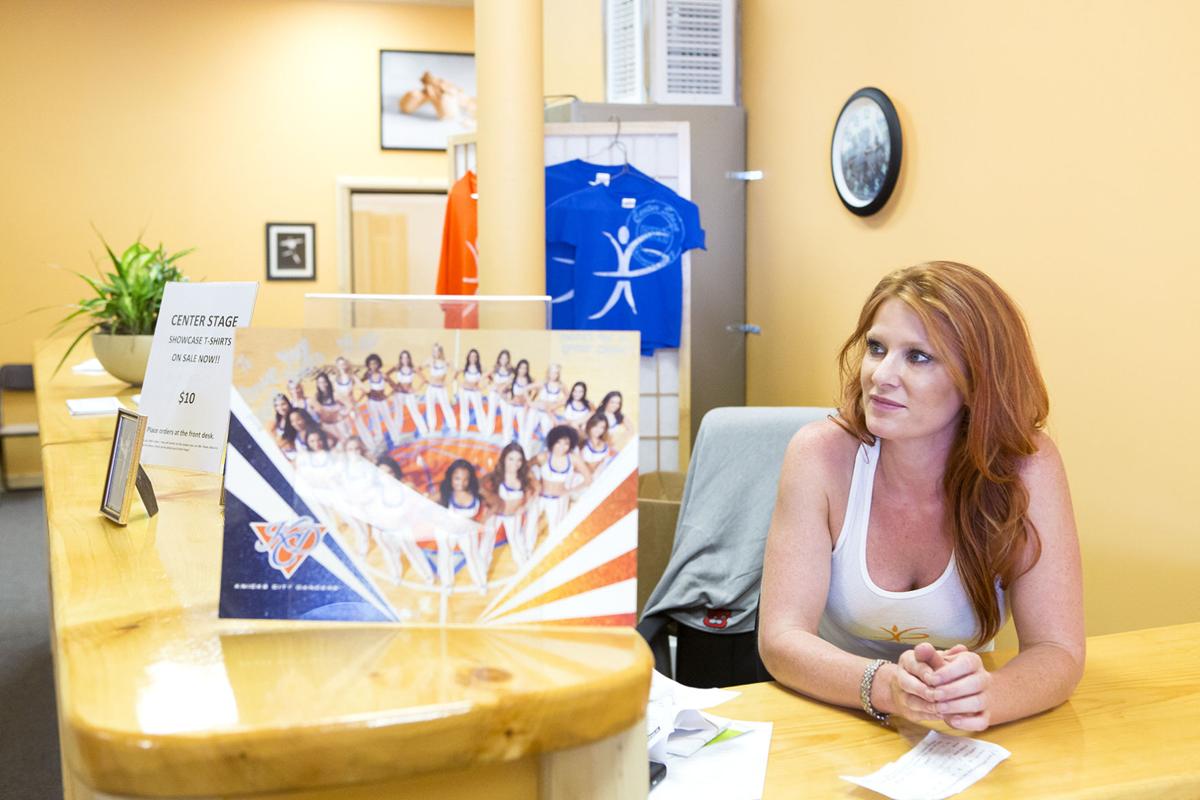 P-R Photo/Gabe Dickens Heather Van Arsdel shows one of her routines at her new location. The new space includes two dance studios -- the smaller includes a one-way mirror while the other has two cameras that broadcast to flat-screen televisions in the lobby and waiting area -- a merchandise room and a host of other improvements with room to expand.

A new and improved Center Stage is open in the City of Plattsburgh.

Heather Van Arsdel has moved the business to Suite 16 in the northwest corner of Plattsburgh Plaza. The business had previously been on Weed Street since March 2011.

“We’ve tripled our size,” she said, adding that she now has almost 3,000 square feet of space.

Van Arsdel and the other four instructors have approximately 200 students, which is also about three times as many as in the early days.

“That’s pretty good, considering we only opened two years ago,” she said.

One features marley flooring, a professional-type flooring preferred for ballet and classical dancing. It also has a one-way viewing window so parents can watch without bothering the students.

The other has wood flooring and is 38 feet long, so there is plenty of room for gymnastics routines. It has a closed-circuit camera that transmits to flatscreen televisions in the lobby area, which also has a built-in aquarium.

Van Arsdel said her significant other, Nate Graves, some of his friends and his father, Brad Graves, did the renovation work.

“They were so generous with their time,” she said.

She estimated she spent about $15,000 on supplies, such as the flooring, mirrors and gymnastics mats.

The studio’s apparel store features a number of pictures of Van Arsdel in action with the New York Knicks City Dancers. She was part of that team from 1998 to 2004, and that experience is reflected in the studio’s orange and blue color scheme.

Van Arsdel was also a Liberty Torch Patrol dancer for the WNBA’s New York Liberty during that time. She also coached and choreographed the elite Knicks City Kids dance team starting in 2001.

There are also pictures of her with other members of the dancers on David Letterman to read a Top Ten list and with former President Bill Clinton. She is also pictured with 30 Rock creator and star Tina Fey, as Van Arsdel was the choreographer for the opening episode of that show for the 2012 season.

“Tina was awesome to work with,” Van Arsdel said. “She picked up the steps very easily.”

Van Arsdel spent a lot of time at her mother’s dance studio in Titusville, Fla., while growing up. That gave her a great background in many forms of dance.

At 15, she was commuting to Orlando, Fla., to train at The School of Performing Arts and at the Southern Ballet Theatre. Van Arsdel spent parts of her junior and senior years performing a variety of roles at Walt Disney World.

She earned a associates degree in arts and dance at the New World of the Arts College in Miami. She studied music, choreography and modern dance, including the styles of Martha Graham, Limon, African, jazz, point and contemporary.

Two years later she moved to New York City and studied at the American Academy of Dramatic Arts.

Van Arsdel came to Plattsburgh to work at WPTZ in 2007, with previous experience in that field in Baton Rouge, La., for about a year.

Locally, she started teaching a hip-hop class at the City Recreation Center while still a reporter at WPTZ. That really took off, and she hasn’t looked back.

“I never thought I would open a dance studio,” she said. “I love it.”

Center Stage has two invitation-only dance troupes that perform at local events and for local groups. One is for 6 to 12-year-olds and the second is for middle-school and high-school students.

One of the Knicks City dancers recently came to Plattsburgh to do a clinic, Van Arsdel said.

Fall registration is underway. Prospective students are asked to call 536-6093 or use the link on the studio’s website, www.centerstageplattsburgh.com.

Van Arsdel said she is thrilled with the new studio. She said there is even room to add another studio if business continues to increase.

“The potential at this location is very good.”

82, of Reber Road, Willsboro, died Monday, in Elizabethtown. Born in Elizabethtown, September 23, 1937, the daughter of Duward and Mabel (Baker) Mason. An obituary will follow. Arrangements are in the care of the Hamilton Funeral Home, Peru.

58, formerly of LaValley Road, Mooers, and son of the late Albert Eugene and Mae Madeline (Mesec) Poissant, died Friday. Burial will be in St. Joseph's Cemetery in Mooers. Arrangements are with the Hamilton Funeral Home, Mooers.