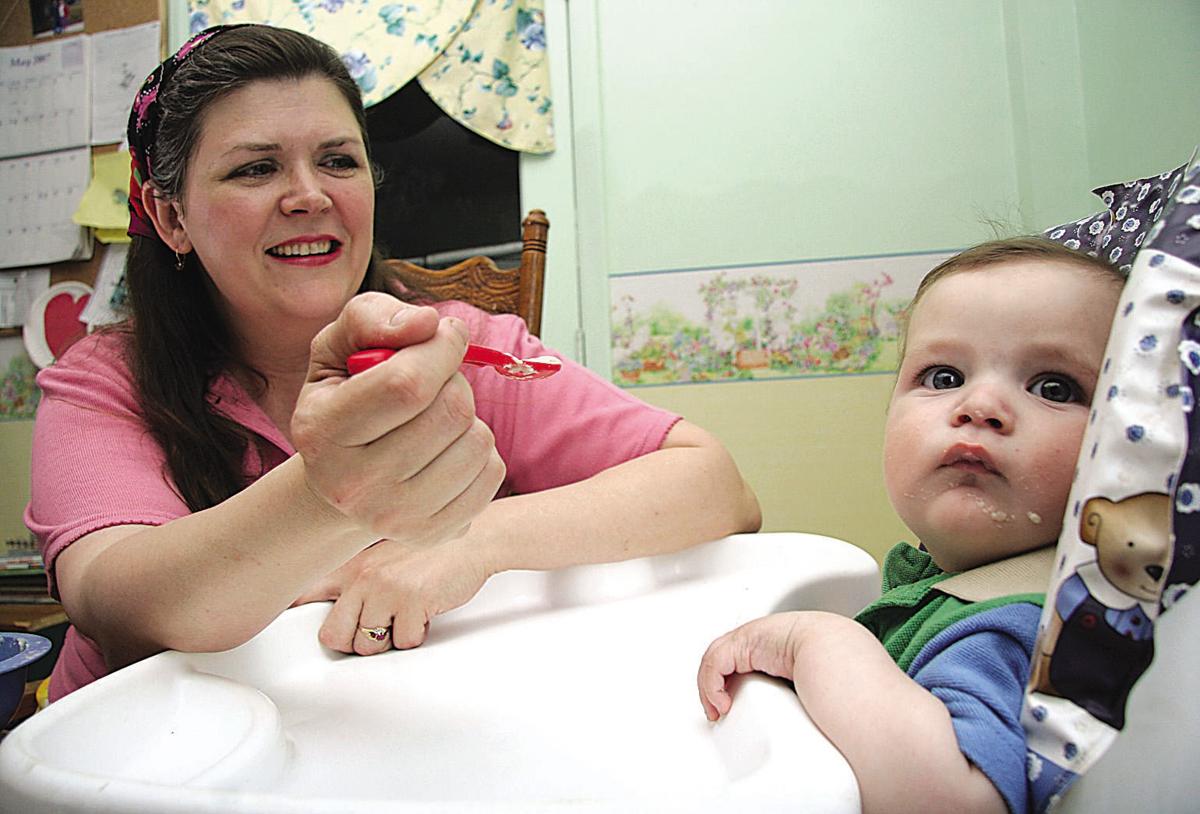 Dawn Curtis feeds her youngest son, Arthur, 7 months, in the kitchen of her Keeseville home. Arthur is one of Dawn-s 10 children. Dawn is not only a full-time mother, but she also home schools her children 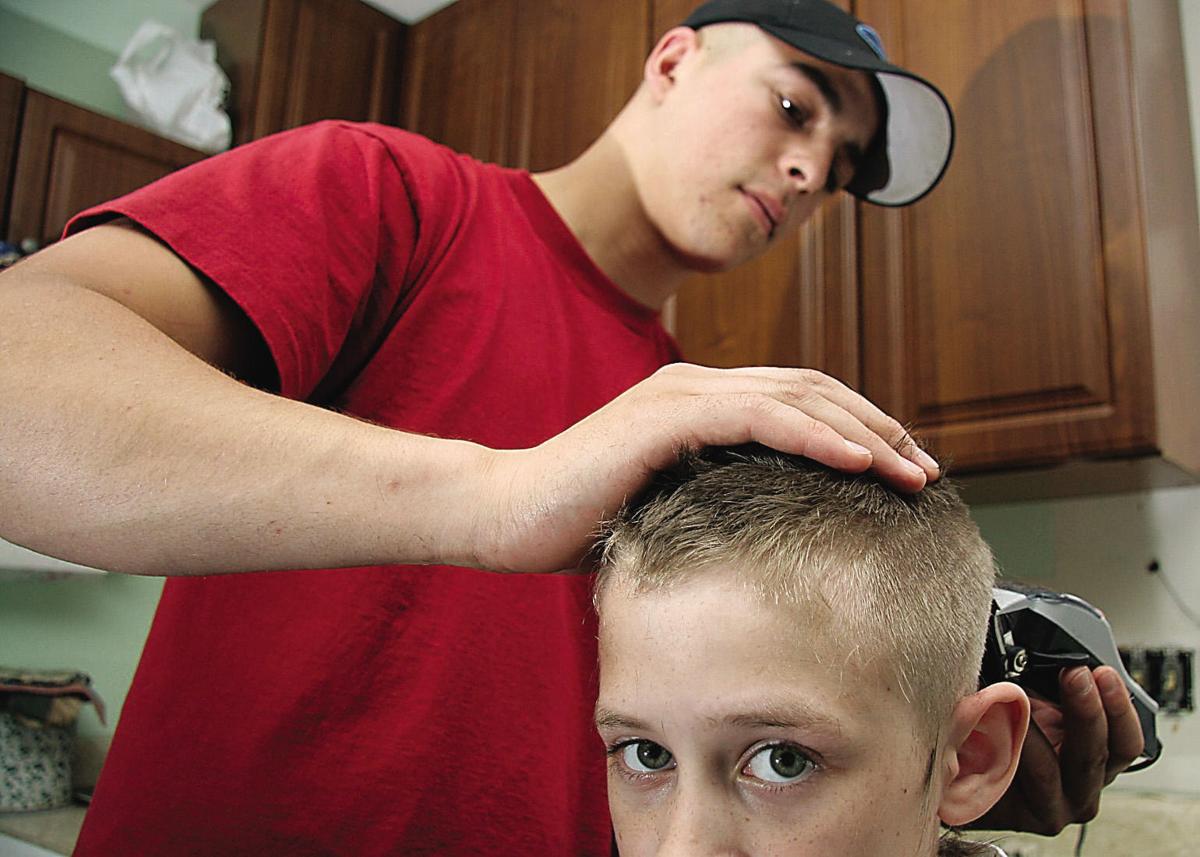 Cooperation is key for a family with 10 children. Bryant Waggoner, 19, cuts Blake Curtis, 10, his little brother-s hair as the other children play in the other room

Dawn Curtis feeds her youngest son, Arthur, 7 months, in the kitchen of her Keeseville home. Arthur is one of Dawn-s 10 children. Dawn is not only a full-time mother, but she also home schools her children

Cooperation is key for a family with 10 children. Bryant Waggoner, 19, cuts Blake Curtis, 10, his little brother-s hair as the other children play in the other room

KEESEVILLE -- When Dawn Curtis was young she dreamed of having eight kids, but today she celebrates being a mother 10 times over. "Sometimes I put in earplugs," she joked. She home schools eight of the children in her Keeseville house and cares for two dogs and two parakeets. Elliot, Benjamin, Blake, MaryElizabeth, Evelyn, Joyce, Melody and Arthur are all at home with parents Dawn and Bob Curtis, who is retired from Georgia-Pacific. Their large family also includes two older sons, Tyler and Bryant Wagner. "I think they'd be lost without it," said Dawn of the family. "Even though they might complain about, oh, this one took my toy,' they're never lonely. They don't even know what it would be like with no one to play with." As far as playmates go, if one sibling is angry at you, just find another one, Benjamin said. "It works out that the ones that are closer in age are pretty close," Dawn said. Bryant, 19, and Tyler, 21, have a strong relationship. As do Elliot, 15, and Benjamin, 14. Younger children Blake, 8, MaryElizabeth, 6, and Evelyn, 5, share many of the same experiences. Then the babies of the family Joyce, 3, Melody, 2, and Arthur, 7 months, demand a little more of Dawn and Bob's time. "It's an experience," said Bryant, the oldest brother living at home. He graduated from a private church school and graduated from Clinton Community College Friday. "The kids swarm him when he comes in the front door," Dawn said smiling. Family Organization The large family runs smoothly because Dawn has an organized plan. "I'm a big sucker for books about how to organize your house," Dawn said while sitting at her long kitchen table. To her right hangs a large chart of chores. Below that, on a shelf, school books with the little one's beginning handwriting lessons are neatly piled. "We have a structured flexibility," Dawn said. Schoolwork, music lessons, chores, personal projects and Bible training are all planned throughout the day. By completing their tasks, they follow an award system set up by Dawn. "They get to sleep in Saturday morning, that's a reward, which they don't get if they don't get enough points for the week," she said. "If they really don't do good, they get penalties -- they get things taken away, they have to do other kid's chores, stuff like that. And then the little ones have incentives, like they get stickers." Right there at home, and in numerous social activities, life's lessons are taught early. Dawn starts training them from 8 years old to do their own laundry. "You have to let the kids know what you expect," Dawn said about rules. "They know what they are and what they aren't supposed to do." Sometimes there are challenges. "Getting everybody's name straight," Bob joked. Not to mention providing food, housing and clothing for such a large family. "Storage becomes a challenge," Dawn said. She estimates they only spend about $150 on food each week, and clothing is not a big issue either. "We get a lot of mileage out of our clothes," said Bob. Home schooling With the exception of Arthur, each receive schooling in a curriculum-based atmosphere. To the left of the dining room is their classroom stuffed with chairs, desks, charts and posters, as well as computers. "From third grade on, they use the computer for their schoolwork, which helps me a whole lot. So, this program does a lot of the grading for me." And mom makes sure her kids progress. "They're not allowed to fail," she said. "If they don't get something, they just have to keep at it until they get it." "We adjust a lot and that's what I love about home-schooling." Seize the Day The family hasn't always been this close. For a while, when Tyler and Bryant were young, both parents worked. "If you don't spend time with your kids when they're 5, when they are 15 you won't see them." Now she rarely sees Tyler, and Bryant is going off to Marine Officer Candidate School. "I see a lot of parents making the same mistake that I did," she said. "I would encourage people to get to know their kids better. Spend more time with your kids. Cool down a bit. Enjoy them," she said. Bob mentioned that some parents miss that period and look forward to being grandparents, but for them the segue from parenthood to grandparenthood isn't that far off. "Eventually, I'll have an empty nest, but by the time that happens I'll have tons of grandchildren," said Dawn laughing.