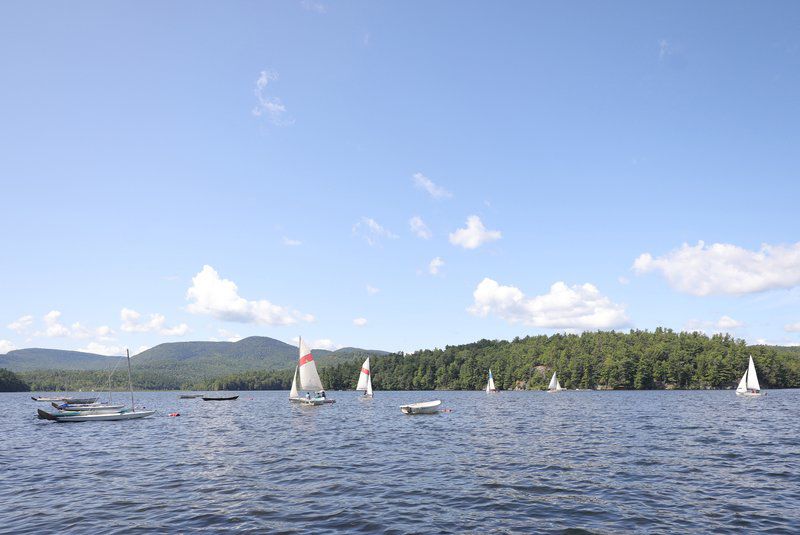 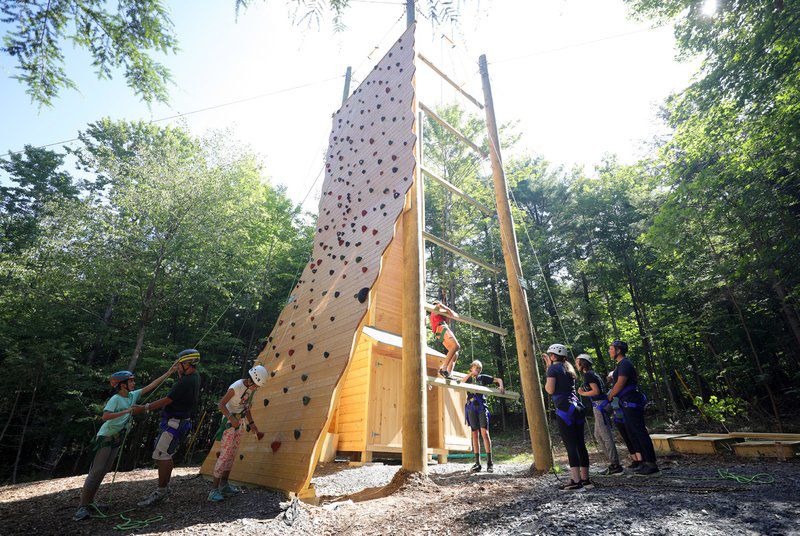 Campers from both Camp Whippoorwill and Camp Lincoln attempt to ascend the giant climbing wall with the help of counselors and fellow campers. 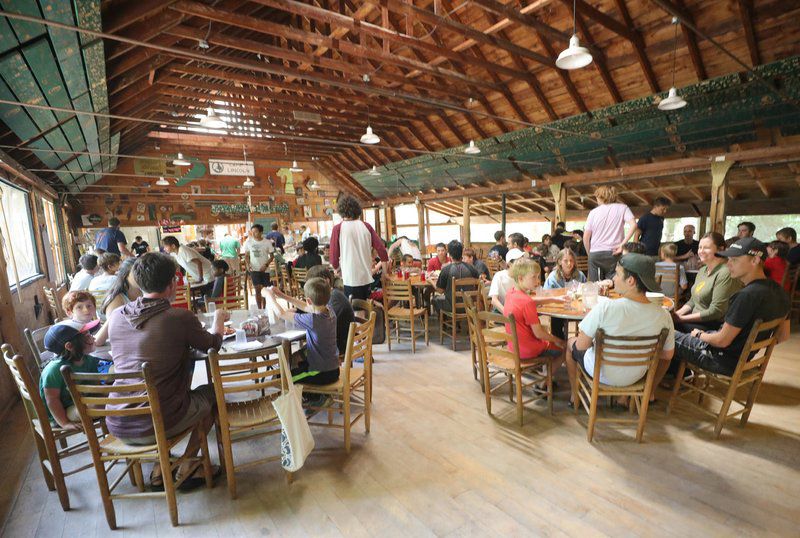 Campers from Camp Lincoln sit down for lunch after setting tables.

Campers from both Camp Whippoorwill and Camp Lincoln attempt to ascend the giant climbing wall with the help of counselors and fellow campers.

Campers from Camp Lincoln sit down for lunch after setting tables.

KEESEVILLE– Every summer has a story, and every story is a little different than the last.

Consulting Director Pete Gucker has experienced many of those summers in a place that always called him back.

A place that has captured the hearts of counselors and campers alike and kept them coming back for years to come.

“I can recognize every rock and every tree,” he said.

”It came to me that this is where I belong.”

Starting in 1920 as Camp Lincoln for Boys, and then North Country Camps in 1931 when Camp Whippoorwill for Girls was founded, the camps have operated under the leadership of three generations of the Gucker family and dedicated long-time staff without disruption for 100 years.

A feat that both camp staff and alumni are rightfully proud of.

Although every summer is special, celebrating 100 years made 2019’s summer camp season something to celebrate, especially with solidifying the camps future in the North Country with the founding of the North Country Camps Foundation.

The foundation’s board of directors is made up of staff, camper and parent alumni committed to the continuation of NCC and the legacy created by the Gucker family.

This not-for-profit foundation will “perpetuate the special qualities so revered by past generations of campers and staff, while also adapting to changing societal landmarks,” Gucker said.

The foundation also aims to encourage attendance from more local children with financial aid available to families who need assistance.

NCC features a boys (Camp Lincoln) and girls (Camp Whippoorwill) campus, located among 150 acres of forest and meadow land along the east shore of Augur Lake.

Although organized independently from one another, the camps operate as one organization under the same schedule and come together as one for a variety of fun and leadership building activities.

Unlike other camps, NCC’s are kept small with enrollment limited to 90 boys and 90 girls ages 8 to 15.

This allows NCC to maintain the tradition of keeping their camps more like a family or tight-knit community, rather than a formal institution.

This also allows for better human connection between the counselors and the campers, something that Whippoorwill Director Kate Green believes is essential to the overall community feeling of NCC.

“There’s so much warmth and connection,” Green said.

“Human connection is so important, and it’s alive and well (at NCC).

“We love being an intimate size camp.”

Gucker believes this human connection also leads to their campers development of independence, among other rewarding qualities gained during the experience.

“There’s camaraderie of working with a small group,” he said.

“The kids have a true sense of belonging.

“They genuinely feel part of the place,” Gucker said.

Campers can partake in a plethora of activities including hiking, camping and horseback riding.

NCC also takes advantage of their own piece of Adirondack paradise along Augur Lake, a North Country body of water very few get to see as the lake has no public access.

Campers learn to swim, dive, paddle and sail along the pristine lake’s surface with the occasional Augur Lake neighbor boating by, waving and smiling to counselors and campers, excited to see the progress campers have made in their water skills.

“The waterfront is a great location,” Gucker said.

New for this year is a climbing wall, giving campers the chance to learn climbing skills and conquer a fear of heights in a safe environment.

Work experience is also offered to campers and can include activities such as waiting tables, sweeping cabins or tending the horses and chickens, rolling the tennis courts and even building structures such as Adirondack lean-tos.

Campers are expected to choose from these activities and work experiences thus allowing them to develop independence and a sense of responsibility while being supported to be themselves by camp counselors and staff.

“We love giving that confidence to children,” Green said.

“They learn so much with the support of people (counselors and campers) around them.”

Camp Lincoln Director Doug Furman said this support system is one of the many NCC qualities that brings so much warmth to the camp community.

“As a counselor, it’s very fun to be a part of this and to provide somewhere where kids can be themselves,” Green said.

NCC’s purpose centers around giving campers and counselors an extended opportunity to live together simply in an outdoor environment that is not only safe and healthy, but sanguine and challenging.

NCC is eager to give campers the opportunity to have a say, live a life that is dynamic and purposeful, develop skills at their own pace and give them carefully supervised real adventure, arming them with the necessary skills that they will use outside of camp.

Having their own piece of the Adirondacks, NCC strives to improve campers’ awareness of the wilderness environment around them and continues to work with them in finding sensible ways to preserve it.

“They develop an appreciation for the wilderness and environment around them,” Green said.

This appreciation for the wilderness and the environment around them is also heightened by the camp’s rule of no technology, something that NCC staff agree greatly helps the sense of community in the camp.

“It gives them a break from technology,” Green said.

“They’re having fun and learning new skills without looking at screens,” Furman said.

Gucker said that more often than not, the kids barely notice the time without technology.

“There’s so many activities, and they’re having too much fun to even notice they’re without it.”

COMING BACK FOR MORE

Gucker has always enjoyed working with kids. It’s one of the main reasons why he came back every summer, while holding a teaching job in New York City for 37 years and raising his family in New Jersey.

“The camps have been my central focus,” said Gucker, who took over for his father and founder of Camp Lincoln C. F. “Chief” Gucker, in 1961.

“Essentially I grew up here and always have felt more rooted here,” he said.

“I have never thought of working at camp as a job.”

NCC’s staff feels the same about its work at the camp.

Green, originally from England, was 19 years old when she first came to work at NCC as a counselor.

“I kept asking myself what I was going to do with my summer,” she said.

“I know I wanted an adventure.”

That adventure led to her being placed at NCC through a camp counselor program.

“It’s such a warm and important place,” she said.

“I consider myself lucky to have landed here.”

Green has since spent 22 years at the camp, climbing up to her current position as director.

Camp counselors and staff are not the only ones who repeatedly return.

With a high return rate, close to 90 percent, most campers come back.

NCC also sees these repeat campers or “alumni” come back to work as counselors and occupy other staff positions.

Green said it’s rewarding to hear back from past campers and alumni about their experiences at NCC.

“We hear from a lot of people saying their choice of focus (in college) can be traced back to activities or experiences they had at camp,” she said.

Gucker would like to see more local campers at NCC.

“It’s intriguing to learn about places and activities you can do in your own backyard,” he said.

“I think there are local children who can benefitin many ways from a camp experience, not the least of which is to live and play with youngsters from a variety of different backgrounds”

North Country Camps is also fortunate enough to have a generous scholarship fund, helping to make the summer camp experience attainable to families who may need help.

Green agreed and thinks the opportunities are endless for kids at summer camps, regardless of where they’re coming from.

“Kids are going to have fun in a safe environment and learn new skills they might otherwise never learn,” she said.

“They can find role models in their camp counselors and friends among campers.”

North Country Camps will be holding an open house information event on Friday, Jan. 17th 2020. For info on the location and time of the open house, email directors Kate Green and Doug Furman at directors@northcountrycamps.com

For questions about the scholarship fund email directors Kate Green and Doug Furman at directors@northcountrycamps.com

For more information of North Country Camps and their mission visit northcountrycamps.com