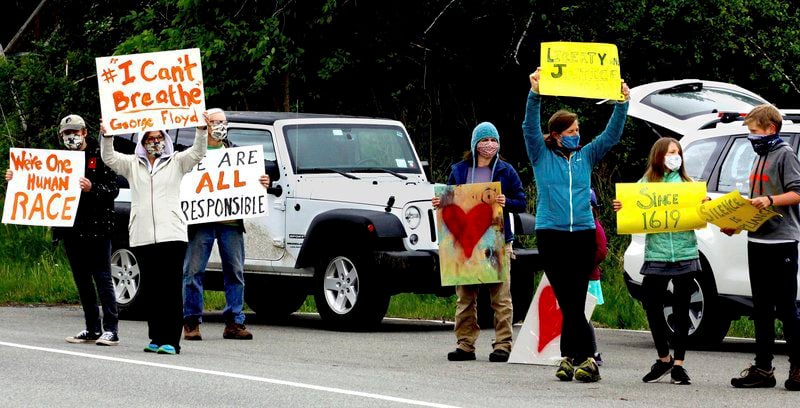 About 150 people, some in family groups, line Route 73 in Keene on Sunday holding signs protesting the death of George Floyd in police custody on May 25 in Minneapolis. 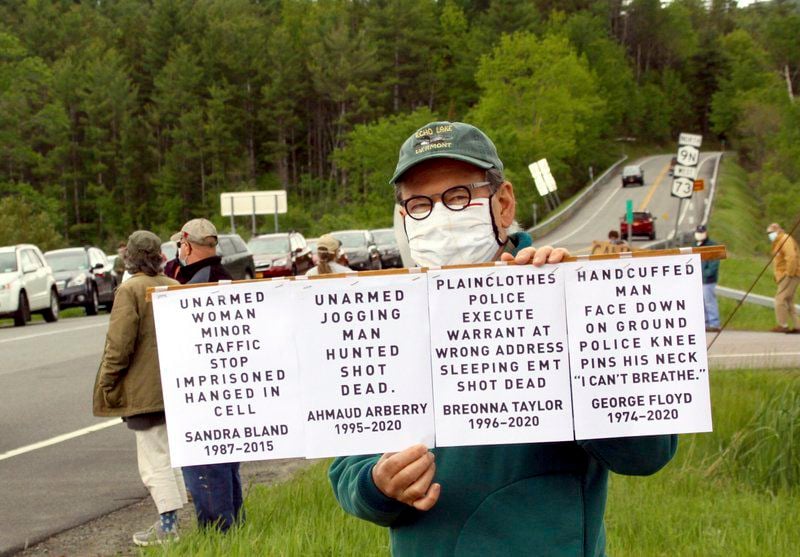 About 150 people, some in family groups, line Route 73 in Keene on Sunday holding signs protesting the death of George Floyd in police custody on May 25 in Minneapolis.

KEENE — Gripping their signs tightly to counteract stiff winds, about 150 participants lined up along Route 73 at the junction of Route 9N to voice their feelings concerning events surrounding the death of George Floyd and others.

Although at times vociferous in an attempt to have their voices heard by passing motorists, the event stressed unity and peaceful protest.

Well over half the drivers along the busy highway tooted their horns in support along the close to half-mile roadside line-up, which was extended due to social distancing required by COVID-19 precautions.

Monique Weston, one of the organizers gave her rationale for the rally.

“The horrors of continuing racism and all the murders of unarmed African American men, has incited me to protest as a member of a white, privileged, and caring community," she said.

"As an overwhelmingly white community we can make a statement that white folks are horrified by racism that demeans and attacks fellow human beings.”

Floyd, an African American man, died May 25 in Minneapolis after a white police officer held his knee on his neck as he was lying on the ground handcuffed.

Carole Slatkin summed up what several of the other attendees had also expressed.

“George Floyd is only the latest in a 30-year list of black men who have been killed by police, instilling the feeling of racism in this country," she said.

"And I want to bring attention to the fact that, as a white person of privilege in this country, I cannot understand what it means to be a black person. I am profoundly outraged by the brutality that black people face on a daily basis.”

Addressing the rioting and looting that has been taking place in cities throughout the U.S., Slatkin said, “It is the result of 30, if not 400 years of pent-up rage by people in this country who have never been treated as equal citizens. There appears to be people from the right who are infiltrating the protests whose intent is to make matters much worse.”

Sarah Chase had personal reasons for attending the demonstration.

"My two nephews whose pictures are on this sign and who are black and live in North Carolina, have experienced racial discrepancies. This will continue until white people stand up. We need to use white privilege for the right reasons.”

Sisters Maeve and Zoe Brammer, ages 19 and 21, who the previous night had attended a rally in Burlington, Vermont, were among the younger demonstrators.

“The track record of the police in this country is totally unacceptable, and there will only be justice when white people stand up,” implored Maeve.

Zoe added, “It’s really important that we understand that racism is exasperated in the context of COVID-19.”

She said she felt that blacks, due to racial inequalities, have had a higher incidence of contracting the disease as well as a mortality rate.

Nell Irwin Painter, author of the History of White People, which explores the idea of whiteness, said, “I’m here at Spruce Hill protesting against police brutality, which has been taking black lives for decades."

"This time, after coronavirus and the president’s incitement, it’s been one right after the other, captured in graphic, heartbreaking videos that no one can deny. Sometimes I feel like we’ve been thrown back into the mid-1960s, and I worry about electing Richard Nixon all over again, only as re-electing Trump.

"But then I see that my white neighbors are conscious of what’s been happening to black people and pushing back against injustice. Maybe this time will be different. I hope so.”

Another rally is scheduled for Tuesday in Saranac Lake at Riverside Park from 5 p.m. to 7 p.m.