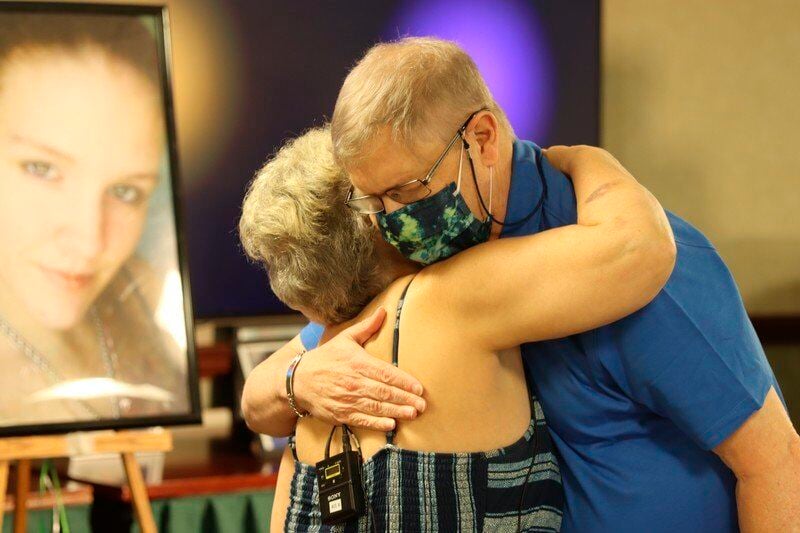 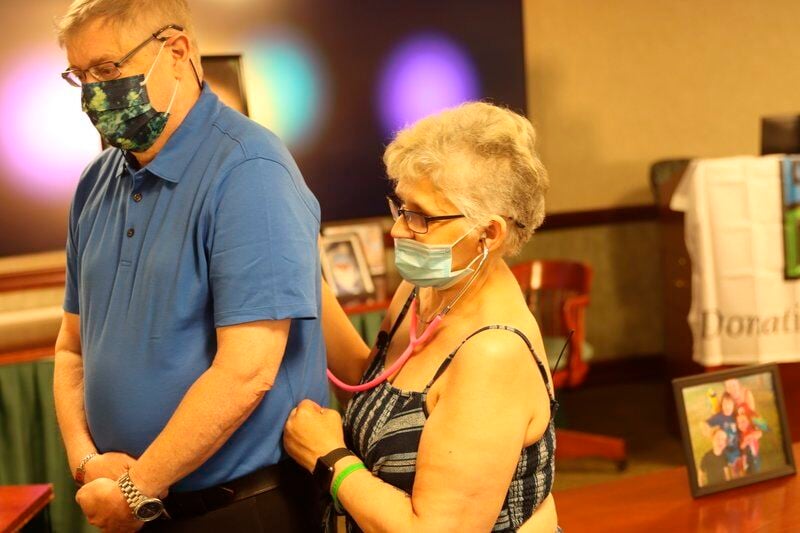 FERNANDO ALBA/Staff Photo Jodi Lynn Jeror hearing her daughter's lungs through a stethoscope at CVPH Saturday. Brian McMasters received Meghan Smith's lungs after she died in 2019. McMasters faced lung issues since the early '90s before then. 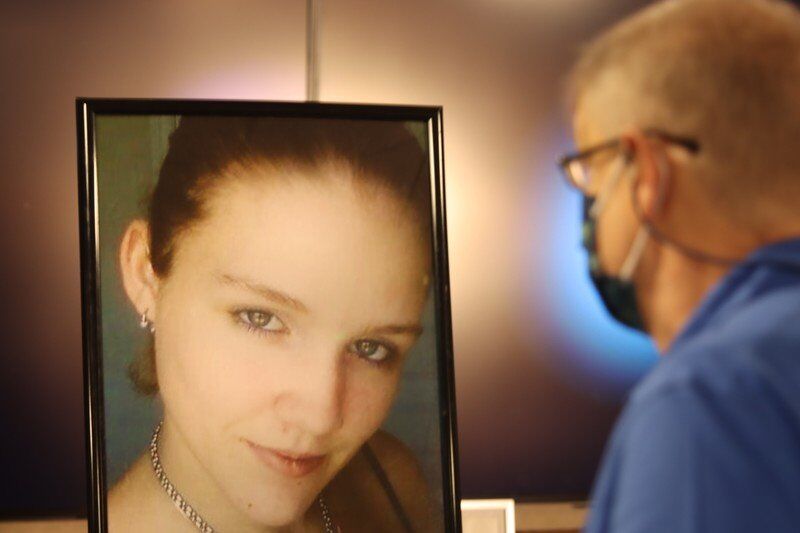 FERNANDO ALBA/Staff Photo Brian McMasters in front of a photo of Meghan Smith, whose lungs he received after she died in 2019, at CVPH Satuday. McMasters said he owes Smith his life after he faced a life-threatening condition stemming from lung issues.

FERNANDO ALBA/Staff Photo Jodi Lynn Jeror hearing her daughter's lungs through a stethoscope at CVPH Saturday. Brian McMasters received Meghan Smith's lungs after she died in 2019. McMasters faced lung issues since the early '90s before then.

FERNANDO ALBA/Staff Photo Brian McMasters in front of a photo of Meghan Smith, whose lungs he received after she died in 2019, at CVPH Satuday. McMasters said he owes Smith his life after he faced a life-threatening condition stemming from lung issues.

PLATTSBURGH — Jodi Lynn Jeror lost her daughter, Meghan Smith, to a sudden seizure in 2019. While Jeror grieved, Smith’s organs found a second life in someone else, giving the recipient a new lease on life.

Brian McMasters was hospitalized Jan. 17, 2019, with long-standing lung issues he had lived with since the early ‘90s. The same night he was taken to Brigham and Women’s Hospital in Boston, Smith was also hospitalized 250 miles away at CVPH.

'MY HEAD ON HER CHEST'

Earlier that night, Jeror said, Smith suffered a grand mal seizure that had thrown her from her bed after feeling sick all day.

“I got the call nobody wants to hear,” Jeror said. “It was her boyfriend at the time saying she’s not breathing, and her heart isn’t beating.”

Smith went on without oxygen for 15 minutes before being rushed to CVPH and being put on a respirator, Jeror said.

“For four days, I would lay my head on her chest,” she said. “The only noise I could hear was the respirator. It was like a nightmare. Every time I closed my eyes, it’s all I could hear.”

Smith later died in the hospital. But because she was an organ donor, her liver and two kidneys were donated and so were her lungs, which McMasters was given.

While Smith was still being cared for in CVPH, Jeror said she prayed she would get a chance to hear her daughter breathe again. Those prayers were answered, in a way, Saturday, when Jeror listened to Smith’s lungs breathe inside McMaster through a stethoscope at CVPH.

It was the first time the pair met in person, which McMasters said was rare.

“Only 10% of donors and donor families meet,” he said,

But the statistic Laura Fissette, of the Center for Donation and Transplant, was concerned about Saturday was the number of patients waiting on donations.

“New York has the third highest need in the country, but we have the least amount of registered donors,” she said.

Fissette said 9,000 New Yorkers are in need of a life-saving transplant, while only 41% of eligible people in the state are registered donors.

“Part of that is because until 2017, you could only register to be an organ donor at the DMV with a driver’s license,” Fissette said.

Linking organ registration exclusively to driver’s licenses, Fissette said, left out large groups of people who relied on mass transit in places like New York City and who didn’t need a license.

“That’s changing. You can register with a non-driver’s ID. They changed the age, too,” Fissette said,

“Now when you’re 16 and you’re getting your permit and going through that process, you can register to be an organ donor.”

Today’s registration totals in New York are a lot larger than it was prior to those changes, which was 23% among eligible people in 2016. But even still, Fissette said, a New Yorker dies every 22 hours waiting on an organ transplant.

“So we still have some work to do,” she said, noting that the national average of registered donors is 56%.

“Because unfortunately, when they’re faced with a situation, even if they’re a registered donor, the legal next kin is still who has to sign off on all the paperwork for you to become an organ donor,” she said.

So she said it’s important for registered donors to make their wishes known among family and friends.

Jeror, of Malone, said she and Smith, of Saranac Lake, both decided to become organ donors after Smith’s son, Brady, died in 2007.

And because of that, McMasters, of Braintree, Massachusetts, a retired Boston Police Department sergeant detective, has lived to see his grandson and granddaughter born and his two sons get married.

“Which I would not have seen had I not had the gift from Meghan,” McMasters said. “I owe her my life.”

McMasters was diagnosed in the early ‘90s with pulmonary sarcoidosis, a rare and debilitating inflammatory disease in his lungs, which affected their ability to circulate oxygen, making breathing difficult.

McMasters said life went on after his diagnosis, which worsened and even led to the life-threatening condition pulmonary hypertension. By the late 2010s, he said, McMasters was relying on the maximum amount of oxygen his tank would allow, 10 liters.

He said he was previously reluctant to pursue a transplant even after doctors recommended he look into one, saying he was concerned about the possible complications that could come with it.

But carrying around oxygen during work at the Boston Red Sox’s press box one day was the last straw for him, McMasters said. His condition had taken too much away from his day-to-day life.

Doctors told McMasters that people who need transplants the most are prioritized on the waiting list, so he would have to get worse before he got better. With each hospitalization afterward, his lung allocation score, a measure medical professionals use to prioritize lung transplant candidates, worsened until he reached 83.

He reached a score of 83 with the hospitalization on Jan. 17, 2019. He remembered waking up that night unable to breathe, even with his oxygen compressor. He used an emergency tank reserved for blackouts, but he still had trouble breathing, he said. McMasters said his score was the worst in the Northeast at the time.

Shortly after, McMasters underwent an overnight, nearly 12-hour operation for his double-lung transplant with Smith’s lungs, he said.

The next thing he remembers, McMasters said, he was waking up in the intensive care unit with a ventilator tube inserted.

“I guess it was a success,” he remembered thinking then.

Doctors had him walking laps around the ICU unit within 24 hours of the operation, he said.

McMasters said there are a myriad of restrictions that come with a transplant like his. They affect just about every part of his lifestyle, from his diet and how food is prepared to recreational activities, like not being able to garden. But he picks his battles. He wants to ride a motorcycle again, he said.

“The doctors are going to be mad at me, but I like to ride motorcycles. I was a motorcycle cop,” he said. “But as my wife said, ‘You got the transplant to live. And if you can’t do what you like, you can’t live.’”

Jeror and McMasters said they intend to keep in touch in the future. For Jeror, she said she’s gained another big brother in McMasters.