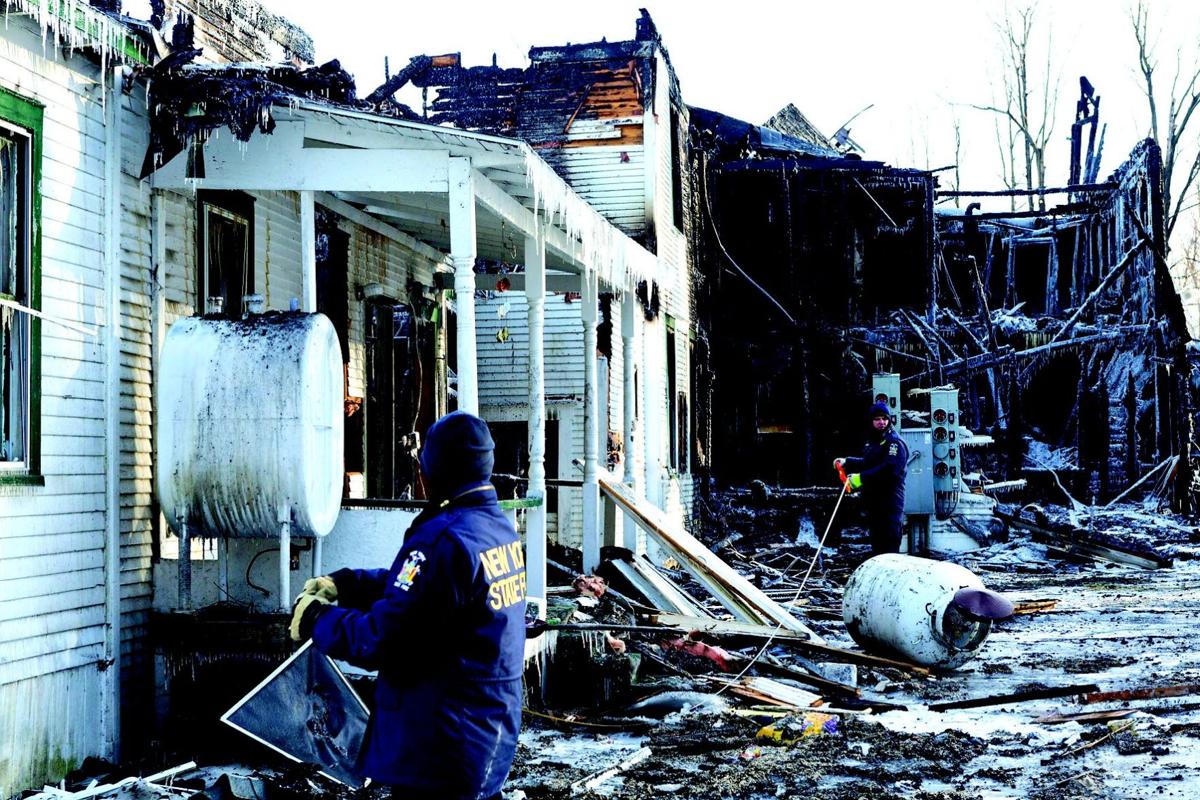 GABE DICKENS/P-R PHOTOs State fire investigators measure around the perimeter of the charred apartment building at 14 North St. in Port Kent on Friday afternoon. Pinpointing the cause of the Thursday night fire that destroyed it would be difficult, officials said, due to the immense damage. 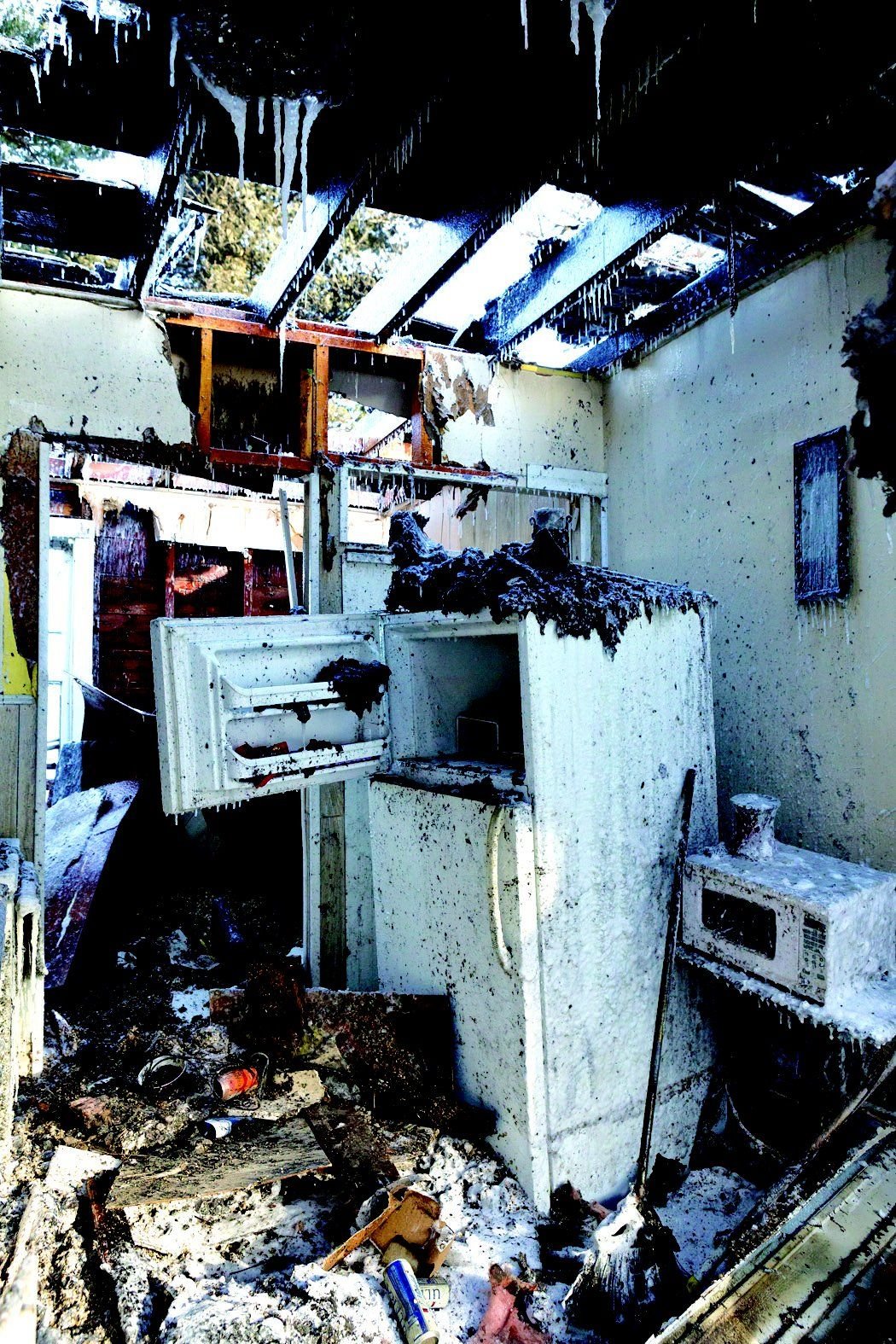 GABE DICKENS/P-R PHOTO A layer of soot and ice covers the kitchen of an apartment at 14 North St. in Port Kent that was destroyed by a fire Thursday night.

GABE DICKENS/P-R PHOTOs State fire investigators measure around the perimeter of the charred apartment building at 14 North St. in Port Kent on Friday afternoon. Pinpointing the cause of the Thursday night fire that destroyed it would be difficult, officials said, due to the immense damage.

GABE DICKENS/P-R PHOTO A layer of soot and ice covers the kitchen of an apartment at 14 North St. in Port Kent that was destroyed by a fire Thursday night.

PORT KENT — George Mudd and Angela Keech lost everything in the fire that destroyed their apartment building except an album of their children’s photos that firefighters saved.

Looking at the charred structure on Friday afternoon, Mudd said he felt “kind of broke” inside.

He, Angela, 3-year-old George and 10-month-old James are among 11 tenants whose apartments were destroyed in Thursday night’s conflagration.

“It’s such a big building, and there’s so much collapsed in the back that it’s going to be hard to determine the cause,” Keeseville Fire Chief David Perky explained.

They were soon joined by fire crews from AuSable Forks, Cadyville, Plattsburgh District 3, Willsboro, Lewis, Jay and South Plattsburgh, with the City of Plattsburgh on standby.

Heavy smoke was visible from the eaves of the wood-frame building at 9:40 p.m. when the first truck arrived at the two-story building, Perky said.

More than 75 firefighters worked in frigid temperatures to try to douse the blaze at the seven-unit building, which used to be a hotel, Perky said.

“This was probably one of the coldest (fires) we’ve dealt with,” he said, referring to his 16 years with the department. “Pretty much everything is a solid block of ice.”

Trees near the building were coated in ice Friday from the water that blew onto them.

The ground surrounding the structure was covered in several layers of ice, also a result of the water used to douse the flames.

Water from the hoses soaked the firefighters’ gear as they worked and then froze.

“Pretty much everybody’s gear looked like the front of that porch right there,” the chief said, indicating the ice-caked exterior of the building.

By mid Friday afternoon, his helmet, which had been sitting in a warm car for most of the day, still had traces of ice on it.

No one was injured, but several cats perished in the fire, Perky said.

Keeseville EMS and EMS 91 had responded with the fire companies.

“Whenever we have a major structure fire, we have an ambulance due to the nature of what we do,” Perky said. “We did have a couple guys fall down, and (they were) checked out just as a precaution.”

“Getting warm was the biggest thing.”

The rear and side of the building were the most heavily damaged, with virtually nothing left in parts.

One of the building’s owners, Anne Porter, said all but one single, retired person had family who were able to help them find a place to stay for the night.

The fire chief only knew of one tenant who has renter’s insurance, though maybe others have coverage.

Mudd and Keech, whose apartment was on the second floor on the side of the building that was most affected by the blaze, do not.

But Mudd said his relatives will help them replace some of the things they lost.

They were at his mother’s house on nearby Giddings Road when the fire broke out; Keech saw a Facebook post saying a building was burning on North Street.

“It was nothing but smoke” upon their arrival, she said. “You couldn’t even see the whole building.”

“It was just one big flame,” said Sally Mitchell, who lives up the street from the apartment building.

The explosion woke up her husband, who was sleeping when she heard news of the fire on her scanner.

Mitchell said her mother took in tenants Bob LeClair and his wife for the night.

Porter, who is in Florida, owns the property with Christine Killinger, was in Montreal when the fire erupted.

“It is devastating to my partner and me,” Porter said. “We can’t fathom it.

“We keep the building in good repair.”

It is insured, she said, but not to provide full replacement cost.

Volunteers from the North Country Chapter of the American Red Cross of Northeastern New York provided one adult with lodging, clothing and food on Thursday night, and they expected to help about 10 others on Friday.

“Due to the extreme cold weather, most residents left the fire scene quickly and could not be reached immediately,” the Red Cross said in a statement.

The last truck left the fire site at 3:30 a.m., but Keeseville Volunteer Fire Department wasn’t back in service until 6 a.m., Perky said.

That’s because firefighters had to thaw the pumps, hoses and their gear.

“I’d like to thank our Mutual Aid companies and everyone that came to help us,” the chief said.