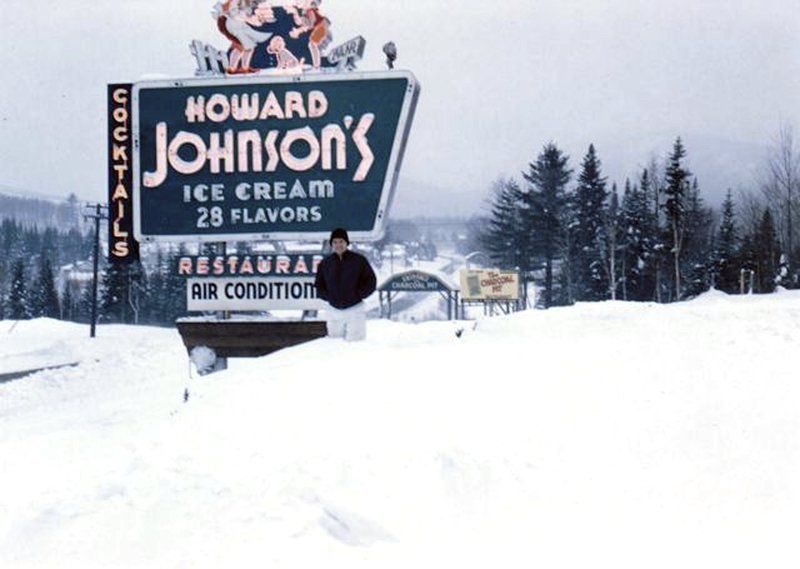 PHOTO/COURTESY BUTLER'S HOWARD JOHNSON'SDon Benjamin, a founding employee of the Howard Johnson's Restaurant in Lake Placid, poses by the sign during the winter of 1957-58. Ron and Jeannine Butler opened the restaurant that year, as chief cook and dishwashers. 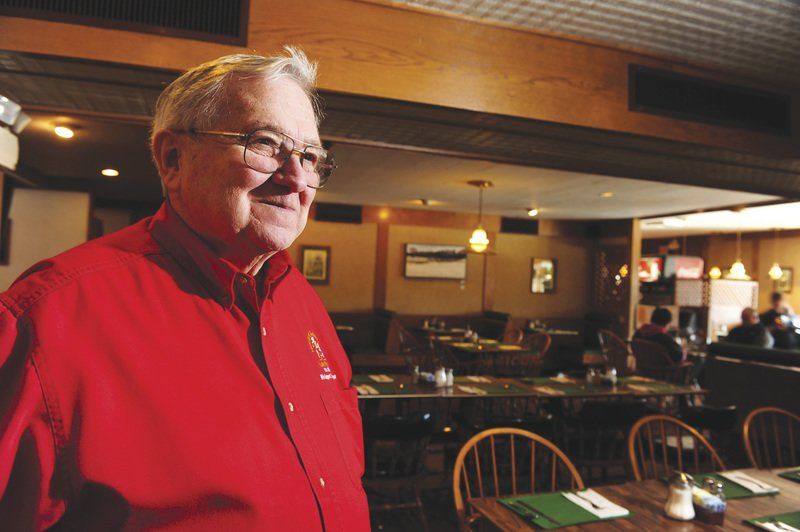 JACK LADUKE/P-R PHOTO With only a few days left before the Howard Johnson's Restaurant in Lake Placid is turned over to new owners, Ron Butler looks over the dining room of the eatery he and his wife, Jeannine, established some 58 years ago. The last day to dine at HoJo's is Tuesday, March 31.

PHOTO/COURTESY BUTLER'S HOWARD JOHNSON'SDon Benjamin, a founding employee of the Howard Johnson's Restaurant in Lake Placid, poses by the sign during the winter of 1957-58. Ron and Jeannine Butler opened the restaurant that year, as chief cook and dishwashers.

JACK LADUKE/P-R PHOTO With only a few days left before the Howard Johnson's Restaurant in Lake Placid is turned over to new owners, Ron Butler looks over the dining room of the eatery he and his wife, Jeannine, established some 58 years ago. The last day to dine at HoJo's is Tuesday, March 31.

LAKE PLACID — The Lake Placid Howard Johnson's Restaurant held its brand, name and orange roof longer than some 1,000 others.

Come March 30, it will change hands.

The friendly sign, with a chef handing a pie to a young lad and his dog, will eventually come down.

And one of the two last Howard Johnson’s restaurants anywhere will begin a slow fade into memory.

Mike Butler has been running the place that his father, Ron Butler, founded some 58 years ago.

The Butlers are selling the property to local restaurant Simply Gourmet, which is owned by Holly and Mickey Healy and Holly’s daughter Phoebe Burns.

“We are very happy it’s going to a local business,” Butler said on Tuesday.

“Holly Healy and Phoebe Burns are fantastic people and good operators. They’re going to keep it special here. Their plan is awesome.”

Butler said Lake Placid’s HoJo’s has had a good long run — one that withstood a move to separate the famed Howard Johnson's restaurant from its hotel brand and then closed the company's ice-cream production end.

The first Howard Johnson’s locations were built in Massachusetts in 1929. More than 1,000 of the franchised eateries existed by 1975.

The formula for the ice cream is owned now by Wyndham Worldwide, Butler said

“It was the best ice cream, had the highest butterfat count,” he said. “But nobody under 40 knows Howard Johnson’s anymore.”

So hitching up the historic orange-roofed reins and handing keys to the shop over to another local and well-known restaurateur is proving bittersweet, not unlike the uneven bits of chocolate that were buried in HoJo’s chocolate chip ice cream.

“There’s a little melancholy there, but it’s a good thing,” Butler said on Tuesday.

“Simply Gourmet and the ‘Dack Shack are going to be great.”

Yes, not only is Simply Gourmet moving a couple of Saranac Avenue blocks closer to the center of the village, it is adding a second restaurant.

“So we will have meatloaf and mashed potatoes.”

"Burgers will be a mainstay,” Burns said in a release.

Facing the existing building, the ‘Dack Shack will be on the right side.

Simply Gourmet, its deli and catering function rooms will be on the left.

A full coffee bar will include espresso drinks, and a drive-up window is planned for the future.

The Healys plan to redecorate the interior, but the counter and stools will stay the same.

“That is going to be our new bar,” Mrs. Healy said.

“We are renaming the back dining room The Butler Room in honor of the Butler family that founded HoJo’s here.”

The Butlers will continue to own and run the Comfort Inn on the hillside just behind the restaurant.

Mrs. Healy was meeting with the architects and designers on Tuesday.

“We’re transitioning. The only thing we’re keeping on the (HoJo’s) menu is the clam roll. They are teaching us how to make that,” she said.

“There is an official HoJo’s fried-clam station that Howard Johnson’s Co. designed, and we will be learning how to do that.

“We’re going to save a little piece of the orange roof. We’re working with an architect to save it as long as we can,” she said.

The Butlers had joined forces with Franchise Associates Inc. in 1986 after Howard Johnson's owners at Marriott cut restaurants loose from their brand.

Marriott transferred rights for HoJo’s owners to continue to operate with historic provenance.

But if they ever ceased to exist, all the naming rights and the formula for ice cream would go with them, Butler explained.

“They told us you could keep using the same name until you sell or close.”

Through the ensuing decades, doors under the orange-topped roofs closed, one at a time, including the location in Springfield, Vt., in 2005, and the HoJo’s in Lake George in 2010.

That left only two standing: one in Bangor, Maine, and this one, in Lake Placid, which still has the signature orange roof.

There were two Howard Johnson's in Plattsburgh during the heyday of the franchise.

The one on Route 9 near Cumberland Head Corners, where a Stewart's Shop sits now, opened in 1956 and closed in the mid 1970s, according to Bob Smith, president of 9 Platt Hospitality Group.

The other, located on Route 3, included a Howard Johnson's Motor Court motel. That one, at the site of the present 99 Restaurant & Pub and Platt Hospitality's Best Western Inn at Smithfield, shut down in October 1998.

"When I decided to close my HoJo's and call it Lindseys, I told Ronnie (Butler), OK, you win. You can be the last Howard Johnson on the planet," Smith said.

Simply Gourmet and the ‘Dack Shack will open in their new digs on May 1.

Menus for each restaurant are completely different, she said.

And combined, they will provide 20 to 40 jobs; more in summertime.

“That includes 10 to 12 new jobs,” Mrs. Healy said. “We hope to retain a number of HoJo employees and continue to host service clubs such as Rotary and Kiwanis."

For the Butlers, the last days of handling those thick porcelain dishes, wiping down tables, setting out breakfast buffet eggs, sausage and French toast are poignant.

“What we as a family would like to do is to thank all the people who have worked for us and all the locals and visitors we’ve served over the last 58 years,” Butler said.

“We couldn’t have done any of this without you.”

“Ron Butler and his family have spent many years building an institution here in town, and we want to try very hard to preserve a portion of those efforts," Mrs. Healy said.