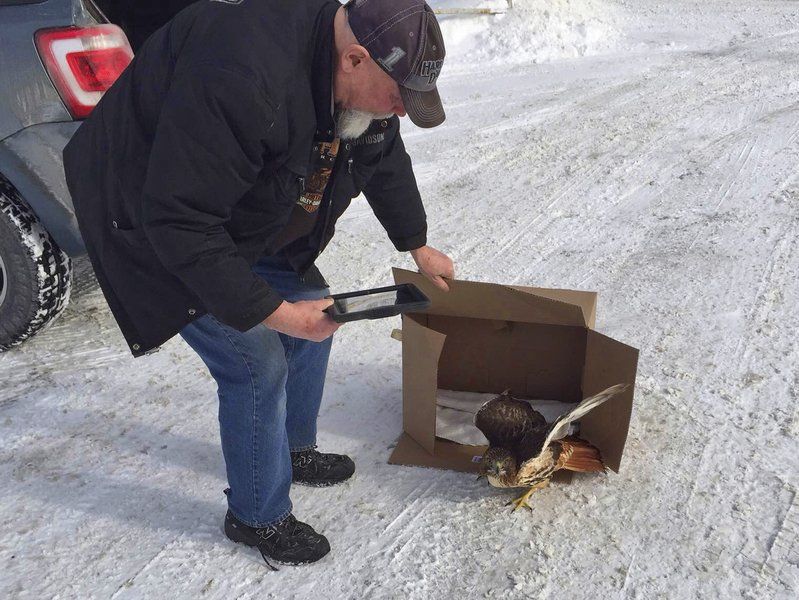 Wayne Berry opens the box used to transport Lucky, a red-tailed hawk, to Fair Haven, Vt., for release back into the wild. Berry accidentally struck the bird with his truck while traveling through Fair Haven in January and brought the bird to the Vermont Institute of Natural Science for treatment. 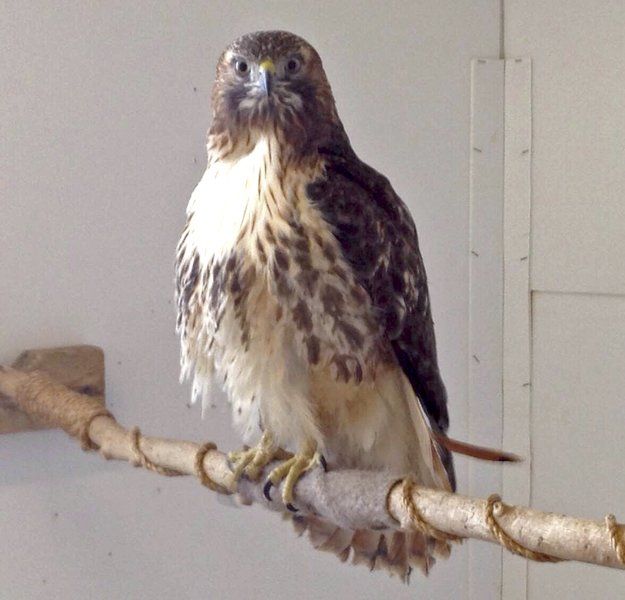 Lucky, a red-tailed hawk, sits on a perch at the Vermont Institute of Natural Science.

Wayne Berry opens the box used to transport Lucky, a red-tailed hawk, to Fair Haven, Vt., for release back into the wild. Berry accidentally struck the bird with his truck while traveling through Fair Haven in January and brought the bird to the Vermont Institute of Natural Science for treatment.

Lucky, a red-tailed hawk, sits on a perch at the Vermont Institute of Natural Science.

PLATTSBURGH — Wayne Berry was sure the bird was dead.

The Plattsburgh man was driving with his girlfriend, Jackie Hall, and friend Randy Coty through Fair Haven, Vt., on Jan. 10 when a red-tailed hawk flew across the road in front of him.

“I saw this hawk swoop down, grab the mouse that was on the side of the road and go right into my grill,” he said.

The bird was thrown into the windshield and rolled over the top of the truck.

Though fearing the worst, Berry went back to check on it.

But while gazing down at the battered bird, Berry saw one of its eyes open.

“If he didn’t open that one eye, I would have put him for dead,” he said.

Such was the force of the collision that the poor mouse ended up stuck in the grill of the truck.

Poking holes in a cardboard box he had in the back of his truck, Berry placed the bird inside and drove off to look for help.

A veterinarian in Fair Haven told him the nearest rehabilitation center that treats raptors was the Vermont Institute of Natural Science in Quechee.

According to its website, the nonprofit institute maintains centers for wildlife research, education and rehabilitation, with a variety of public programs and exhibits.

Its Avian Rehabilitation Program treats more than 400 injured and orphaned birds a year from Vermont and New Hampshire.

Berry called the center and explained the situation to lead wildlife keeper Calah Beckwith, who told him to bring the bird in.

“They shook their heads and said, 'He’s in pretty bad shape,'” Berry said, recalling the tears in his eyes and how shaken he had been from the experience.

The staff thanked him and told him to call back in a few days to see how the bird was doing.

Considering the extent of the hawk's injuries, Berry almost didn't call — but he was sure glad he did.

He was relieved to hear that the bird, whom he had named Lucky, was recovering well.

Beckwith said the hawk was quickly diagnosed with the common injuries of a car collision: bleeding in its mouth, sinus cavity and lungs.

“The most traumatic injury he had was a fracture” of a bone in his leg, she said.

But she explained that birds possess a fast metabolism that promotes rapid cell replacement and allows bones to heal quickly when properly set with a splint.

“What would take us several months to heal from, they can heal in just a matter of a few days or weeks,” she said.

The bleeding was treated with homeopathic medicines to be gentle on the bird's system, she said.

Thinking his part in Lucky’s recovery was complete, Berry was surprised when the staff asked him if he would like to release the bird himself.

On Feb. 10, exactly one month after making the trip to the center, Berry took Lucky back to Fair Haven, though off from the roadway, and set him loose.

“He took off like a champ, and away he went,” he said. “It was just a touching thing to see him go.”

Along with the satisfaction of having helped save the animal's life, Berry left the institute with some advice to share: Don't throw food out the window while driving.

It attracts small animals such as mice, he explained, which attract larger predators to wander near the roadways.

Educating the public on ways to assist animals and minimize disruption to their environment is an important mission for rehabilitation centers, Beckwith said.

And informing and empowering people like Berry to know what to do when encountering an injured animal can make sure there are plenty of Luckys left flying around.

“Accidents can happen, and when they do, there's something you can do about it,” Beckwith said.

What to do if you hit an animal

• Watch for wildlife in and near the road at dawn, dusk and in the first few hours after darkness. Keep in mind that where there is one animal, there are probably others.

• Do not put your own safety at risk. Unless you can move the animal from the road in absolute safety, do not attempt to do so.

• Never attempt to handle a large animal like a deer, or one that could give a serious bite, like a raccoon.

• When you need assistance, call the non-emergency number of the local police department and describe the animal's location.

• Use heavy gloves or a towel to protect yourself or avoid directly handling the animal if you try to rescue it yourself.

• If you accidentally kill an animal, try to move the animal off the road — but only if you can do so in complete safety. Otherwise, report the location of the animal's body to the local police department and it will arrange for removal.

Source: The Humane Society of the United States

Visit www.vinsweb.org for more information about the Vermont Institute of Natural Science.

Ben Rowe is a staff writer, photographer and page designer. As a lifelong Adirondack resident, he enjoys the opportunity to share the stories and images of the North Country.