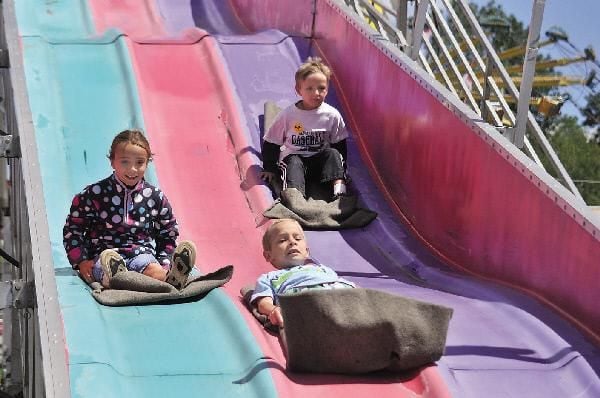 Alyson St. Mary, 9; Trent St. Mary, 7; and Aiden St. Mary, 6, of Boston get their thrills on the giant slide at the fair in Malone Saturday afternoon. 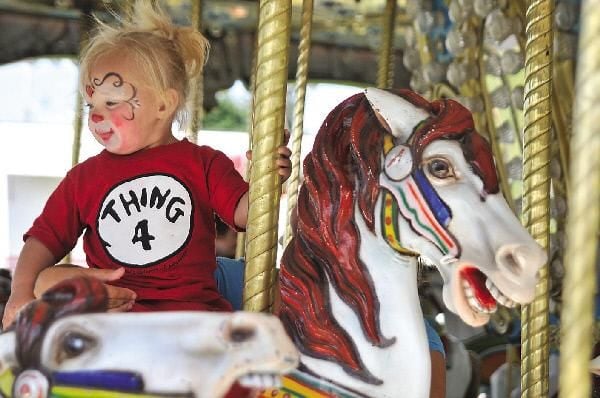 Cearra Jade Eseltine, dressed as a Dr. Suess character from the book "The Cat in the Hat," gives a smile to family as she rides the carousel at the Franklin County Fair Saturday afternoon.

Alyson St. Mary, 9; Trent St. Mary, 7; and Aiden St. Mary, 6, of Boston get their thrills on the giant slide at the fair in Malone Saturday afternoon.

Cearra Jade Eseltine, dressed as a Dr. Suess character from the book "The Cat in the Hat," gives a smile to family as she rides the carousel at the Franklin County Fair Saturday afternoon.

MALONE -- At just 13 months old, Landon Miller seemed to know there was something special about the Franklin County Fair.

"He's so excited," the tyke's mom, Shauna Miller, said Saturday as she walked through the poultry barn at the 160th Agricultural Society event.

Seated in a stroller, Landon's excitement was seemingly hard to contain as he took in all the sights and sounds of the attraction's opening day during his first fair outing.

"He's just loving everything. He loved the goats and really took to them. And he had a lot of fun in the corn box," Mrs. Miller said as she laughed and brushed corn dust from her pants.

"He's having a great time."

The Champlain family was just one of many who turned out to see what's in store for this year's festivities, and as always the agricultural barns were a big hit.

"I really like the animals, especially the rabbits, and they have a lot this year," Brushton resident Stephanie Brannan said Saturday morning as she walked through the show exhibits.

"We come out every year for it."

For Trishia Almond, it wasn't just to see the other prized animals there but to show her favorite horse, Ginger, for a second time.

"I just really like riding and coming out to have fun," the 20-year-old rider from Bangor said as she took a moment to rest from all the morning shows and 4-H activities.

Her parents are beef farmers but joined Trishia for the first few days of competition as they wait for their cattle to roll into the fair later this week.

"She just wanted to get into the horses," Lisa Almond said.

Nearby, Matt Artus walked away with a beaming smile after winning seven blue ribbons in the poultry shows.

"It's his first time and he's really happy," the 13-year-old's grandfather said as he loaded the St. Regis Falls teen's prized birds into a truck.

A steady crowd moved through the many barns and exhibits, taking in all the usual attractions of the event, which seemed to live up to its theme of Rediscovering Our Agricultural Roots.

There were informational booths and exhibits on everything from the history of the American Flag to wind power and spout collections.

Even some of the dining options, such as Farmer's Kitchen of Bombay, lived up to the highly publicized theme.

But it wasn't just the agriculture that drew in a large crowd -- the packed midway of rides, games and food was a big hit, too.

"I like the (dizzy) dragon ride," 6-year-old Shannah Cook-Chevier said as she circled in excitement, waiting to hop on the next ride with her siblings.

The kids' grandparents, Jeanne and Sam Cook, made the trip from Oswego to take their family to the fun-filled event.

"I called a couple weeks ago and made a date with my granddaughter," Sam joked as he walked the midway with his grandkids from Brushton.

Jackie Rowe of Malone decided to spend her day the same way, enjoying the fair with her 2-year-old grandson, Harlan Rowe.

"He just has so much fun, and he really loves the animals," Rowe said as she pulled the boy in a wagon.

"We do this every year and it's the highlight of our year."

The fair continues through next weekend.

Judy D. Fisher, 76, of Turner Road, Morrisonville, died on June 10, 2021, at CVPH Medical Center. She was born in Plattsburgh on Dec. 31, 1944. At Judy's request there will be no services. Arrangements are by Brown Funeral Home.

PLATTSBURGH [mdash] Anthony Tarricone, 94, of Plattsburgh, passed away Monday in his home with his loving wife by his side and under the care of hospice. He was born in Yonkers on Aug. 13, 1926, the son of George and Nancy Tarricone. He graduated Horton High School in Yonkers. He also gradua…

, 63, of Colorado, passed away May 5, 2021. A Graveside service will be held Monday, June 14, 2021 at 1:30pm at the West Plattsburgh Union Cemetery. Arrangements have been entrusted to the R.W. Walker Funeral Home, 69 Court Street, Plattsburgh, NY.