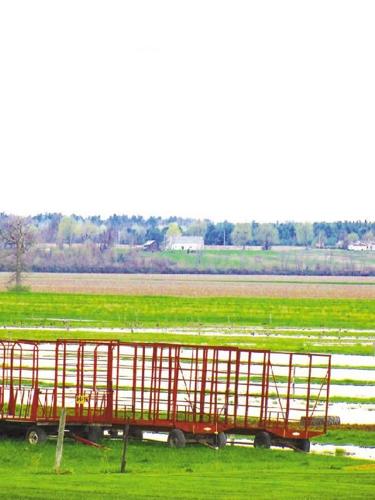 Miner Institute Research Agronomist Eric Young and Research Technician Laura Klaiber (above) look over the flooded fields at the Chazy research facility. Rainfall has been 6.16 inches above normal during this growing season in the North Country, according to the U.S. Department of Agriculture. Problems have been especially severe along Lake Champlain and near swollen rivers and streams, but the damage is widespread. 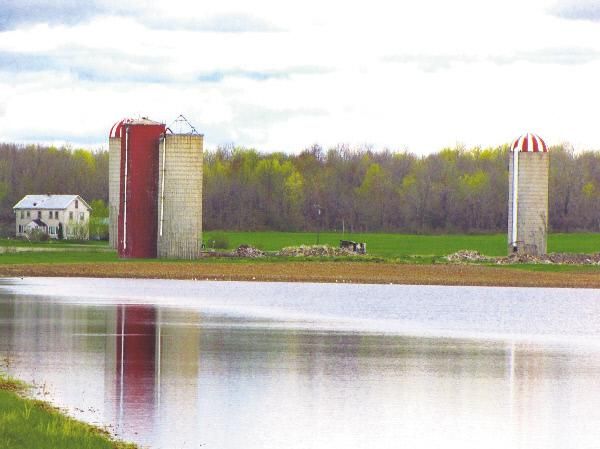 Flooded fields along Lakeshore Road in Chazy have prevented planting of any kind. The lake level will have to recede significantly to get a crop in this year. 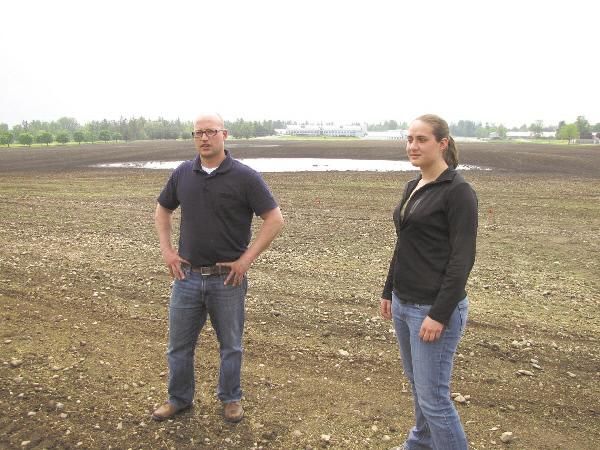 Miner Institute Research Agronomist Eric Young and Research Technician Laura Klaiber (above) look over the flooded fields at the Chazy research facility. Rainfall has been 6.16 inches above normal during this growing season in the North Country, according to the U.S. Department of Agriculture. Problems have been especially severe along Lake Champlain and near swollen rivers and streams, but the damage is widespread.

Flooded fields along Lakeshore Road in Chazy have prevented planting of any kind. The lake level will have to recede significantly to get a crop in this year.

North Country farmers are working desperately to get their crops in the ground during a spring of unprecedented rainfall and flooding, a task made especially important due to soaring feed-grain prices.

"We got done planting corn last night, but there are 300 acres we can't plant," said Dutch Rovers of Rovers Dairy LLC and Rovers Farm Inc. on Thursday. "That's still under Lake Champlain."

The fields along Lakeshore Road, as well as others near the lake and those near swollen North Country rivers and streams, have taken the brunt of the flooding. But problems created by rain-soaked soil are widespread.

The Chazy dairyman said the farm usually plants about 1,200 acres of corn to use as dairy-cow feed. If the lake recedes and the rest can be done before June 1, the corn can be used for grain, the preferred, high-quality feed made up of just the corn kernels.

If it's after that but before June 15, it can still be planted with corn, but the crop will have to be used for the less-nutritious silage, in which the whole plant is chopped up.

In addition, Rovers said, despite the farm being completely equipped with underground tile drainage, a lot of his hay has been drowned. The tile lines are 50 feet apart, and right over the pipes the crop is usable, but between the rows it's turning yellow due to too much water.

"In the 43 years I've farmed, it's the wettest I've seen it," Rovers said. "It's also the highest I've seen Lake Champlain. I hope I never see it again."

He said they're not going to cut the hay, and there are still 800 acres of soybeans to be planted, which he was working on but had to stop Thursday due to more rain.

"Beans are good until probably the 15th of June," he said.

The reason it's so important for farmers to get their feed crops in the ground is that the situation is the same across much of the eastern and central United States, Rovers said. When you have to blow up levees and flood vast areas of farmland to save cities along the Mississippi River, supply and demand dictates grain prices are bound to be high. This puts everyone in a pinch, both farmers and consumers.

"People have to think about having enough food in this country, or they'll be short forever," Rovers said, adding that farm acreage is being squeezed while the population continues to increase.

In Ohio, he said, only nine percent of the corn crop has been planted, and the usual target date is April 15.

Rovers said that because the market is controlled by commodity traders — the same game that's played in the oil market — prices are set artificially. Just the fear that a crop will be bad in the fall drives up prices today.

"It's more controlled by the speculators than everyone else," Rovers said, adding that if there's a bad announcement in the news, "the next day corn goes up 50 or 60 cents a bushel."

In many areas, Rovers said, farmers sell 30 percent of their crop on the futures market before they ever plant it to guarantee a price, and farmers don't make any extra money as a result of the artificial price spikes.

Peter Hagar, agriculture educator for the Clinton County Cooperative Extension, said the problems are widespread throughout the area.

"It's wet out there, and it has definitely affected farmers in their corn planting," he said, adding that the wetter it stays the worse it looks for hay and silage as well.

"I've only seen one farmer mowing hay so far," he said.

The May 20 target date he recommends for corn planting has been largely missed, he said.

"Temperature-wise it's been OK, but we've had excessive rain and some of the fields have been totally saturated."

Tractors can't get out to do their work.

For seeds to germinate, the soil temperature has to be about 50 degrees, and if it's too wet, it doesn't warm up as fast.

During the week of May 9-13, conditions improved, but the next week the skies opened up again. Even if farmers were able to get seed planted then, it's not good for it to rain too heavily right afterwards, especially if the ground is saturated and there's pooling in the fields.

Also, cattle in the pastures tend to puncture the wet ground with their hooves, leaving pockmarked fields that should be nice and smooth.

Hagar said orchardists haven't been immune either, with apple scab that requires more fungicide and tractor ruts being a problem when things get soggy.

Hagar also cited the price of corn as a reason a good growing season is so important.

"This year, farmers planned to plant a lot more corn," he said. "The price of corn and soybeans are at record highs."

A low yield could have a detrimental economic impact locally. If farmers are unable to plant by June 10, they're going to be way behind.

Tile drainage installed under fields by many farmers has helped, Hagar said, but even those systems have been overwhelmed.

"Most of the fields up along the lake, all those big farms, the first thing they do is get in and tile it," he said.

But this year, the pipes are below the water table in some cases.

"It's good to have, but there's no place for the water to go."

At the William H. Miner Agricultural Research Institute in Chazy, Research Agronomist Eric Young said the Northeast has had 200 percent over normal precipitation from March through the present.

"That's just put us behind by three weeks," he said.

Normally, alfalfa and grass seedlings are planted in April. That plan had to be abandoned at Miner, and it won't be resumed until August.

"This year, we started May 12 and only got a little bit in and then the rain started again," he said. They restarted this past week before the skies opened up again.

"The long and the short of it is everyone is behind because of the excess water," he said. "You really can't plant in saturated ground."

The next dilemma farmers will face is that hay will be ready, Young said, but corn will still need to be planted and growers will have to decide what to do. Getting hay in late reduces quality and can affect milk production.

Also, he said, when you get past May 25 with corn, the yield potential really drops off. "That's one big issue," Young said. "The other is trying to get corn ripened and dry enough to chop."

Because of this, a wet, cool summer and fall could make the problems even worse.

Young said the critical time is fast approaching. "Most guys are planting hybrids of 100 days or less (to maturity), some 105," he said, adding that Miner has purchased a 99-day corn hybrid and now is thinking of exchanging it for 85-day seed.

"The problem is if everyone wants to do it at the same time, it could be a supply issue," he said.

Miner currently has about 80 acres of corn planted out of 300. Even with seeds treated with fungicides, there's still a risk of fungal disease and blight if things don't dry out quickly.

Hagar said that, for this growing season, rainfall has been 6.16 inches over normal, a tremendous amount of water for the land to absorb.

"It was crazy how much extra rain we had," he said. "Hopefully, things will recover and dry out and get warm, but looking at the weather forecast it's hard to be encouraging."

Do you vote in midterm elections?