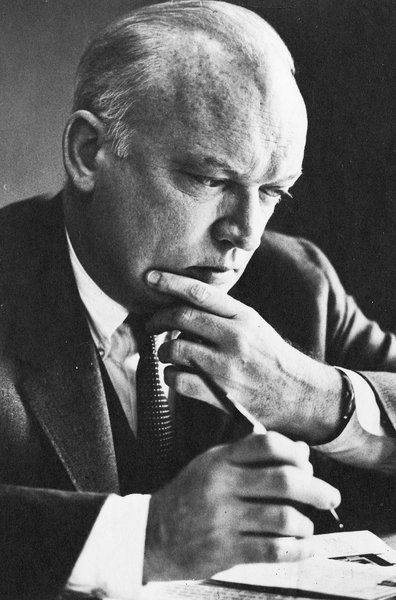 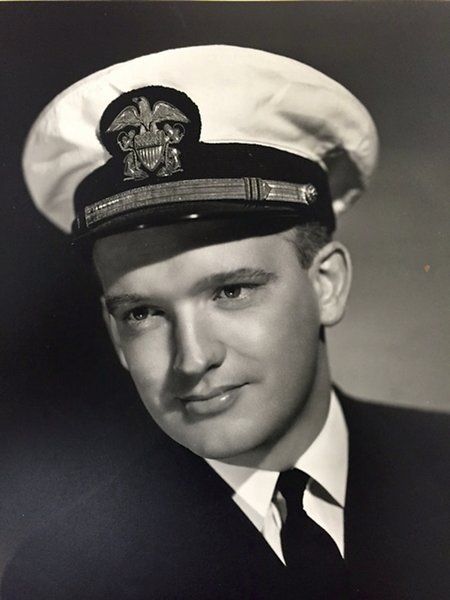 James Donovan, shown in uniform, arranged in his later years as an attorney for the release of downed U-2 pilot Francis Gary Powers. 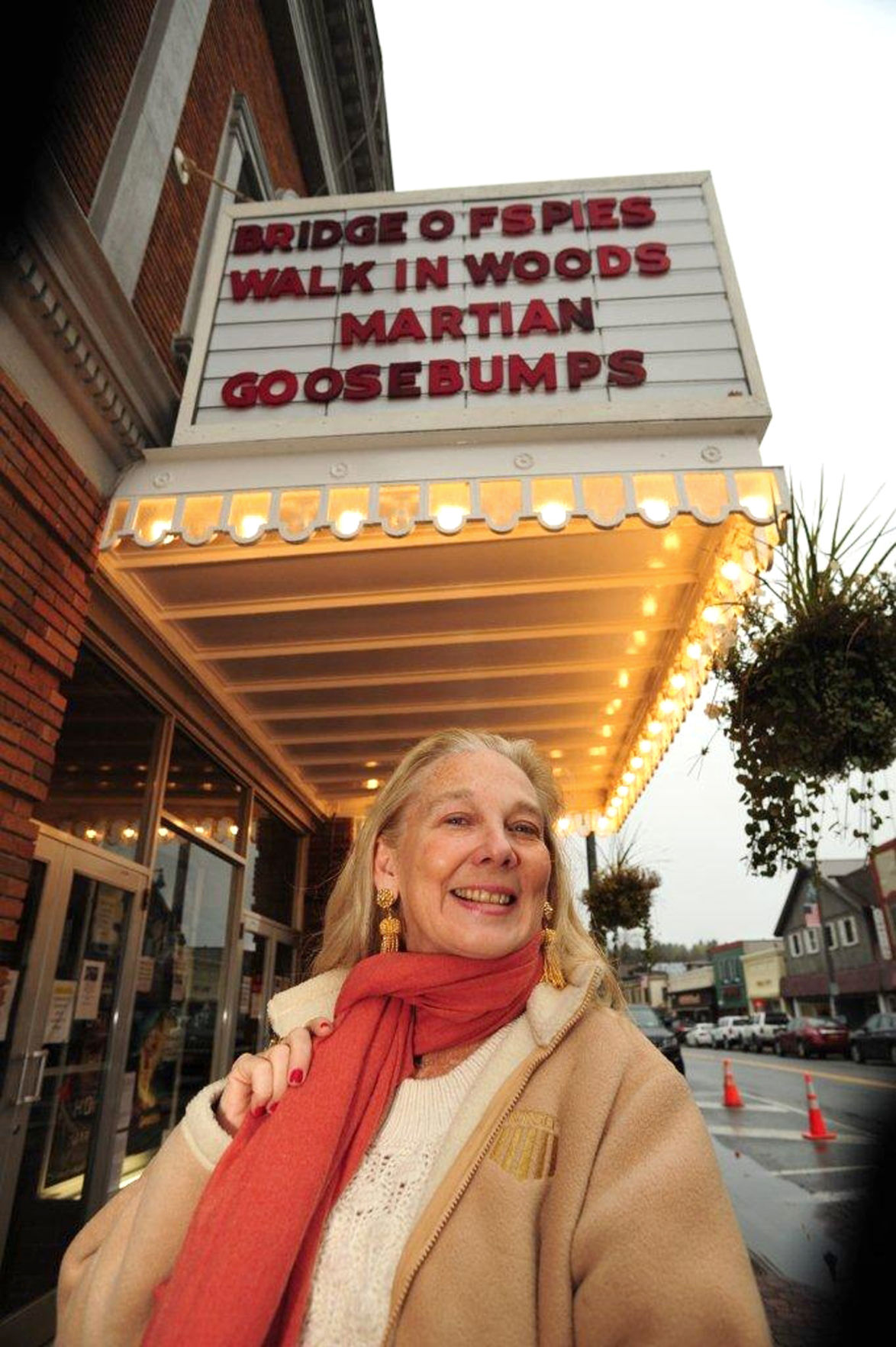 Beth Amorosi, granddaughter of attorney James Donovan, stands under the Palace Theatre marquee in Lake Placid that shows the movie "Bridge of Spies." It tells the story of the work her grandfather did at the request of President John Kennedy during the Cold War.

James Donovan, shown in uniform, arranged in his later years as an attorney for the release of downed U-2 pilot Francis Gary Powers.

Beth Amorosi, granddaughter of attorney James Donovan, stands under the Palace Theatre marquee in Lake Placid that shows the movie "Bridge of Spies." It tells the story of the work her grandfather did at the request of President John Kennedy during the Cold War.

LAKE PLACID — The Glienicke Bridge in Berlin, Germany, is 3,788 miles and an ocean away from Lake Placid.

But James "Jim" B. Donovan, who negotiated the famed Cold War exchange of spies on a wet, foggy night there, often called the Olympic Village home.

His final resting place is at St. Agnes Cemetery in Lake Placid, alongside his wife, Mary.

“Bridge of Spies,” Steven Spielberg's tense spy thriller, tells the story of Jim Donovan, an assistant prosecutor at the Nuremberg Trials and general counsel for the Office of Strategic Services, the agency that later became the CIA.

But Donovan described the events in his own words some 50 years ago. That book, "Strangers on a Bridge," was re-released by Scribner in August.

In his lifetime, Donovan worked not only to exchange top Russian spy Col. Rudolf Abel for CIA pilot Francis Gary Powers but also to swap some 9,700 Cubans and Americans from Cuba through the 1960s.

Throughout his focused effort to balance human life against uncertainty in the Cold War, Donovan sought quiet and reflection at his home in Lake Placid.

In an interview with the Press-Republican, his son, John, recalled their early years here.

“He started coming to Placid as a boy in the 1920s. It really was in his blood right from the beginning.

"He met my mother (Mary) in Lake Placid in the '30s. His father, who was a doctor, would come here.

"It was a place he (Jim) loved both summer and winter. He loved going to things like the ski jumping event on New Year's Day, walking on Mirror Lake in the winter,” said John, who graduated from Northwoods School in 1963.

John remembered traveling one school spring break with his father to Cuba shortly after the Bay of Pigs and the failed U.S. attempt to overthrow Fidel Castro.

“One of his repeated adventures was to go down to Cuba. He made over a dozen trips and came back with a great many prisoners,” John said.

“In April 1963, he took me down there. We traveled by car across Cuba with Castro and went to the Bay of Pigs itself and came back with 35 prisoners.”

Jim had planned to give Castro a wetsuit as a gift, John recalled.

Many historical accounts tell how the CIA also hatched a plot to poison a wetsuit and somehow get it to Castro.

But Donovan wasn’t taking any part in the covert plan.

“He suspected a conspiracy afoot, so he bought his own,” John said.

Castro donned the suit and went out for a swim then and there, in the Bay of Pigs.

“They (CIA) had a number of plots like that; some sounded like they were out of the Spy vs. Spy section of Mad Magazine.”

Jim, played by Tom Hanks in "Bridge of Spies," was a central figure in negotiating the release of American troops captured in the failed attack on Cuba.

His innate ability to communicate held sway even as the former Soviet Union and U.S. President John Kennedy and his military leaders reached the very brink of nuclear war.

“It was the summer of 1962 when the negotiations began. It went right through the Missile Crisis,” John said.

“He was running for Senate at the same time. But he spent most of his time in Cuba.”

That principled approach to negotiation, delivered on human terms, drew from Jim Donovan’s demeanor, one that connected deeply with the people and the peace in Lake Placid, his son says.

“I remember, for us as children, to come out of the city at Christmastime and open the sleeper-train window to winter wonderland as we headed to Lake Placid was a magical experience,” John said.

“I think there is a vision of an ideal up there. It’s important to have that understanding of an ideal — the thing to be attained.”

That same ideal factors intricately in Spielberg's telling. And the Donovan family provided background and context for the filmmaker.

“We met with Spielberg for a private luncheon," John said. "He called the movie a ‘character thriller.’

"If you think about the Olympics and the  Olympic ideal, I think it connects with the idea of character, of people striving for the highest possible achievement.

“The tension at the end of the movie comes from the pressure between getting a satisfactory conclusion versus the best possible conclusion. You know, go for a gold. That was always my father's philosophy.”

Asked if he thinks Tom Hanks provides a good character actor for his father, John said he does.

“He’s so highly respected. He did a good job coming across, for instance, speaking at the Supreme Court.”

Jim’s granddaughter Beth Amorosi, John's niece, negotiated with the publishing companies to have Jim's own memoir of the story reissued this summer.

"The family has been very taken by the acclaim and the film itself," Amorosi said.

“It’s all so extremely surreal. The tribute to my grandfather is totally beyond the pale.

"What’s been very special — I’ve seen the movie now eight times — is just having the experience to see it so many times and hear the audience reaction. Everybody claps at the end.”

Amorosi was in Lake Placid recently for a special release of the film at Palace Theater. It was a celebration of the community that offered her family respite and relief.

“Lake Placid figures to be such a special place in our family. He (Jim) saw this place as one of serenity, peace and clarity of mind. He was a great lover of books, a collector of rare books,” Amorosi said.

“I think his ability to negotiate was superlative. One of the things that lent itself to that ability was that he looked at every person as another human being and appealed to their humanity. He was a very affable person.”

Originally published in 1964, "Strangers on a Bridge" reads like a “top-notch spy thriller” (Time Magazine) as it brings readers into the thick of Cold War law and order, Soviet spycraft and the CIA’s counter-strategies.

Drawing on his legal expertise and flair for storytelling, James Donovan recounts his appointment to defend Soviet Col. Rudolf Abel on charges of “conspiracy to commit military and atomic espionage” and eventually negotiate his exchange for the release of CIA pilot Francis Gary Powers, whose imprisonment had pushed tensions between the United States and Soviet Union to an all-time high.

Through Donovan’s memoir, the party lines of the Cold War are vividly and urgently drawn. The reissue includes bonus photographs and materials from Abel’s trial, along with a foreword from New York Times best-selling novelist and retired CIA agent Jason Matthews.