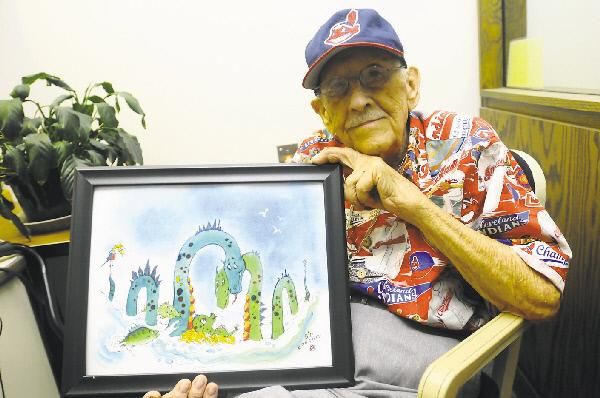 Sid Couchey, in a flamboyant Cleveland Indians shirt that only begins to express his passion for the baseball team from his childhood home, holds his most recent interpretation of the Lake Champlain sea monster, entitled "Champy's Birth." Sid, of Essex, died Sunday. 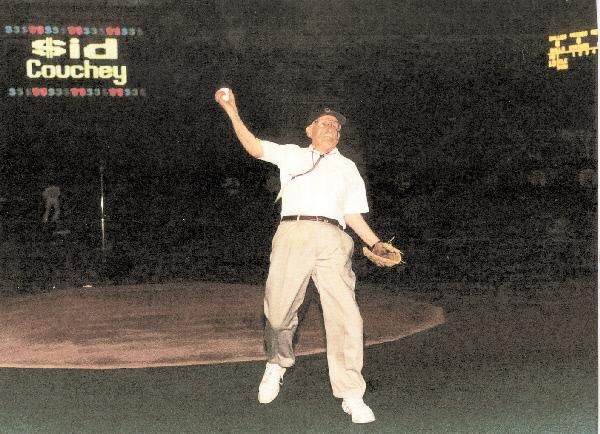 Sid Couchey serves up the first pitch at Olympic Stadium in Montreal before an Expos game against the Cleveland Indians in August 2002. He took great pains to read the catcher's signs, using binoculars, before hurling the ball.

Sid Couchey, in a flamboyant Cleveland Indians shirt that only begins to express his passion for the baseball team from his childhood home, holds his most recent interpretation of the Lake Champlain sea monster, entitled "Champy's Birth." Sid, of Essex, died Sunday.

Sid Couchey serves up the first pitch at Olympic Stadium in Montreal before an Expos game against the Cleveland Indians in August 2002. He took great pains to read the catcher's signs, using binoculars, before hurling the ball.

Sid Couchey got the sign a little more than two weeks ago.

Sid, 92, died Sunday in Inman, S.C., where he and his wife, Ruth, have wintered the past decade.

Their snowbird digs were the basement level of the home of their son, Brian, daughter-in-law, Suze, and their five children, Andrew, Benjamin, Abbi, Jimmy and Peter.

Sid was diagnosed with Burkitt's lymphoma on Leap Day, Feb. 29.

"It's an exceptionally rare cancer," Suze said. "Leave it to Dad to get something extraordinarily unique."

Sid was a true original.

The much loved Essex man was a cartoonist who drew such characters as Richie Rich, Little Dot and Little Lotta for Harvey Comics for many years.

Those familiar faces appeared in many of Couchey's own works over the decades. He also painted "Champy by the Masters," a series of images of the Lake Champlain monster in the styles of such artists as Picasso and Monet.

That collection found a home in a book that Sid collaborated on with his daughter, Laura Abate, to introduce schoolchildren to art.

Sid created a mascot for the 1980 Winter Olympics in Lake Placid.

He dreamed up the sister-cityhood of Essex with Harveyville, the virtual home of the cartoon greats he breathed life into for so many years.

He and another North Country icon, the late Arto Monaco of Land of Make Believe fame in Upper Jay, teamed up for the first and final time in 2003, to illustrate a comic book reviving the fame of Witherbee-born movie star Tom Tyler.

"Our North Country region was truly blessed to have Sid Couchey with us for so many years," said Calvin Castine of Champlain, who masterminded the Tom Tyler comic books.

"As was the case with our late buddy, Arto Monaco, you don't replace people like Sid Couchey," he said. "You're just thankful that he came along during your lifetime."

"I'm sure the first words Sid heard after closing his eyes for that final time were, 'Well done, my good and faithful servant.'"

If you knew Sid, you laughed a lot.

The word that best describes him, Castine said, is fun.

"I can't remember ever spending time with Sid and not having fun."

And now heaven, he said, "just got to be a little more fun."

"He was always willing to pull your leg," said Bruce Klink of Willsboro.

Klink helped Sid transport his artwork to several shows and is the proud recipient of the artist's largess, which includes depictions of Klink on a steam engine, since he once worked for Bethlehem Steel.

"He told me my wife looked like Sally Struthers, and so for her birthday he did a caricature of her and wrote, 'Happy Birthday, Sally,'" Frank Walls of Whallonsburg said.

"We made him the unofficial president of the Do Nothing Club, which is a hard thing to do as we don't vote on anything."

With a chuckle, Dean Caveney of Willsboro Point recalled Sid's passion for the Cleveland Indians.

"Of course, my love for the Yankees did not go along with that, which made for a lot of fun," he said.

Although Sid was king when it came to surprising folks, Castine got the better of him one time — arranging for him to toss out the first pitch at a Montreal Expos game when Cleveland was in town.

Typically, Castine said, the person given that honor just goes out and throws the ball.

That first pitch became a production, as Sid cleaned his cleats, checked the catcher's signs with binoculars ...

"He spent three or four minutes at it," Castine laughed at the memory. "He was always looking to get as much fun out of everything that he could."

The spin-off from that adventure was the First Pitch Hall of Fame that Sid established — and the baseball cards he created for himself and gave to friends as souvenirs.

No one talks about Sid's artistic skill, his infectious sense of humor without mentioning the purity of his spirit.

"He loved life and everything in it," said Bob Grady, former editor at the Press-Republican. "A hundred years from now, people will see his drawings of Richie Rich, Little Lotta and Champy and say, 'There was a nice man, a gentle man — somebody I'd like to have known.'

"He was a very giving person," Klink said.

Sid was not just a world-class illustrator, but a man beloved by everyone who knew him, Essex Town Supervisor Sharon Boisen said.

"Sid was a wonderful person. This is a loss not just to the community of Essex, but to the North Country itself. Our hearts go out to his family and friends," she said.

"Sid should have been a lot more renowned. Looking at his work, you can realize that."

Boisen said he will be greatly missed.

"He's always been lovely, he and his wife, Ruth. I think so highly of both of them."

"Although Sid was full of humor, he was not profane, and did not like harsh language," Dr. Nick Muller of Essex said. "Sid was a true gentleman. He loved talking to people, especially when he did things like setting up a booth during Essex Days to sell his Champy prints."

Local historian Morris Glenn first met Sid in the 1960s, and the two worked together on several publications, the most recent entitled "A Walk Around Whallons Bay," expected to be published this summer.

Another book they collaborated on, "A Sketch Book of Essex County Railroad Stations," shows Sid's attention to details with his precise pen and ink drawings.

The two also shared a fascination with Champy.

"He was the Pied Piper of Champ," Glenn said.

When Sid learned his time on earth was winding down, he had Ruth phone the news to his friends in the North Country and beyond.

And she passed along the message that he was thinking about them.

Last week, his daughter, Laura, her husband, Tony, and their children, Lucas and Cristian, traveled to Inman to spend time with Sid.

"We had a great day Friday," Suze said.

A service for Sid will take place in Inman and another will be held in Essex in late spring or early summer, she said.

She also smiles at the thought of Sid in heaven, bringing along his endless ideas and cast of many cartoon characters.

Laura said it best on her Facebook page, Suze said, when she wrote: "I wonder how the Pearly Gates will look with dots on them."

Have you voted in the midterms?