The Montreal Science Centre takes a step back in time with "Dinosaurs Unearthed." 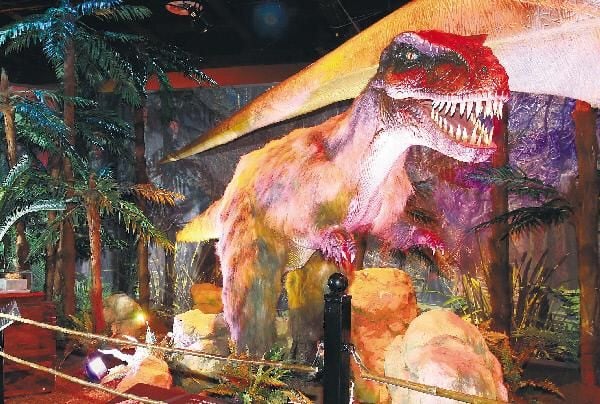 The Montreal Science Centre takes a step back in time with "Dinosaurs Unearthed."

The Montreal Science Centre takes a step back in time — a very big step — with their newest exhibition, "Dinosaurs Unearthed."

"Dinosaurs Unearthed" offers a collection of 14 life-size dinosaur replicas accurately constructed down to skin color, texture, movement and sound based on paleontological data. This menagerie of animatronic beasts includes a stegosaurus, tyrannosaurus rex and triceratops.

The trail of dinosaurs begins with creatures of the raptor kind.

Many dinosaurs sported a full coat of feathers, which confirms that dinosaurs were the ancestors of modern-day birds, the exhibit explains. There was a simple reason for this ancestral trait — feathers kept the creature warm.

But if the looks of the velociraptor, micraptor and 24-foot-tall gigantoraptor on display are any indication of prehistoric terror, one can quickly sum up that a day in Jurassic Park was no bird-watching walk in the woods.

While the likes of an omeisaurus gets the nod for size — its neck could reach up to 30 feet long — the tyrannosaurus rex wins the prize for its ability to induce sheer spine-tingling panic. This stalking, killing machine is considered the last great carnivore of the Late Cretaceous period, which dates to 65 million years ago. Known as the "King of the Tyrant Lizards," a T-rex had enough strength in its jaws to lift a semi tractor-trailer, according to the accompanying text. And they lived fairly close to home. T-rex bones have been discovered in Montana, Colorado and New Mexico.

Another North American dinosaur cousin was the stegosaurus. Its most distinctive physical attribute was the 17 alternately arranged dorsal plates along its spine.

The plates served a number of purposes, including heat regulation, body armor and, surprisingly, those dorsal plates were often very attractive to a stegosaurus of the opposite sex. For the stegosaurus on display, visitors can control the real-life model through eight different movements.

Also on display are some 20 fossil replicas. While they're not real, they are true to life. The replicas include dinosaur eggs, dung and three complete, full-sized skeletons. A re-created archaeological dig station also lets kids channel their inner paleontologist.

The exhibition also brings to light the world of illegal fossil trading.

Countless specimens are lost to private collectors who are willing to pay fossil hunters big bucks instead of using the finds for scientific research. A T-rex skeleton can fetch up to $8 million.

Most of the young audience uttered squeals of dinosaur delight while a select few preferred to bury their heads in Mom or Dad's coat. That said, there is plenty to do at the Science Centre if your child prefers to ditch the dinosaur exhibit.

Admission also includes access to the Science Centre's four permanent exhibitions: "Science 26," which offers low-tech science fun from A to Z; "Mission Gaia," an interactive environmental game where teens unite to save humanity; "idTV," which lets visitors create their own multimedia news report"; and "Imagine," an interactive space that explores the wonders of technology.