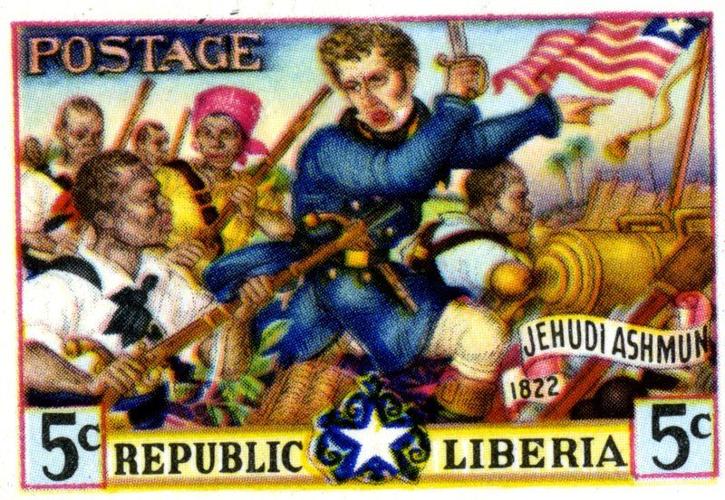 Jehudi Ashmun, a 28-year-old American missionary and fourth governor of Liberia, is depicted on this stamp designed by artist Arthur Szyk and issued by the Republic of Liberia on April 14, 1949. It depicts Ashmun as a blue-coated warrior of 1822, waving a sword and urging his small band of American freedmen to defend Cape Mesuado’s stockade. 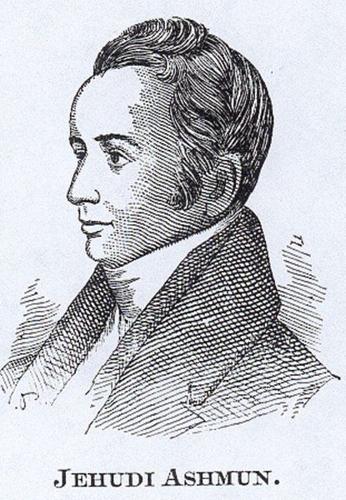 Jehudi Ashmun was born in Champlain, NY. He was one of 10 children of Samuel and Parthenia (Raymond) Ashmun.

Jehudi Ashmun, a 28-year-old American missionary and fourth governor of Liberia, is depicted on this stamp designed by artist Arthur Szyk and issued by the Republic of Liberia on April 14, 1949. It depicts Ashmun as a blue-coated warrior of 1822, waving a sword and urging his small band of American freedmen to defend Cape Mesuado’s stockade.

Jehudi Ashmun was born in Champlain, NY. He was one of 10 children of Samuel and Parthenia (Raymond) Ashmun.

CHAMPLAIN — The 2014 West African Ebola outbreak may seem worlds away, but there is a historical link between Liberia and the North Country.

It’s quite possible that the West African country wouldn’t exist today had not Jehudi Ashmun been appointed the fourth governor there from 1822 to 1828.

Jehudi was born in Champlain on April 21, 1794, the third of Samuel and Parthenia (Raymond) Ashmun’s 10 children.

He studied at Middlebury College and the University of Vermont before he became a legend in Africa.

He is one of Champlain’s illustrious natives.

“He is one of the famous ones,” said Celine Paquette, founder of the Samuel De Champlain History Center in Champlain.

Jehudi attended school in Champlain until he began his college studies at age 16.

During the War of 1812, he gave sermons at the local church and organized a militia to protect Champlain from British forces, according to the article “Noted Men & Women of the Champlain Valley and the Adirondacks” published by the Plattsburgh Sentinel on Jan. 23, 1891.

He earned money for his college expenses as a schoolmaster in Champlain in 1815. In March 1815, that amount was $66.

He entered Middlebury College in September 1812.

“He’s included in our archives along with other interesting alumni from Middlebury’s history who attended Middlebury in the past,” said Sarah Ray, director of media relations at Middlebury College.

Possibly due to economics, Jehudi transferred to the University of Vermont during his senior year, graduating 1816.

He gave the salutatory address and presented “An English Oration upon the Philosophy of the Mind,” according to Lawrence P. Gooley’s 2011 article published in the Adirondack Almanac.

After his graduation, Jehudi became a principal and a professor of classical literature at the Bangor Theological Seminary in Maine, where he was also ordained a minister.

On Oct. 7, 1818, he married the former Catherine D. Gray, who had attended a girl’s school in Middlebury and also taught briefly at the Champlain school before their marriage.

On April 17, 1819, he resigned his post in Maine, and the Ashmuns relocated to Washington, D.C.

There, Jehudi ventured into publishing with the Constellation, a weekly in Baltimore, and The Theological Repository of the Episcopal Church.

The “E” word was emancipation during the early 19th century, as pro- and anti-slavery factions tussled over the “peculiar institution” and where men and women of African descent should reside after being granted their freedom.

In D.C., Jehudi edited “Memoirs of the Life and Character of the Rev. Samuel Bacon, A.M.”

Bacon was a U.S. Marine officer, Pennsylvania attorney and Episcopal minister who died trying to establish a colony for free people of color in Africa.

Drawn to the work of the American Colonization Society, he founded the African Intelligencer, which was devoted to the society’s mission of repatriating free blacks.

Inspired by Bacon’s example, Jehudi was appointed an agent of the American Colonization Society.

He and his wife sailed on The Strong from Baltimore on June 20, 1822, to the Pepper Coast, according to the Sentinel.

They were accompanied by a group of settlers and missionaries and arrived at Montaerade (Cape Mesurado) on Aug. 8.

The fledgling colony of Liberia, numbering 130 souls, was in disarray and threatened by disease and warfare by indigenous Africans — the Mamba, Vai and Dey.

While Jehudi donned the hats of minister, soldier, legislator and engineer, Catherine succumbed to a fever and died on Sept. 15, 1822, according to the Sentinel article.

In the midst of 15 other deaths, hostilities against the settlers by indigenous Africans never ceased.

“All the tribes around us are combined in war against us. Their principal object is plunder. We are surrounded only with a slight barricade and can only raise a force of 30 men. Have not time, limits nor the means to erect an effectual and permanent fortification. Nor any means except what causally offers of sending to Sierra Leone for aid. We endeavor to make God our trust.”

Jehudi succeeded in stabilizing Liberia in 1823 and remained as governor until his departure on March 26, 1828.

“A great concourse of people attended his funeral, the sermon being delivered by Rev. Leonard Bacon. His mother arrived from Champlain only in time to press her lips to the coffin of the beloved son at the conclusion of the first prayer, and in the presence of the assembled and weeping multitude who had come to his burial.”

In Champlain in 1938, a New York State Education Department marker was placed at the site of Jehudi’s birthplace.

In 1959, a memorial was dedicated in his honor in Paquette Park.

Francis A. Dennis, the first secretary of the Embassy of Liberia in Washington, D.C., was in attendance.

“It was a big deal,” Paquette said. “ When I see President  Ellen Johnson Sirleaf on television, I think of Jehudi and the American connection.”