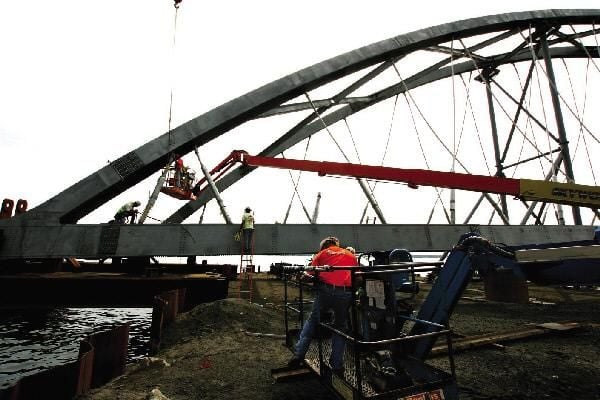 At Velez Marine in Port Henry, workers from Flatiron Construction of Colorado were in the process of constructing the central span of the Lake Champlain Bridge last week, The completed span is scheduled to be floated to the Crown Point site on Friday. 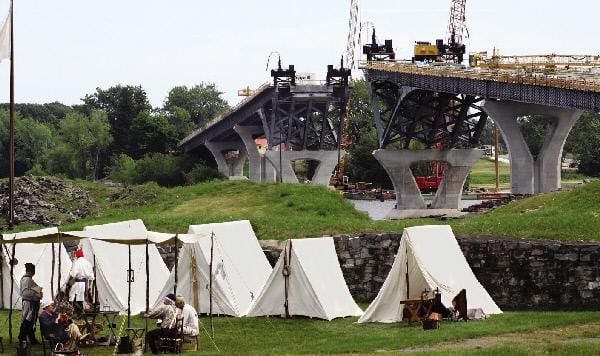 Re-enactors and tents from a recent French and Indian War encampment in Crown Point are dwarfed by the Champlain Bridge currently under construction in an almost surreal juxtaposition of old and new.

At Velez Marine in Port Henry, workers from Flatiron Construction of Colorado were in the process of constructing the central span of the Lake Champlain Bridge last week, The completed span is scheduled to be floated to the Crown Point site on Friday.

Re-enactors and tents from a recent French and Indian War encampment in Crown Point are dwarfed by the Champlain Bridge currently under construction in an almost surreal juxtaposition of old and new.

The former railroad shipping-dock beach became a construction zone for the arch that will close the gap in bridge spans now reaching toward each other between Crown Point and Addison, Vt.

Construction is complete on all seven concrete piers that hold the bridge roadway deck.

The New York State Department of Transportation and VTrans still intend to open the bridge on schedule by Oct. 9.

The date for the celebration marking its completion has been changed from Oct. 15 and 16 until May next year due to uncertainty over when the bridge will be finished.

HNTB engineer Ted Zoli designed the $70 million structure — a tied arch that is a unique feat of metal and cable.

Crews from Flatiron Construction have worked under contract from frozen winter's ice through record-high Lake Champlain water levels in spring.

It is nearly time to put the two pieces together.

The arch span will be floated on two barges from Port Henry to the bridge and then hoisted into place using what are called strand jacks.

DOT updates show about half of the 64 cables are installed on the arch.

But before moving the 402-foot steel structure, the hanger cables must be precisely tensioned, according to DOT Regional Construction Engineer John Grady.

In an email interview, he explained that the arch itself is made of structural steel, and its deck is reinforced concrete.

The arc of the "arch" is formed in seven "ribs," Grady said, "or what could be called chords or curved pieces."

The "ties" are actually called hangers.

"The hangers — what many people may call cables — on most tied-arch bridges are vertical. On a 'network' tied arch like the Champlain Bridge, the 'network' hangers are inclined and generally cross or intersect another cable twice, causing the structure to act like a truss," Grady explained.

"The term 'tied arch' refers to the fact that the arch is tied together at the bottom by a 'tie' beam."

Upon arrival in Crown Point, the arch span will be maneuvered slowly into place.

"In essence, it sits on the ends of the Vermont and New York approach bridge spans," Grady said.

To float the arch across the short, swift waterway between Velez Marina and the bridge piers, DOT will work with the U.S. Coast Guard and marine police agencies to curtail boat traffic and reduce wake activity.

Grady said specialized tugboats would be used to orient the arch in place at the bridge site and stabilize it.

"The arch span will be lifted using strand jacks, not cranes," he said.

"Strand jacks are specialized hydraulic jacks that are commonly used for very heavy lifts and will be positioned on the end of both the New York and Vermont approach spans.

"Strand jacks work like climbing a rope. Think of a hydraulic jack or cylinder with a bunch of cables running through the middle, with squeeze locks at top and bottom.

DOT has not set a certain date for the big float, which is expected to start at sunrise and take about four hours one day next week.

The lift itself will take about eight hours, happening only when conditions are right — with no high winds or lightning.

At peak construction times, as many as 25 workers have been employed at the arch assembly yard, Grady said.

The construction of the arch superstructure has been under way since late January 2011.

84, of Burke, died Thursday, March 4, 2021, at his home. Arrangements are with the Chateaugay Funeral Home, 36 Church St., Chateaugay.