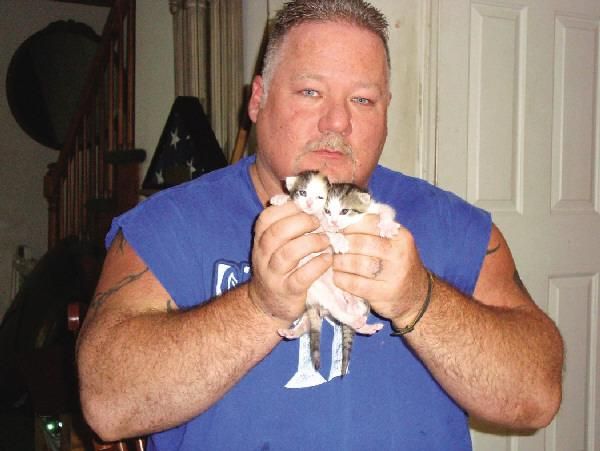 Robert Lavigne holds the two kittens that survived their unconventional birth in the backseat of his Jeep. In about a month or so they'll be up for adoption. E-mail Lavigne at mean53@hotmail.com. 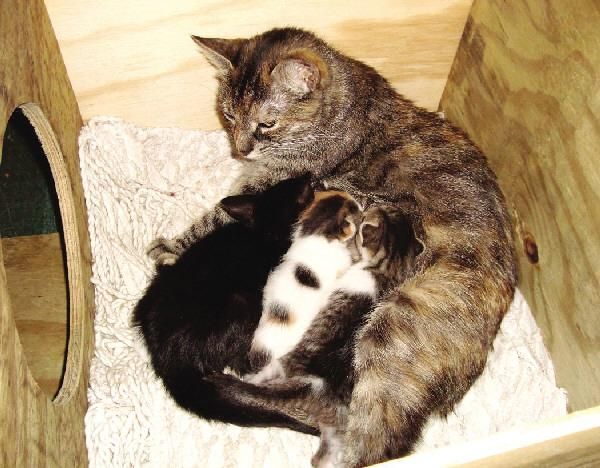 Outside Cat, in her custom-made house, cares for her two kittens and the runt from another litter that joined the trio.

Robert Lavigne holds the two kittens that survived their unconventional birth in the backseat of his Jeep. In about a month or so they'll be up for adoption. E-mail Lavigne at mean53@hotmail.com.

Outside Cat, in her custom-made house, cares for her two kittens and the runt from another litter that joined the trio.

Late one night, driving his Jeep to work, Robert Lavigne felt an ominous presence in the vehicle.

"All of a sudden this thing, this wet, bloody thing jumps on my dash (from the backseat)," the Peru man said. "If you've ever seen a movie of a big guy screaming like a girl … I screamed, drove my Jeep off the road."

The car plowed into a field; luckily, no trees, ditches or boulders were in the way.

He'd thought the creature in his car was a raccoon.

"I was getting ready to get out and run. Raccoons are very fierce, and I thought it was going to attack me."

The "raccoon" turned out to be a stray cat that Robert and his wife, Jennifer, had been feeding and had come to call Outside Cat.

"She looked up at me and meowed, like she was trying to say, 'Help me,'" Robert said.

So he called his wife. "Outside Cat's in the Jeep, what am I supposed to do? I can't come home," the frazzled man told her.

"Are you sure?" she recalled asking him.

Then Robert heard mewing in the back seat.

"She'd had kittens in my jeep," he said.

The couple had had no idea Outside Cat was an expectant mother.

Robert made the rest of the 65-minute drive to work from Peru to Bare Hill Correctional Facility in Malone and asked his sergeant, 'Can I go home? I've got a bloody cat in my Jeep."

That was an excuse the sergeant had never heard before.

Outside Cat had given birth to six kittens, but sadly, only two lived long enough to make it back to the Lavigne home.

Then the cat — true to her name — wouldn't come in the house. So Robert built her a little house in the living room where she could care for her kits in privacy.

The house, with a roof that lifts off for easy cleaning, is not quite as elaborate as the "kitty city" Robert had built for his "inside cats." Standing in the kitchen, the carpeted pillar boasts a basket, ledges and toys. And it swarmed with a different batch of kittens.

The Lavignes's toy dachshund, Madison, adopted Outside Cat's new babies and also the runt kitten of the older litter. The three little fur balls stay cozy with Outside Cat in their little house; then, whenever Mom leaves the nest, the dog rushes in to protect and spend time with them.

"We have a hard time getting her to leave the box. She even growls at us," Robert said.

The kittens are about four weeks old now, and once she weans them, Outside Cat will have a date with the veterinarian to be spayed.

How did she even get into the Jeep in the first place?

"I had the window open a crack, so it would have had to do some kind of acrobatic feat to get in there," Lavigne said.

NORTH HUDSON [mdash] Roscoe Stanley Herrick, 72, loving husband and father, passed away Jan. 19, 2020, at his home. He was born May 13, 1947, in Ticonderoga, N.Y., the son of the late Roscoe L. and Agnes (Armstrong) Herrick. He was a graduate of Ticonderoga High School, and upon graduation h…