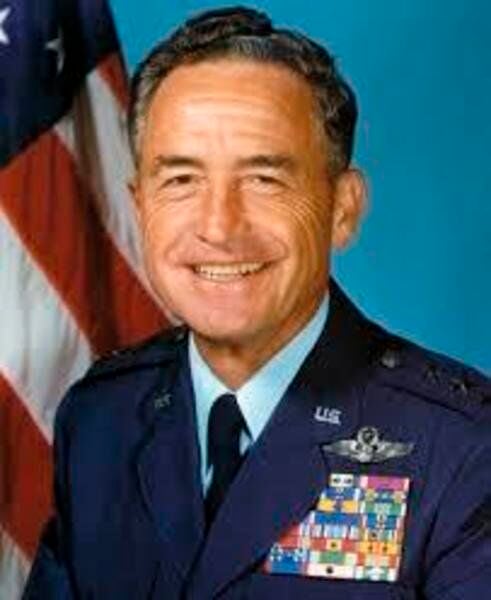 PHOTO PROVIDEDLt. Gen. LeRoy Manor wears Command Pilot Wings and accumulated over 6,500 flying hours during his Air Force Career, as well as flying 347 combat missions during World War I and the Vietnam War. 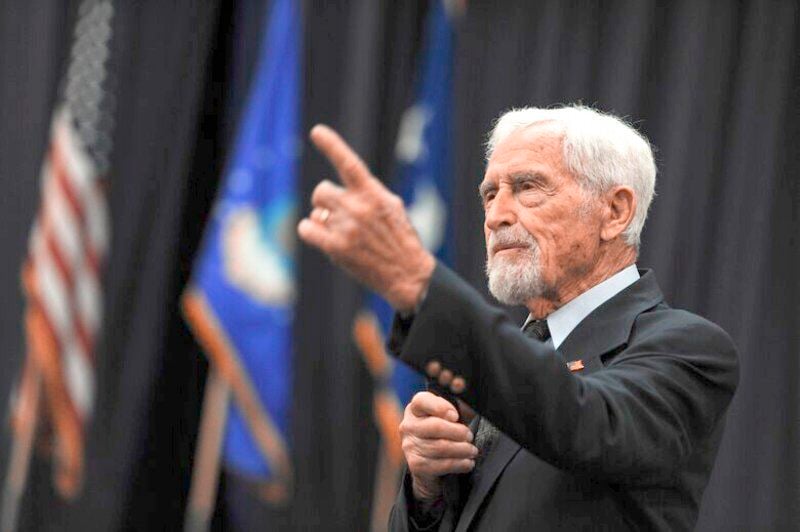 PHOTO PROVIDEDLt. General Leroy Joseph Manor, (USAF Retired) was a sought after speaker for his cockpit views of the Normandy Invasion during World War II and the Son Tay Raid in Vietnam. He was born Feb. 21, 1921 on his ancestral farm in Morrisonville on a road that bears his name. 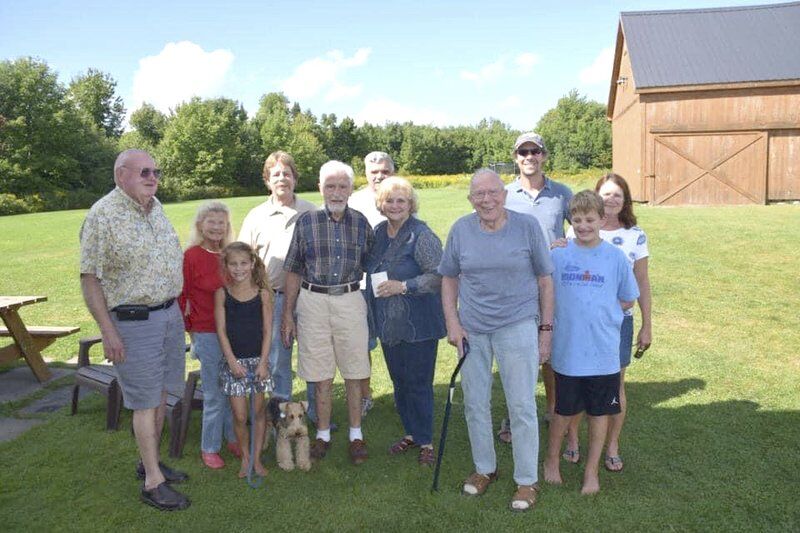 PHOTO PROVIDEDLt. Gen. LeRoy Manor wears Command Pilot Wings and accumulated over 6,500 flying hours during his Air Force Career, as well as flying 347 combat missions during World War I and the Vietnam War.

PHOTO PROVIDEDLt. General Leroy Joseph Manor, (USAF Retired) was a sought after speaker for his cockpit views of the Normandy Invasion during World War II and the Son Tay Raid in Vietnam. He was born Feb. 21, 1921 on his ancestral farm in Morrisonville on a road that bears his name.

A P-47 fighter pilot during World War II, he flew in 72 combat missions including during the Battle of Normandy.

During the Vietnam War, he commanded Operation Ivory Coast to rescue prisoners of war at Son Tay in North Vietnam.

Manor was born Feb. 21, 1921 in a two-story Beekmantown farmhouse, the home of Walter and Rose Delia (Liberty) Manor and their five children – Harold, LeRoy, Dorothy, Lewis and Lawrence.

LeRoy attended a one-room schoolhouse in Beekmantown District No. 10.

He graduated from Cadyville High School in 1937.

He attended the Plattsburgh Normal School, where he met his wife, a fellow teacher, Delores H. Brooks of Scotia.

To this union were born three children – Alan, Mary and Dean.

After college, LeRoy taught two years at his grade school, until he signed up for military service prompted by the infamous events of Dec. 7, 1941.

“I thought this is something I should get involved in,” Manor said in a Sept. 10, 2014 Press-Republican article, “Gen. LeRoy Manor's long, long road.”

“I owed that to my country to do something in that regard. The attack was terrible.”

He was commissioned a 2d Lt. and awarded his pilot wings at Spence Field, Georgia, on Aug. 30, 1943, and after completing P-47 Thunderbolt training, he was assigned to the 365th Fighter Squadron of the 358th Fighter Group in Europe from December 1943 to September 1945, according to VeteransTribute.org.

During the Normandy Invasion, LeRoy's squadron patrolled the beach and flew two missions daily out of England.

“It was just before daylight, the paratroopers had just landed, and the glider troops were coming in. We were escorting over the glider troops to make sure no German aircraft would become involved,” he said in the 2014 P-R article.

LeRoy watched plywood gliders come in as they were dropped from C-47s.

“I had a ringside seat for the greatest show I think that you could imagine that has happened in our century, well, the last century,” he said.

“We’re in a new century now. I can close my eyes and have a vision of what I was seeing happening that day.”

“We grew up on the Gen. Manor Road right next to the farm where he grew up at,” Jerry Manor of Massena said.

“By the time that we came up, he was already in the Air Force, had been for awhile. But during the summer, I remember he used to come home.”

LeRoy stabled horses on the farm he owned next door and visited throughout the year.

“Of course, our cousins would be with him as well,” Jerry said.

“It was just nice to see him."

When LeRoy lived in Virgina, Jerry visited him there a few times.

LeRoy also frequented a Massena campground and motored over to dine with Jerry's family.

“He was the Class of 1940 at Plattsburgh State,” Jerry said.

“They had a ceremony for him. He got up and spoke, and he was well into his 90s then.

“He spoke about his time in the Air Force and many of the things he did. He was in World War II. He flew combat air patrol over Normandy during the invasion, which was just fascinating to me, and of course his other exploits along the years.”

“He did a nice talk there at the reunion dinner,” Bob said.

“We all went to that. He talked about the Normandy Invasion. It was really interesting. It was pretty neat.”

In May 1968, LeRoy assumed command of the 37th Tactical Fighter Wing at Phu Cat Air Base in the Republic of Vietnam.

“He was just an amazing guy. He was a very good speaker, and I think that came from the fact that before he went in the Air Force he was a teacher.

“So, he was very good at using his teacher voice. He was just an amazing guy, and I'm very, very proud to be his nephew.”

“Then, there was Lewis, who died in his youth,” Jerry said.

“And then, there was my dad, Lawrence. He is still alive and lives in Potsdam. He will be 89 in September.”

Lawrence, a retired New York State Trooper, relocated his family to Potsdam when he got a promotion in Canton.

“I was in college when he passed away. My grandmother stayed there until she was 92. She moved to assisted living in Potsdam to be nearer to us and passed away when she was 95.”

Bob shares his brother's summer memories of their Uncle LeRoy.

“The thing about him is that despite all of his many, many accomplishments, he was just a kind man,” the Morrisonville resident said.

“He had met presidents, and he had met foreign leaders and all of that. He was a regular down-to-earth guy. He always took the time to show an interest in what I was doing, what my family was doing, just a kind, compassionate person.”

LeRoy's grandparents, Amos and Mary Jane (Gratto) Manor, immigrated from Quebec and built the farmhouse on the 100 acres where generations of Manors were born, farmed and thrived.

“He asked where I was, and I told him I was at the farm. That's what we call the house that he grew up in. Dean (LeRoy's son) was with him and said his face lit up.

“We talked for a little while just about his memories of the farm. It was a nice conversation. I was really glad that I had that final opportunity to speak with him. He made a 100.”

“Everybody in our family looked up to him,” Dan said.

“He treated everybody with respect, you know. He was quite a famous person in military circles, but he was just a down home guy and very nice and friendly to everybody. I certainly respected him greatly.”

Dan retired after a 41-year career in law enforcement.

“Every time I spoke with my uncle, he would ask me about it,” Dan said.

“He seemed quite interested in it, which always made me feel good. My dad just turned 88, and he's mourning the passing of his brother.

“He and his brother talked frequently on the phone. Now, Dad is the last of the five children that my grandparents had.”

The Rev. Donald Kramberg officiated at a special Mass in LeRoy and Delores' honor celebrating their 70th wedding anniversary, a little early on Aug. 8, 2010 at St. Joseph's.

“I live on Dubrey Road in Chazy Lake, and they renamed the street after him, Gen. LeRoy Manor,” Azar said.

“It used to be French Settlement Road about 20 years ago.

“He was the former president of the Military Officers Association of America. He's down here in Florida, and that's where my wife and I come down for the winters.”

“We had really good conversation. He's a religious man. He served in many wars.

“But he's highly respected by so many other general officers and pilots for his ability to conduct many war plans during Vietnam and Korea.”

“When he retired, he served continuously helping future military officers,” he said.

“He was very generous and a very humble man. He always had the spirit of what can I do for you? How can I help you?

“Every time I left him, we would always have a prayer together.”

Col. Joseph B. McNichols Jr. (USAF Retired) met the legendary Air Force aviator only once when LeRoy was the inaugural guest speaker at the opening of the Plattsburgh Air Force Base Museum in 2014.

“He was 93 for that one, so seven years ago,” the Cliff Haven resident said.

“It's remarkable when you consider what he did for a living, you know being a fighter pilot.

“He did the raid on Son Tay, even though nobody was there. I was over there in Vietnam when it occurred.

“He done good for a North Country kid. A true war hero.”