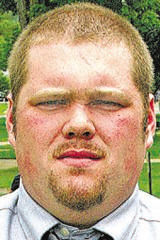 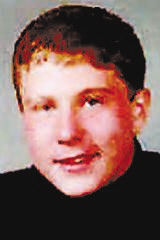 ELIZABETHTOWN -- Steven Baker pleaded guilty to a top count of manslaughter in Essex County Court Thursday for driving drunk and hitting and killing Albert Montanaro III on Jan. 16, 2006. Baker will likely serve two and one-third to seven years in prison. He waived any right to appeal. Baker's guilty plea avoids a second trial. The original guilty verdict, handed down after five days of witness testimony, was overturned on appeal because the prosecution did not lay proper foundation for blood-alcohol tests. SENTENCE DELAY Baker, 26, of West Chazy asked that sentencing be delayed until September so he could see his daughter off to school. District Attorney Julie Garcia asked Judge Richard B. Meyer to speed up sentencing, closing the time the Montanaros would have to wait for the last day in court. "It's not fair to the victim's family to prolong sentencing so Baker can spend time with his family." "He wants to go with his daughter when she goes to school," Public Defender Livingston Hatch told the court. "And straighten things out in his life before he goes back to prison." Meyer set the date to Sept. 16 and ordered a pre-sentence investigation. "He's appeared every time," Meyer said, setting no bail. "That concludes this case." RELEASED Baker was released on his own recognizance and left the courtroom quickly with his mother and stepfather. Hatch said the lesser sentence -- second-degree manslaughter normally carries four to 12 years -- was part of the agreement. "The purpose of the plea is to reduce the cost, to not go through the whole thing (trial) again," Hatch said. "Remember what happens if you keep the blood-alcohol count out. There's no case." NO CONFESSION Besides the guilty plea, Garcia asked that Baker be ordered to give an admission, addressed to the Montanaro family, telling them just what happened the day Albert was killed. But Meyer said the statement was not necessary, since Baker had already testified in court during the jury trial. Garcia said the statement would have at least helped bring closure to Albert's family. "They needed to hear what happened that day. And they needed the defendant to take responsibility for his actions." The record holds no real explanation beyond a plea of guilt, Garcia said. "With all due respect to the judge, I disagree with his position that the defendant's testimony is reason to forgo allocution. Baker never admitted passing on the double solid line, never admitted intoxication, never admitted being reckless, never admitted driving over the fog line, never admitted that he was speeding." Garcia added that she has "my statutory and constitutional obligation by securing a conviction to manslaughter and DWI. I prosecute the cases, and the judge is responsible for sentencing defendants." BITTER END But it was a trial the Montanaro family wanted. Nora Montanaro, Albert's mother, shook with rage in tears on the court steps after the hearing. "There was no truth today," she said. "He (Baker) didn't tell us what happened. "¦ He cut my son's body in half." Mrs. Montanaro clutched several items in her hands she had hoped to give Baker's mother. One was a photocopy of a picture of Albert in his casket at the wake. The other was a MADD emblem for a car bumper. "I want her to see my son in a casket," Mrs. Montanaro said. "This is what her son needs to remember. Everything he did killed my son." The Montanaro family was incensed by terms of the plea deal. "He admitted guilt to manslaughter, and he gets a summer vacation," Mrs. Montanaro said. "It doesn't make sense. There is no justice in Meyer's court." Albert's two younger brothers, Thomas, 19, and Lawrence, 15, cried as they emerged from the courthouse. Both Mrs. Montanaro and husband Albert Montanaro II are professors at Plattsburgh State. They had taken the summer off anticipating a retrial, she said. "I don't get it," said Susan Speranza, Albert's aunt. "He (Baker) gets to spend time with his daughter? And Nora didn't get to see Albert graduate from college. This sets a dangerous precedent for other kids." ALBERT REMEMBERED As composure returned, Mrs. Montanaro spoke of the high regard her son Albert had for the law. Studying to become a police officer, he had scored 19th overall on the state trooper exam. "There were 25,000 to 27,000 people who took that test," she said. "He was a great kid. He never got in trouble. He never had a time out. He worked four jobs. He paid for his own education. "He was killed by his opposite," Mrs. Montanaro said. "If there's a reason for that, I don't know. He's in heaven, jogging on streets of gold." kdedam@pressrepublican.com

What type of weather would you rather have?