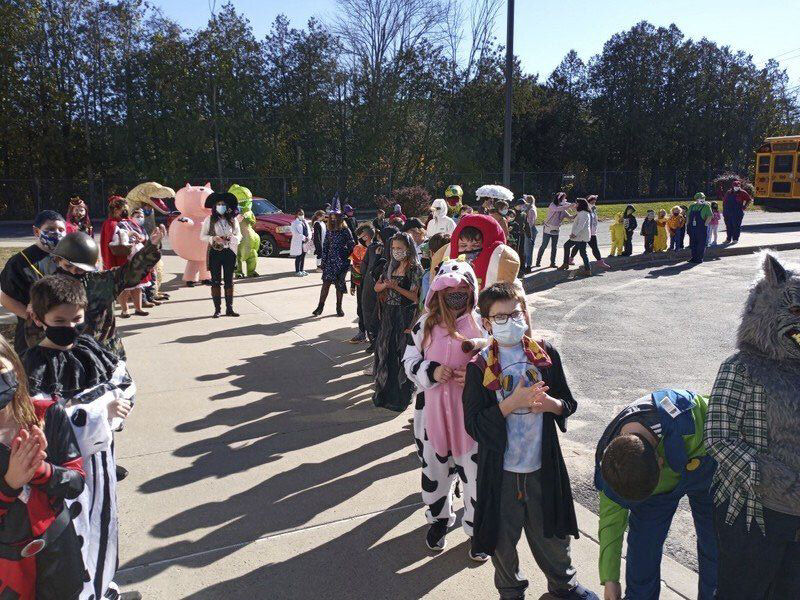 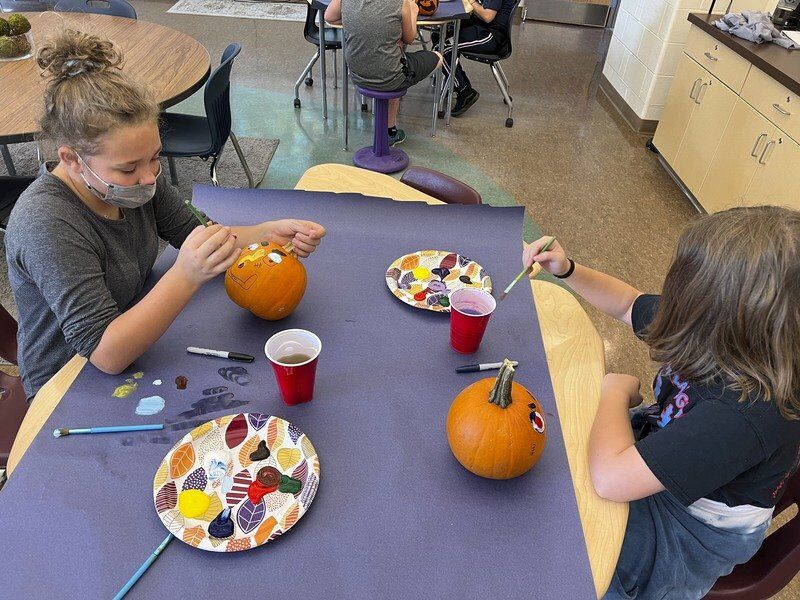 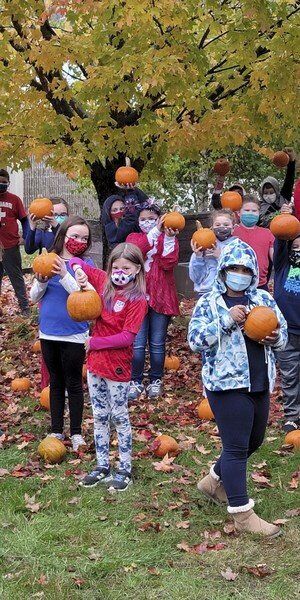 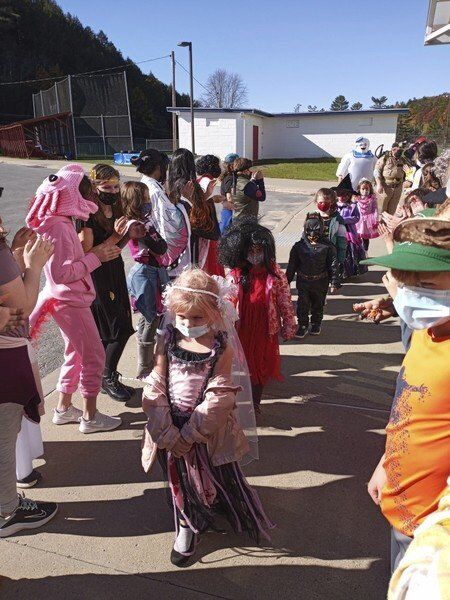 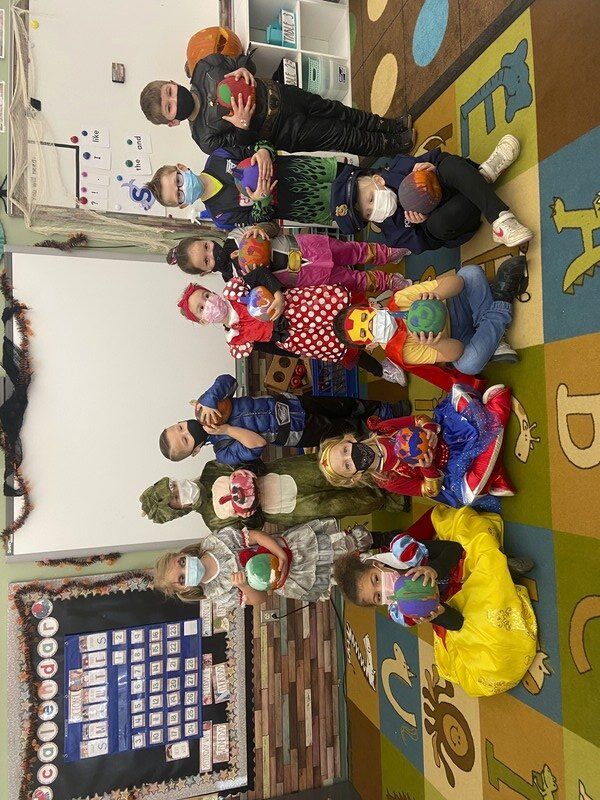 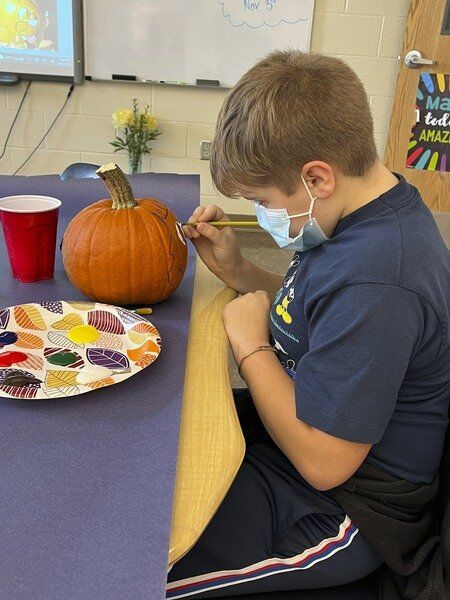 An AuSable Forks student decorates a pumpkin from the school's homemade pumpkin patch during Spirit Week last month. In addition to 230 smaller pumpkins for each of the students, the school also received 10 larger ones so classrooms could do more activities.

An AuSable Forks student decorates a pumpkin from the school's homemade pumpkin patch during Spirit Week last month. In addition to 230 smaller pumpkins for each of the students, the school also received 10 larger ones so classrooms could do more activities.

“We’re still trying to give students as much as possible of normalcy in the school building,” he said.

“If there are opportunities for outdoor activities and field trips and things, we’re excited about making that happen if we can as long as they’re safe and sound."

Kate Frederick, a teacher at AuSable Forks Elementary and Dustin’s wife, explained that the Prays initially reached out to her offering to donate pumpkins, as with previous years.

When she asked around, every single teacher at the school jumped on board, wanting pumpkins for their students.

The Prays agreed to make it happen with Mountain Man Construction. Then fellow teacher Daryl Johnson approached Frederick with an idea: making a pumpkin patch.

“Many of our own little kiddos here are missing out on going to the pumpkin patch and the apple orchard this year, which is a classic fall field trip we do,” Frederick said.

So, on Oct. 24, she and her husband set up rows of the orange gourds in an area next to the school that has a maple tree and an apple tree. Other teachers made a scarecrow and brought in lawn ornaments to decorate.

“The kids have been enjoying picking their pumpkins and going outside and making it their own,” Frederick said.

“It’s been fantastic to see what each class is doing with their pumpkins.”

Frederick explained that, in addition to 230 smaller pumpkins for each of the students, the school also received 10 larger ones so classrooms could do more activities.

“Students could do like a pumpkin study, where they kind of learn about the ins and outs of the pumpkins.”

Frederick said librarian Caroline Douglas was planning to do a contest to have students guess how many seeds were in a pumpkin.

She herself had fifth- and sixth-graders paint theirs, providing funny pumpkin faces as examples.

“The artistic talent that’s coming out of these fifth- and sixth-graders is absolutely incredible, and how individual each pumpkin is is absolutely amazing,” she said.

Defayette added that, in addition to helping bring students a sense of normalcy, the pumpkin patch fits in with the state’s new initiative focusing on social and emotional learning (SEL) and equity.

Frederick pointed to how first-grade teacher Jessie Pepe said one of her students had never gotten her own pumpkin before.

Defayette said it’s not just about the faculty, school board and Savage coming together, but the whole community as well.

“It really is everyone coming together for the well-being of children.”

Students in kindergarten through third grade went on the traditional parade through AuSable Forks dressed in their costumes.

Defayette added that some field trips have been re-created virtually, while Savage noted that COVID vaccination has enabled more opportunities at the higher levels.

Children ages 5 to 11 just became eligible for the COVID vaccine this week. The biggest challenge standing in the way of field trips so far has been busing as, if one student riding tests positive, it could result in many more having to quarantine.

“They’re doing more fun activities than they have in the last year and a half.”

Frederick added that AuSable Forks Elementary students usually go ice skating in Lake Placid, though that may be transformed into bringing back a winter carnival day at the school.

“We make them hot chocolate, we build snow cones from freshly fallen snow, so I think moments like that if we can bring those back this year, will be incredible.”

Savage framed how the school and greater community worked to offer the pumpkin patch as an example of how people in the North Country are always pulling together.