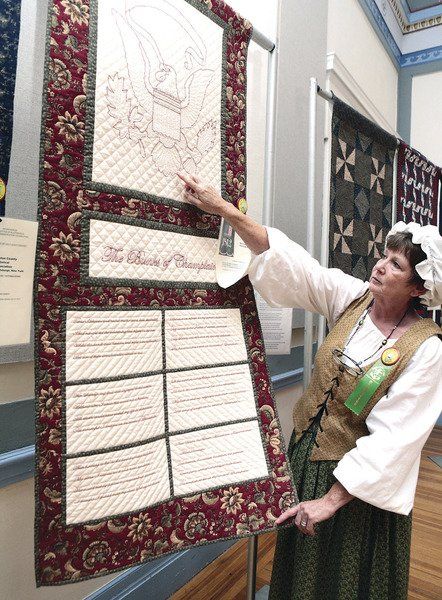 GABE DICKENS/P-R PHOTOJean Welch, co-chair of the Cot-to-Coffin Quilt Exhibit with Linda Harwood, shows off a quilt created by Kerry Sanger embroidered with lyrics to a song titled “The Banks of Champlain,” which is believed to have been written by Catherine Macomb, wife of Gen. Alexander Macomb, as she watched the Battle of Plattsburgh. The exhibit in the Plattsburgh City Hall rotunda is part of the Battle of Plattsburgh Commemoration. 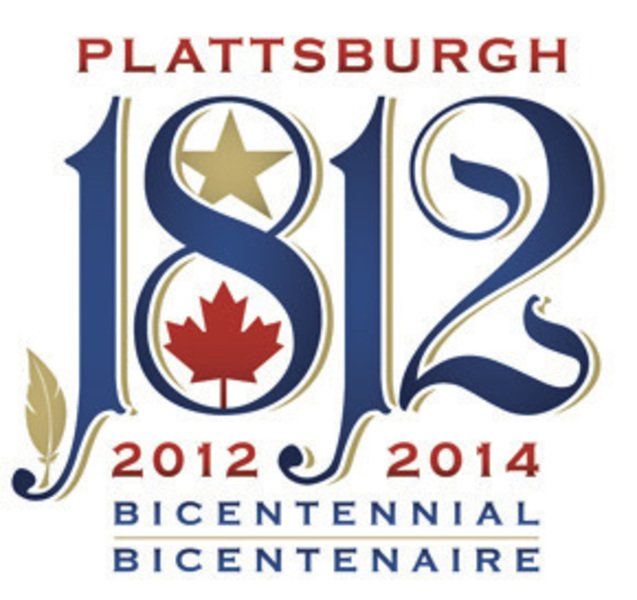 GABE DICKENS/P-R PHOTOJean Welch, co-chair of the Cot-to-Coffin Quilt Exhibit with Linda Harwood, shows off a quilt created by Kerry Sanger embroidered with lyrics to a song titled “The Banks of Champlain,” which is believed to have been written by Catherine Macomb, wife of Gen. Alexander Macomb, as she watched the Battle of Plattsburgh. The exhibit in the Plattsburgh City Hall rotunda is part of the Battle of Plattsburgh Commemoration.

She married her cousin Alexander Macomb, who would become known as the “Hero of the Battle of Plattsburgh.”

But Catherine made her own mark on local history, capturing the battle in song.

Catherine was born on Oct. 30, 1786, in Detroit, the daughter of William and Sarah Jane (Dring) Macomb, according to information on the Find A Grave website.

She and Alexander married on July 18, 1803, and soon started a family.

Catherine gave birth to 12 children. The website lists only six of them, not explaining if the others died or are simply unaccounted for.

It is said that while Catherine watched the Battle of Plattsburgh unfold around her, she wrote the song “Banks of Champlain,” set to the tune “Banks of the Dee.”

Even without music, the lyrics reveal a woeful wife, yearning for her soldier husband to return to her safely.

The work is timeless and has struck many a heart, including a local woman who incorporated the words into a quilt she created.

Kerry Sanger of Plattsburgh has a knack for collecting, creating and selling lovely linens and writes a blog called “Love Those Hands at Home.” In answer to a challenge from the Champlain Valley Quilters Guild, she created a block quilt, using Catherine’s lyrics.

On her blog, she wrote: “The challenge, called Cot to Coffin Quilts, has been used by different groups as they have celebrated the 200th anniversary of the battles of the War of 1812.

“I loved the idea that these quilts focus us on people often overlooked by history — the foot soldiers and the women left at home as the battles were waged.”

She continues: “I imagine a mother or wife hurrying to make a quilt to send with her son or husband, to keep him warm and to bring a bit of home into battle. And, should the worst happen, the quilt, and the love stitched in, could carry the soldier to his grave.

“The project allowed me to honor a song I have loved for a long time. I learned the song, ‘The Banks of Champlain,’ years and years ago from an album by my folk hero, Pete Seeger ...I love this romantic narrative, as it poignantly relays the thoughts of a woman who worries about her husband at war.

“She doesn’t just send him off to war and worry from afar but, rather, she watches as he fights the war before her very eyes. The quilt is hand embroidered and features the Great Seal of the United States, a design that was popular in the U.S. at the time.”

Like history coming alive, Sanger’s quilt and a number of others are on display at Plattsburgh City Hall for the Battle of Plattsburgh celebration.

Not only has the song been memorialized on a quilt, but local folk musician Stan Ransom included it on one of his albums, “The Battle of Plattsburgh, Music from the War of 1812.”

“While I believe that she wrote the song, the original (version), in Catherine’s handwriting, has never been found,” said Ransom, also known as “the Connecticut Peddler.”

He has done a great deal of research on the song and the lyrics and found that it was first published about 1814 by Nathaniel Coverly, a printer from Boston, but there is no accreditation to Catherine as the author on Coverly’s work.

The song was published again on a broadsheet about 1819 by Samuel Woodworth and John Woodworth but, again, there is no clear documentation.

Versions of the song published after 1844 are also slightly different. Some have suggested Catherine wrote it and then gave it to others to enjoy.

“I want to believe she is the one who wrote it,” said Ransom. “She was a good wife, concerned about her husband, and I believe she deserves the credit.”

Catherine died on Sept. 19, 1822, in Georgetown, District of Columbia, as a result of childbirth. She is buried in the Congressional Cemetery, Washington, D.C.

Alexander died in 1841 and was also buried there.

In 2008, Catherine and Alexander were exhumed while restorative work was completed on their crumbling monument.

Afterward, they were re-interred, together again.

Susan Tobias was born in Westville (Franklin County) and was the fifth generation to live on the McGibbon family farm. She has lived in Plattsburgh since 1970. She and her husband, Toby, have six children, 18 grandchildren and six great-grandchildren.