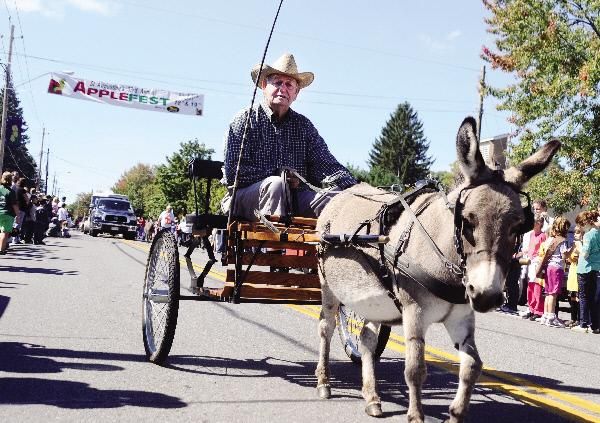 Jim Dugan takes a ride through the Applefest parade with the help of a donkey. 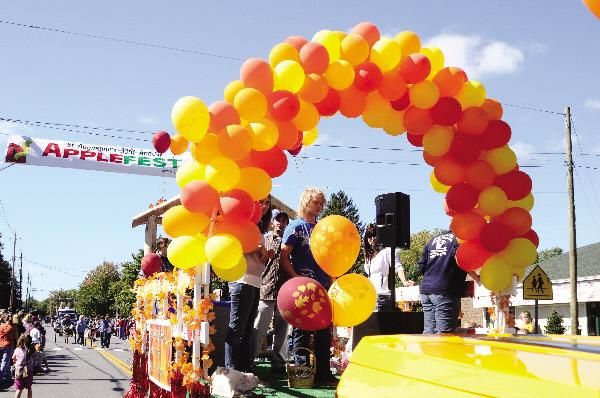 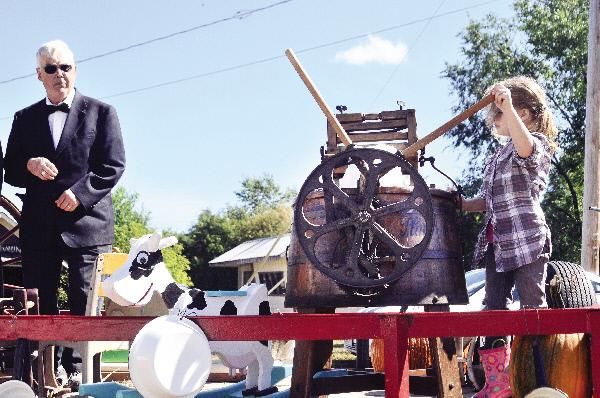 Jim Dugan takes a ride through the Applefest parade with the help of a donkey.

Fall is rapidly approaching, and in apple country that means it's time for St. Augustine's annual Applefest.

At Peru's 33rd gathering, friends, family and neighbors congregated at St. Augustine's Parish Center to play games and raffles, have a beer, sample delicious food or explore the 66 craft vendors set up on the grounds of the old school building.

Don McBrayer, event coordinator and chair of the planning committee, said this year's festival has been even more popular than last year. They had nice, but chilly weather last year, he said, but Saturday was just beautiful.

While the purpose of the volunteer-run festival is to raise money for the church, the most important aspect of the event is the chance for neighbors to gather, he said.

"It brings the community together," McBrayer said. "If we didn't make a nickel, we'd still do it."

One of the main attractions of the weekend event was the Saturday morning parade, which kicked off at 11 a.m. and featured the Fife and Drum Corps and Peru Marching Band.

McBrayer said that after the Farmer's Field Day was discontinued, Applefest became one of the few chances for the community to gather and bump into people they might not see on a regular basis.

This isn't to say that the event is all about adults gathering, he said. The cow bounce, various games, Penelope the Clown and pony rides by Ernie Guerin kept the cheerful children busy throughout the day.

"There's something to do for the whole family," he said.

McBrayer said attendance has been increasing over the years, and this is due in part to the addition of a huge craft sale.

Bonnie Saltus, who organized the sale, said she has seen an increase in people's desire to sell crafts. One contributing factor, she said, is that the economy has many people looking to make homemade crafts to supplement their income.

With events like this, people can use that creativity to make some extra money, she said.

"It means a lot to Peru," Saltus said about Applefest, "because it's a small community, and we don't have a lot of events."

As for the food, some people — including Saltus — claim that apple fritters are the best snack at the festival.

"You don't have time to take a break," said Sally Kokes, who has been a part of Applefest since its inception and has been making apple fritters for 20 years.

Peru is apple country, she said, and apple fritters are an important part of what makes the festival great. Not only that, Kokes said, they are an Applefest secret.

"I don't know any other place that sells apple fritters."

Deanna Snyder, who has worked with her mom for nine years planning entertainment for the event, said the live music is a major draw.

On Saturday, a gospel choir, the Back Porch Band and Bright Brothers performed with Jim's Tunes taking over the disc-jockey work between sets.

"A lot of people I find come out for the entertainment," Snyder said.

Sandi Andrews, who handles advertising for the event, said the sense of camaraderie is just like what you would have expected at fairs long ago. For instance, people get to mill about and see people they might not see again until after winter, she said.

As for her favorite aspect of Applefest, being able to help raise funds for the church is most important.

"I enjoy working," she said.

Because of state law, the liquor wheel and poker tables, which were once a part of the festivities, had to be abandoned, she said.

"Of course, the guys like the beer," she said.

Whether it's the music, games or food that brought you there, Snyder said the community was out in force, and everyone seemed to have an especially friendly attitude and smiles on their faces.

"It's the whole thing," she said. "It's all (about) people helping the church."