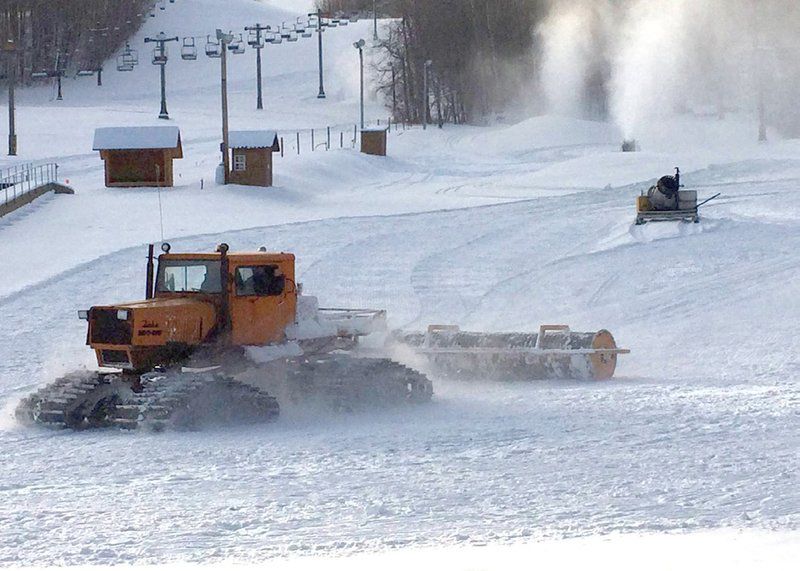 PHOTO PROVIDEDA Tucker Sno-Cat pulls a roller to help pack down the snow at Titus Mountain last year. Titus officials said they do this annually to ensure the slopes have a good and solid base for the whole season. Behind the Sno-Cat is a snow gun making snow for the ski area’s bunny hill. 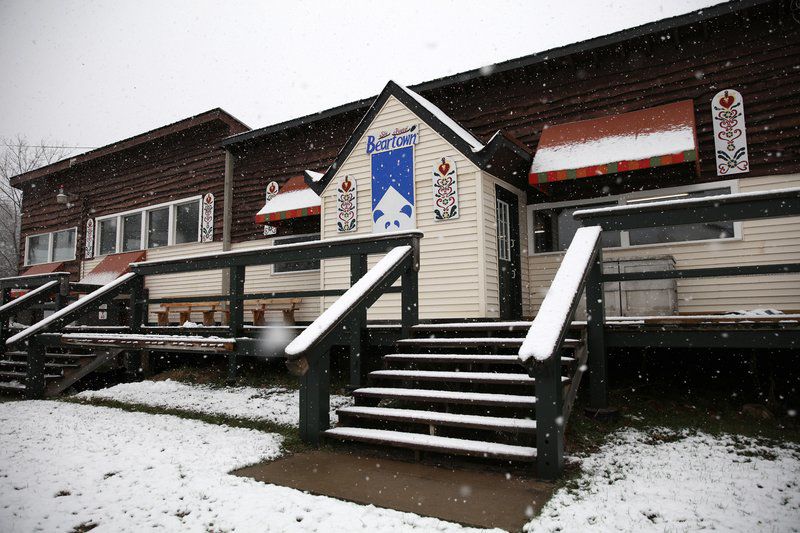 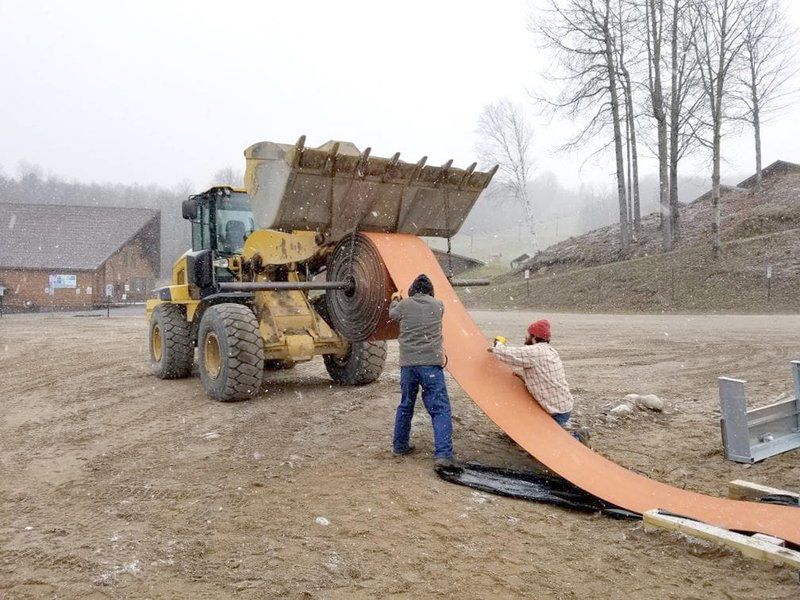 PHOTO PROVIDEDTwo workers at Titus Mountain unravel a 550 foot conveyor lift on the Malone-based ski area’s new tubing hill. Though in its same location, the mountain’s tubing hill has been revamped for the 2019 season, including the new conveyor lift and a steeper drop. 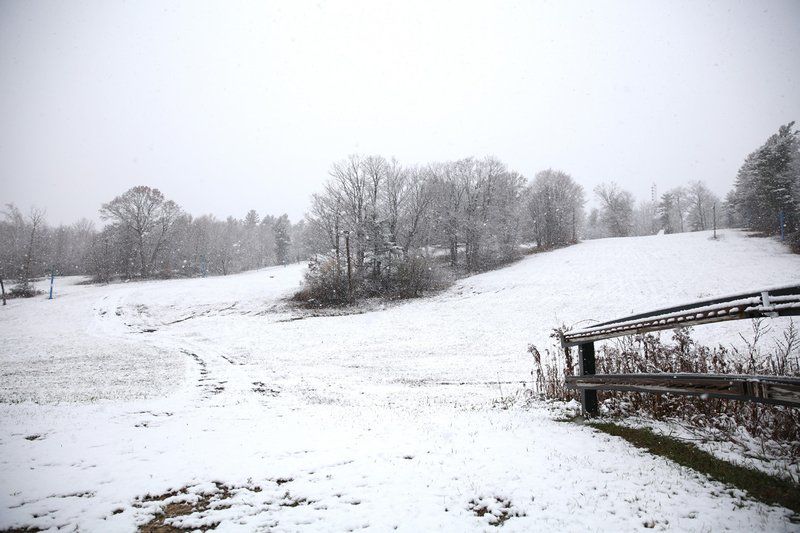 Recent snow blankets the ski and snowboard trails at Beartown.

PHOTO PROVIDEDA Tucker Sno-Cat pulls a roller to help pack down the snow at Titus Mountain last year. Titus officials said they do this annually to ensure the slopes have a good and solid base for the whole season. Behind the Sno-Cat is a snow gun making snow for the ski area’s bunny hill.

PHOTO PROVIDEDTwo workers at Titus Mountain unravel a 550 foot conveyor lift on the Malone-based ski area’s new tubing hill. Though in its same location, the mountain’s tubing hill has been revamped for the 2019 season, including the new conveyor lift and a steeper drop.

Recent snow blankets the ski and snowboard trails at Beartown.

Beartown Ski Area Inc. Head Coach Mike Collin said the not-for-profit ski area in the Town of Beekmantown has a month or more before its lifts are up and running.

"Last year, we opened on Dec. 12, which was the earliest ever," Collin said. "We base it on snow levels and if it's going to stay cold. Typically we don't open until Christmas time."

As for an expected 2019-20 season opening day, the coach said it was too soon to tell.

"I would say about six inches of snow would be good for opening," he said. "The whole hill is all grass, so it doesn't take a lot to cover it up."

Some snow flurries on Thursday morning had left a light blanket up on the Beartown slopes and Collin hoped that would build up in coming weeks.

Beartown Ski Area, known locally for its kid-friendly recreation, operates via a board of directors and was founded back in 1957.

Visitors of the 140 acres can pay to access its down-hill ski and snowboard slopes, tubing hill, five miles of cross country ski trails or rent out the onsite lodge for private parties.

Collin, who coaches kids for the Beartown Ski Team, said his father Malcolm was of the ski area's original founders.

Once a superintendent at Plattsburgh-based construction group Luck Brothers Inc., Collin's 2016 retirement freed up more of his time, which he has dedicated to the slope's year-round maintenance.

"Beartown is sort of a passion for me," he said, adding that it was for his father, as well. "I'm just carrying the torch on."

That has included mowing trails, splitting firewood and the lodge's recent kitchen remodel.

But Collin doesn't always work solo, the family ski area has about 20 to 25 volunteers who lend a hand, too.

"We just get together and have work days on the weekends to keep the place the going," he said.

Since the start of fall, Beartown has already hosted three of those work days.

"Now we'll have one every weekend until we open," Collin said. "As long as the community and the people in the area support Beartown, we'll keep it going.

"It's a lot of work, but we all love it and when you see the smiles on the kids's faces each winter — it's wonderful."

Also readying for the winter sport's season was Titus Mountain on Johnson Road in Malone.

After the snowfall on Thursday, officials of that North Country ski area had reported four to six inches of snow covering its 50 trails and glades.

Co-Owner Chris Monette said the Titus ski area preferred a snow base of about two feet before opening.

"Last year we were open the Friday and Saturday after Thanksgiving," Monette said, adding that he hoped the same for the 2019 season. "If we can get the snow — absolutely.

Monette said Titus Mountain began its preparation around Oct. 1, which has included checking the ski trails for any obstructions.

"We have people go around and check for any down trees or anything like that," he said. "We try to do that before snowfall, because then it's tough to work on them."

"Basically, you fill each chair with a container that holds about 25 gallons of water," he explained, adding that it checks the lift's gears, braking and auxiliary motors.

"It's a simulation for if every chair was full," Monette said. "That way you know that even on a busy day, your lift can still maintain everything."

New at Titus this year will be a revamped tubing hill with a new 550 foot conveyor lift, as well as a nearby pizza and warming cabin.

"The tubing hill is in the same spot," Monette said. "We've just made it wider and then at the top it's steeper with a more gradual slope at the bottom."

With Mother Nature in charge, Monette said the seasonal business's biggest setback was the weather.

That's why the ski area has to make its own snow each year.

"We upgraded our snow making to make much better snow and it's a little better for the environment, as well," he said.

In years past, Titus used diesel-run machines, but recently made the switch to 20 electric-powered snow guns.

Monette said making snow was kind of funny, though, because it was still weather dependent.

"With the big diesel guns, it would have to be 15/20 degrees outside to be able to make snow," he said. "So you could only make it when it was cold."

With the new electric guns, he added, Titus would be able to make snow in temperatures as high as 28 degrees.

But in those higher temps, snow production would only average about two inches per hour.

"Whereas if it's 10 degrees outside," Monette said, "you could make one foot of snow per hour.

Beartown Ski Area has the ability to make snow using a diesel-run machine, but Collin said they hold out as long as possible before doing so.

"It's very costly to do it," he said. "We try not to do it too early where if spend all of the money to make it, then it just ends up melting."

For each day that ski area makes its own snow, it costs roughly $500.

"That's a lot of lift tickets to sell to make up for it," Collin said.

But if there isn't enough natural snow on the ground by winter vacation, the ski coach said Beartown starts pumping out the man-made flakes.

"At that time, we just decide that we want to be open for the kids at Christmas time and we'll do everything we can to make sure that there is snow on the hill," he said.

Monette said snow making was a costly feat for Titus, too, but thought it was worth it for that operation.

"With having 50 trails and trying to be on the bigger side of a smaller-scale mountain," he said, "you really have to make snow to get open."