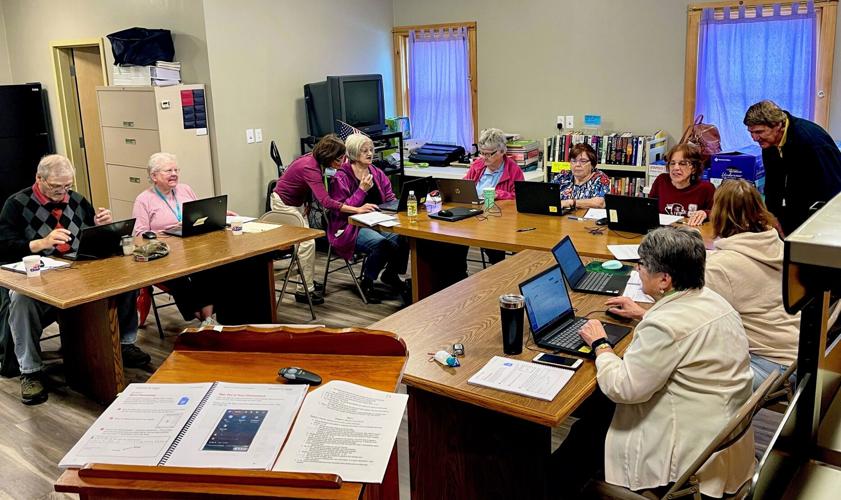 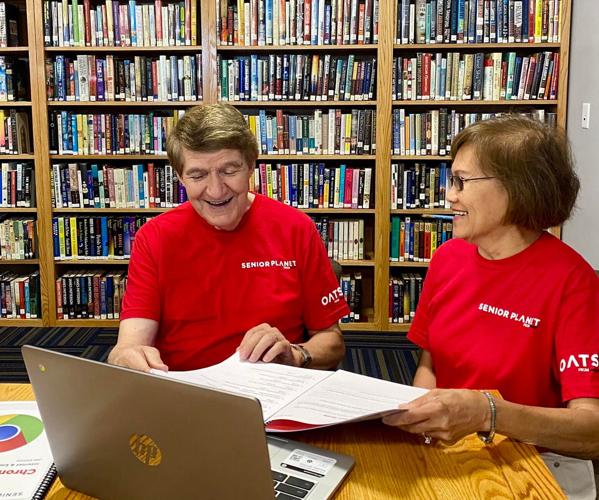 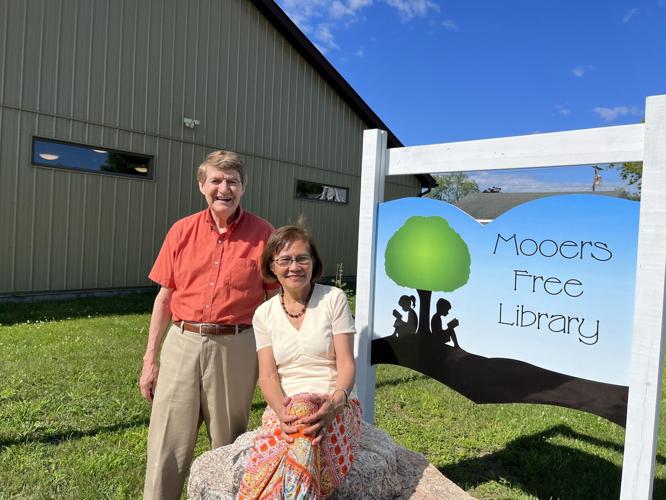 Art and Norma Menard pose outside of the Mooers Free Library where they teach Senior Planet technology programming to residents. Art is a retired math teacher from Northeastern Clinton Central School, and Norma is the a retired director of Literacy Volunteers of Clinton County. Art serves as the library’s treasurer, and Norma is one of three co-directors with Stacie Brooks and Lisa Delong.

Art and Norma Menard pose outside of the Mooers Free Library where they teach Senior Planet technology programming to residents. Art is a retired math teacher from Northeastern Clinton Central School, and Norma is the a retired director of Literacy Volunteers of Clinton County. Art serves as the library’s treasurer, and Norma is one of three co-directors with Stacie Brooks and Lisa Delong.

There, they teach seniors how to navigate devices and their lives and reduce social isolation in the digital age via Senior Planet’s licensing program.

Art taught math at Northeastern Clinton Central School, and Norma was the director of Literacy Volunteers of Clinton County

“In January, Norma, the co-director of the library, was sitting at the library computer and got an email that Senior Planet was interested in expanding into libraries,” said Art, who is the library’s treasurer.

“So, Norma immediately answers. She said yes. In January of 2020, we were walking the mall and Norma said, ‘Hey, let’s sign up for this Senior Planet course,’ and we did. We enjoyed it.”

The 47-year married couple were supposed to graduate in March.

“They have a little graduation ceremony at Senior Planet, but it never happened because of COVID,” Art said.

“We had almost completed the course. The following two years, we did so much online with Senior Planet. They had all kinds of free courses, lectures and workshops, etc. We did a lot including Zoom and so on.”

Mooers Free Library signed on for Senior Planet licensing structure, which works with community-based organizations to develop local trainers to deliver Senior Planet’s proprietary curriculum and bring Senior Planet’s world-class programs to older adults in their area, according to the agency’s website.

“They have a Zoom training program nationally with Senior Planet, and we did that in February and March,” Art said.

“By the end of March, we were certified trainers to teach the courses, lectures, and workshops for Senior Planet.”

“We are not the only library,” Art said.

“It’s a consortium for the whole North County, from Watertown to Rouses Point to Ticonderoga.”

Christi Sommerfeldt, regional services librarian for the Northern New York Library Network, is the administrator for the consortium.

“Each library alone would not have enough people,” Art said.

“The one at the mall in Plattsburgh did a lot. But each library would probably have one or two courses a year because the librarians have so much else to do unless they can get extra help. So, they’ve combined the whole Northern New York system. In Clinton, Essex and Franklin, it’s Mooers, Champlain, Rouses Point, Chazy and Willsboro. Five libraries have opted in so far, and they have people trained to do Senior Planet courses and workshops.”

There are 10 to 15 more libraries on board in St. Lawrence and Jefferson counties.

“The whole group together is doing that,” Art said.

“We’ve already done one course, Chrome Essentials, in May.”

“There are 10 sessions, and we did them in five weeks,” Norma said.

Fourteen participants are the maximum that Senior Planet recommends for courses.

“Because we need the devices,” Norma said.

“The person has to have a device. We actually give them a book and a manual.”

“They develop all the curriculum. In general, we follow it quite strictly.”

The Chromebooks were borrowed from Clinton-Essex-Franklin Library System, which is based in Plattsburgh.

“It’s the Digital Inclusion Program of the North Country, again, you know, from the Northern New York Library Network, who got the funding,” Norma said.

“Part of the funds were used to buy equipment, so that C-E-F has multiple devices of Chromebooks and also iPads. Some of the courses deal with iPads. So, we borrowed actually 15 devices, so all 14 enrollees would have a device plus one for the instructor.”

COVID once again impacted the course as some people dropped out.

“We ended up with eight who graduated and finished the five-week course,” Norma said.

The Clinton County Office for the Aging sent out a notice for grants for senior programming.

“Norma got the idea to try and combine the two in a sense,” Art said.

“We named it Technology Coffee & Conversations. We prepare drinks, snacks, coffee, tea if people want to come in early and hang around a little bit later to talk. They can do that. For the most part, they are mainly interested in the technology part of it. They really want to learn, but they do enjoy visiting. The group really gelled. and they like coming, and they want to do other things.”

The group has suggested other topics such as genealogy and gardening.

“I think Tim Gonyo is planning on inviting a speaker on genealogy, and we’re doing some gardening stuff sometime in August,” Norma said.

Are you concerned about the spread of polio?