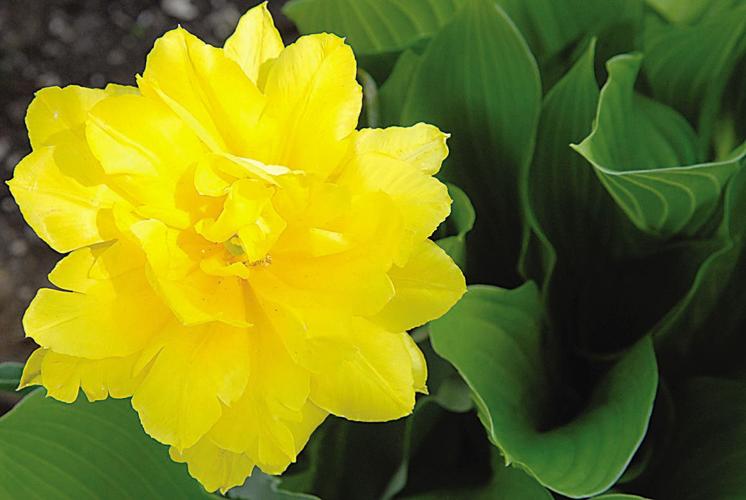 A tulip in full bloom beautifies the whimsical flower garden 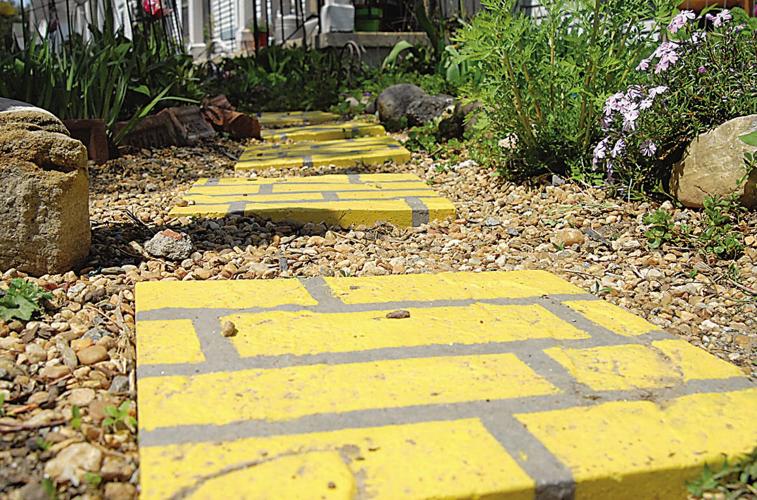 Stone blocks, painted to resemble a yellow brick road, accent Gibbons-s garden while guiding viewers on a foot-path through the flowering space 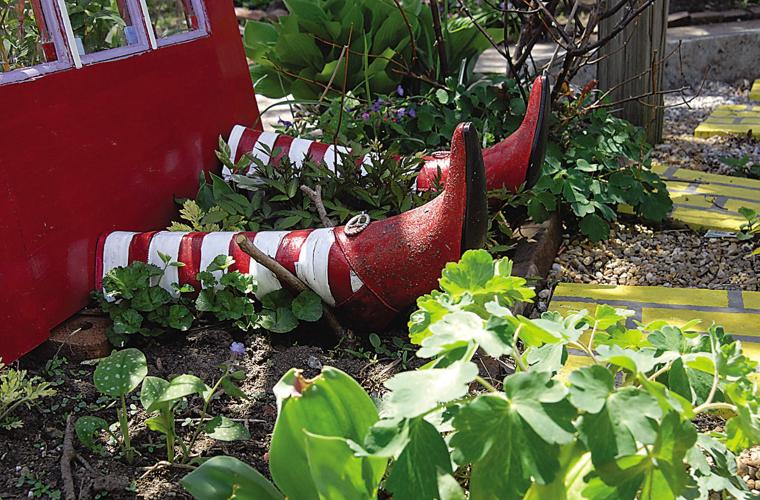 Prop feet, painted to portray a scene from the Wizard of Oz, rest beside a glass door amongst flowers in Gibbons-s garden 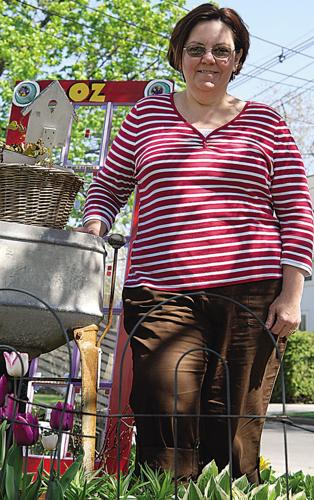 A tulip in full bloom beautifies the whimsical flower garden

Stone blocks, painted to resemble a yellow brick road, accent Gibbons-s garden while guiding viewers on a foot-path through the flowering space

Prop feet, painted to portray a scene from the Wizard of Oz, rest beside a glass door amongst flowers in Gibbons-s garden

PLATTSBURGH -- Judith Gibbons' city garden is a whimsical delight that includes a yellow brick road and ruby stilettos strategically placed beside a red door inscribed "Oz." The door was a cast off from a friend. Two glass Yankee candle covers, filled with crushed glass, glitter above purple-edged panes adorned with bits of tile. A small Yankee candle cover, also filled with crushed glass, serves as a door knob. The door, yellow concrete blocks and Wicked Witch footwear are new this year. A friend who works at the Fashion Exchange told Gibbons about the former black leather stiletto boots that were transformed into edgy ruby magic in the midst of tulips, hyacinths, hostas, Japanese maples and astilbes about to pop. "I tell you, it's therapy. I can spend thousands of dollars on analysis or I can do this and spend thousands of dollars on plants. Maybe it doesn't balance out fiscally." For years, Gibbons, family members and friends have exchanged plants. She originally received 15 small hostas from her mother-in-law. Over the years, she has dug up and separated plants until half of the North Country has Gibbons' hostas. She finds the perfect plant and garden ornament irresistible time and time again but she is a resourceful repurposer. Bricks salvaged from Plattsburgh Air Force Base edge her garden and are underfoot in cobbled pathways. Dog walks to Wilcox Dock have gifted driftwood used au naturel or as an unconventional deck gate. "I have to think about an idea until it talks to me. My best ideas come at two o'clock in the morning." Her mother's gardening first inspired her. From houseplants, Gibbons got into vegetable gardening with her three children. When they were no longer interested in picking sugar snap peas, she put in flower gardens. Pea gravel has replaced grass she's happy not to cut. Winters she works on projects that have included doors, headboards, chairs, tables or sheets of wood that she paints with vivid hues. The sun and moon are a common motif. When a son gave her an Adirondack chair, she purchased another and painted them both. Afterward, she splashed the deck with bold geometrics, predominantly red. She found the exterior paint among the customer-rejected hues at Lowes. Gibbons does a lot of container gardening. In a halved wooden barrel, she has cut off the ends of water bottles and poked a hole in the cap that is buried in the soil. When she fills the bottles with water, they will slowly irrigate the plants over a longer period of time. A former basketball court was transformed into a canopied mosaic paradise complete with bricked fire pit, potting-bench sideboard and wonderful views of Gibbons' imagination realized. Beside the deck, is a row of upended blue wine bottles edging a small patch holding "Rita's Plant," a Solomon's Seal that once belonged to the late Rita Banks, a dear friend. Gibbons' garden is filled with growing things and markers of the past such as her white metal high chair and decommissioned sap buckets from a friend's maple farm. The yellow brick road has been a hit with passers-by, especially children. "I would love a flying monkey," Gibbons said. rcaudell@pressrepublican.com