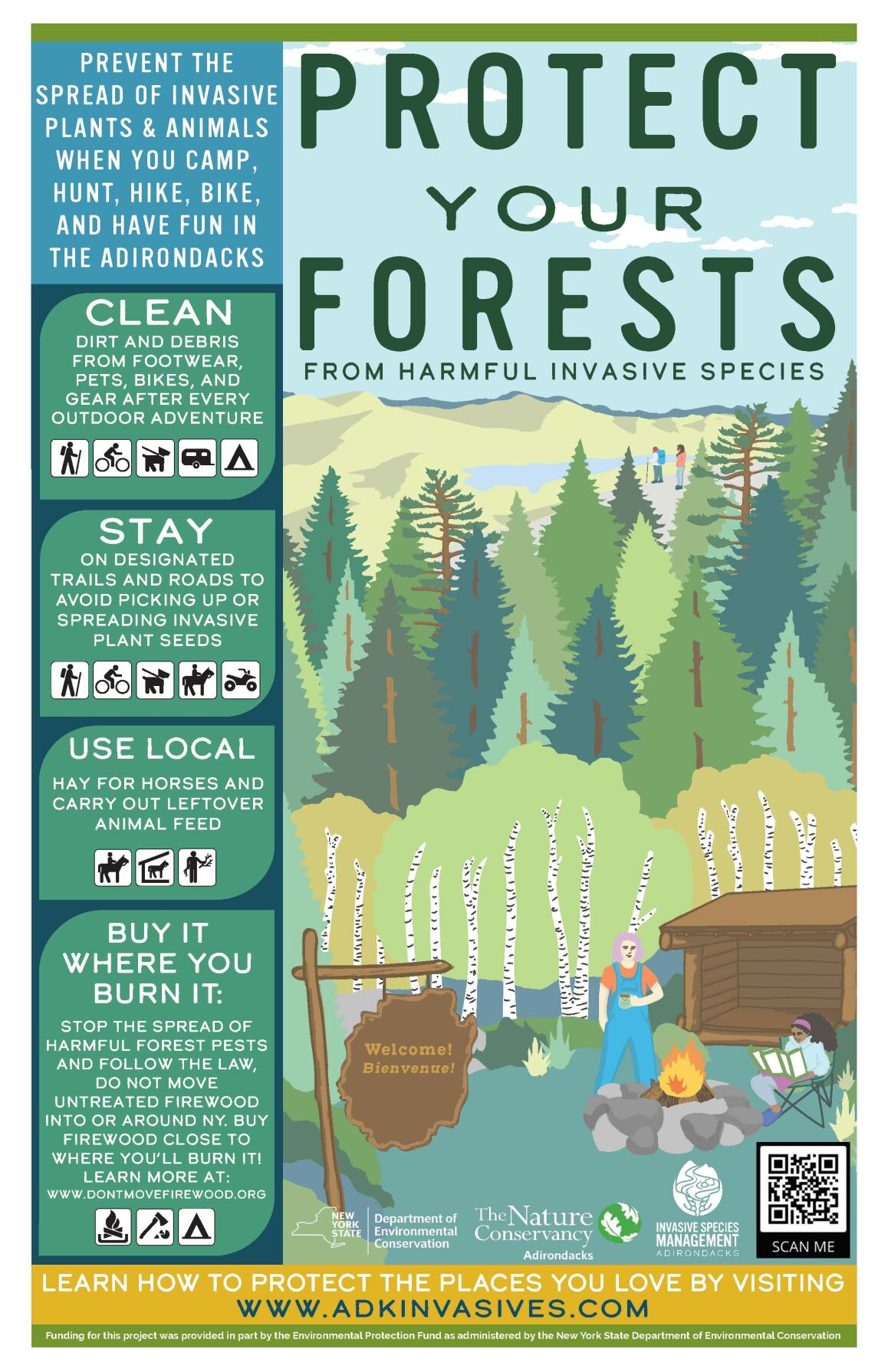 The Adirondack Park Invasive Plant Program will provide posters and brochures free of charge to any Adirondack nonprofit or business who wants to help get the word out, such as hotels and Airbnbs. 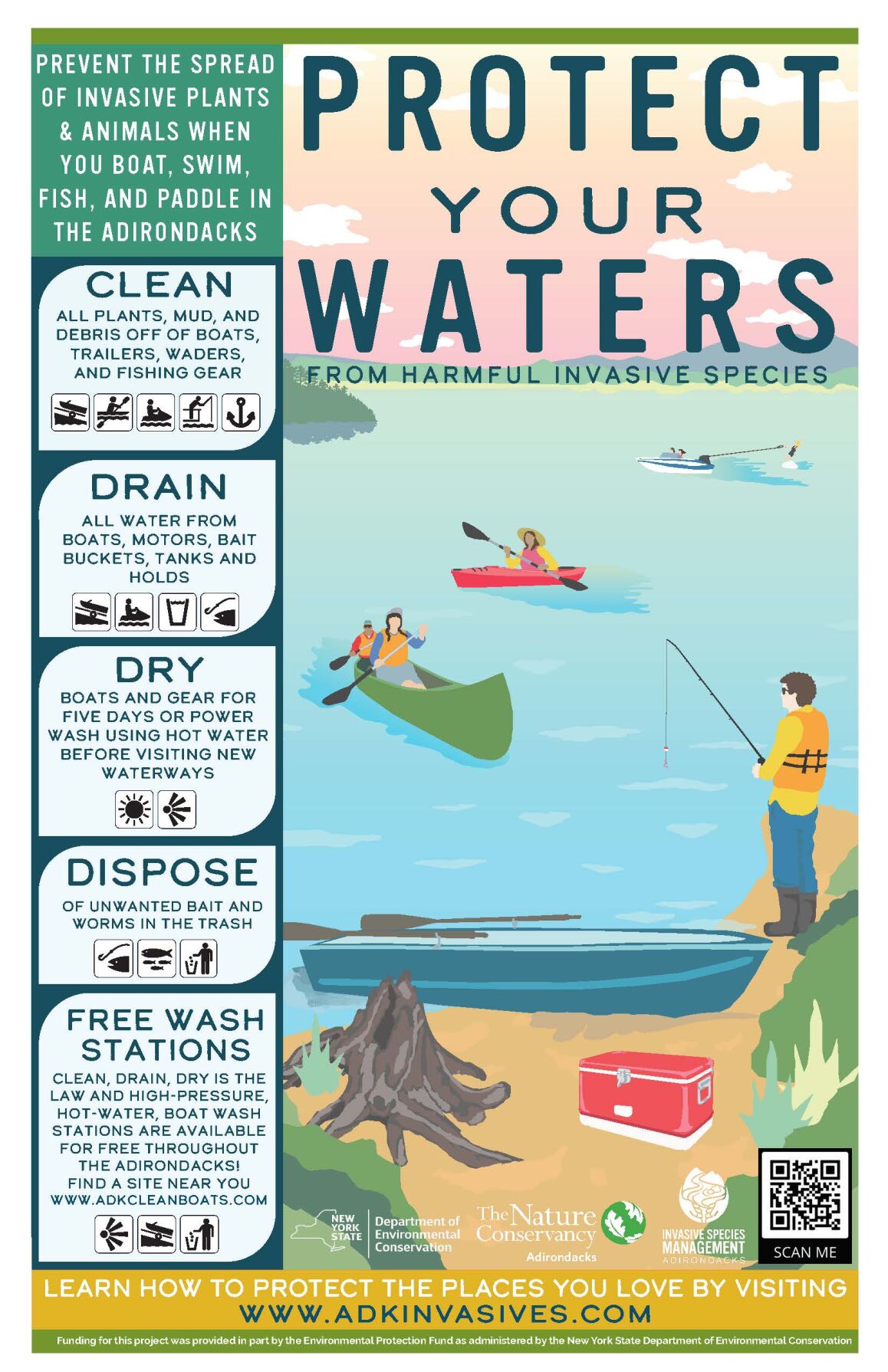 The Adirondack Park Invasive Plant Program will provide posters and brochures free of charge to any Adirondack nonprofit or business who wants to help get the word out, such as hotels and Airbnbs.

“It’s really an issue that brings everybody together.”

“We realize that there are a lot more visitors coming to the Adirondacks and a lot of people who live here who are just not that aware of the impacts that they can have on invasive species,” Van Ryn said.

For example, if she goes hiking in the Champlain Valley one weekend, then goes home and wants to do something in the Saranac Lakes Wild Forest, does she really have to clean her boots?

“And the answer is, yes you do, because there are a lot of different invasives over in the Champlain Valley that we don’t yet have here in the Saranac Lake area.

“We spend a lot of time talking about clean, drain and dry your boat, but sometimes we don’t talk as much about clean your boots, clean your other gear, clean the tips of your hiking poles when you move from place to place.”

APIPP will provide posters and brochures free of charge to any Adirondack nonprofit or business who wants to help get the word out, Van Ryn said, giving as examples hotels and Airbnbs.

APIPP is also putting out “Buy It Where You Burn It: Don’t Move Firewood” posters and rack cards in order to help prevent the spread of species like emerald ash borer, an insect whose primary mode of getting around is in firewood.

“It is always best to buy your firewood locally, or … you can get heat treated firewood at many of our convenience stores and that’s really the safest way to go with firewood,” Van Ryn said.

Van Ryn said there has been a significant shift in invasive species concerns in the Adirondacks over the last year.

For example, the first occurrences of emerald ash borer — which can kill ash trees within two to three years of infesting them — within the park were identified last year in Warren County, specifically in the Schroon River area.

Outside the park regions, the insect was also identified for the first time in northern Clinton County, Van Ryn said.

“So it’s really kind of closing in on us from multiple directions now and that’s of concern not just for commercial ash trees, but the ash trees (that) often are in our riparian areas.”

“So if we lose those ash trees, that’s going … to really impact those species that move along those river corridors. Also … black ash in particular is one that our Native American friends use for basketry and also for some native crafts, so (the ash borer is) indiscriminate which ash trees it infests.”

This summer, people will see sticky traps up in trees that are intended to draw insects to them and help figure out where the emerald ash borer is moving, Van Ryn said.

Though the main infestation has been knocked out, Van Ryn said, other satellite infestations have since been identified.

She added that, while she had always heard it was too cold for the adelgid to survive much in Adirondack winters, this past winter wasn’t as cold.

The hemlock woolly adelgid was first found in Lake George at a campground by a camper familiar with the species who uploaded a photo to the state’s iMapInvasives network, Van Ryn said.

Those not familiar with that program who believe they may have spotted a new invasive can send good-quality photos to APIPP via adkinvasives.com.

“We only have so many eyes and ears on the ground, and so we really rely on people who enjoy the outdoors being out there and finding things for us,” Van Ryn said.

Though the emerald ash borer and hemlock woolly adelgid occurrences are not a direct result of the COVID surge of domestic travel to the park, as they were seen in surrounding area for two or more years, concerns about other invasives linked to an influx of visitors remain.

For example, on APIPP’s radar is hydrilla, a potentially destructive aquatic invasive found in the Connecticut River that flows through New England, Van Ryn said.

And the spotted lanternfly, which is pervasive in Pennsylvania and was found on Staten Island last year, can quickly become a serious pest,

“Spotted lanternfly, particularly if it gets up into our Champlain Valley, it is something that will basically devastate orchards, devastate wineries,” Van Ryn said.

“It is really a particularly agricultural pest but can also impact our forests, and we won’t know it.”

She noted that the lanternfly is not too discriminate and, instead of laying egg sacs on the side of a tree, may lay them on the under side of a tent trailer, making travelers inadvertent transporters.

“We can take action when it’s a small infestation, it’s when it gets bigger or undetected for a long time that it becomes problematic,” Van Ryn said.

She added that about 75 percent of the waterways APIPP has surveyed are free of aquatic invasives, and pointed to successful efforts to manage and, at times, eradicate common reed grass infestations.

“So we’re really fortunate here. We live in a really remarkable place and we can help keep it that way.”