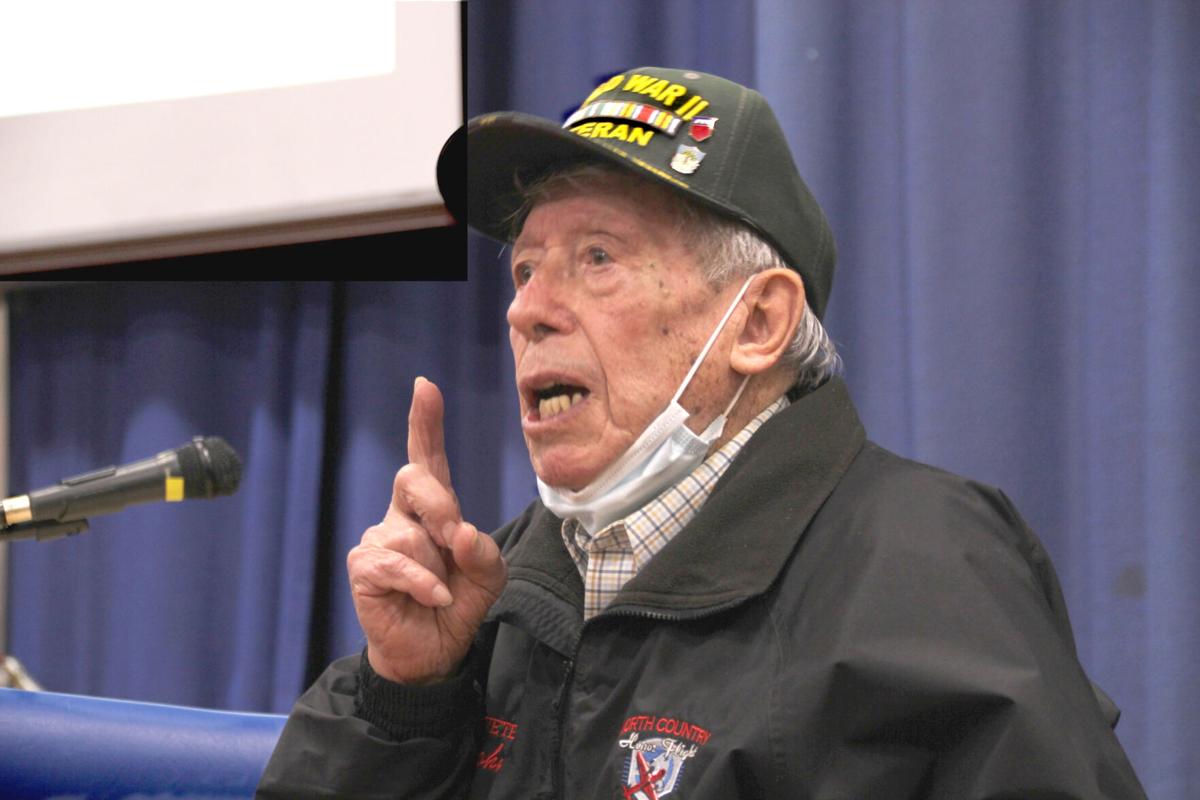 John A. Neggia, a 95-year-old World War II veteran, speaks to third through fifth graders at Boquet Valley Central School during a recent visit. Though the events of the war took place three-quarters of a century ago, “I think about it every day,” said Neggia, a former U.S. Army infantryman. With a clear mind, and at times showing emotion, Neggia recounted what transpired during deployment and on the battlefield. 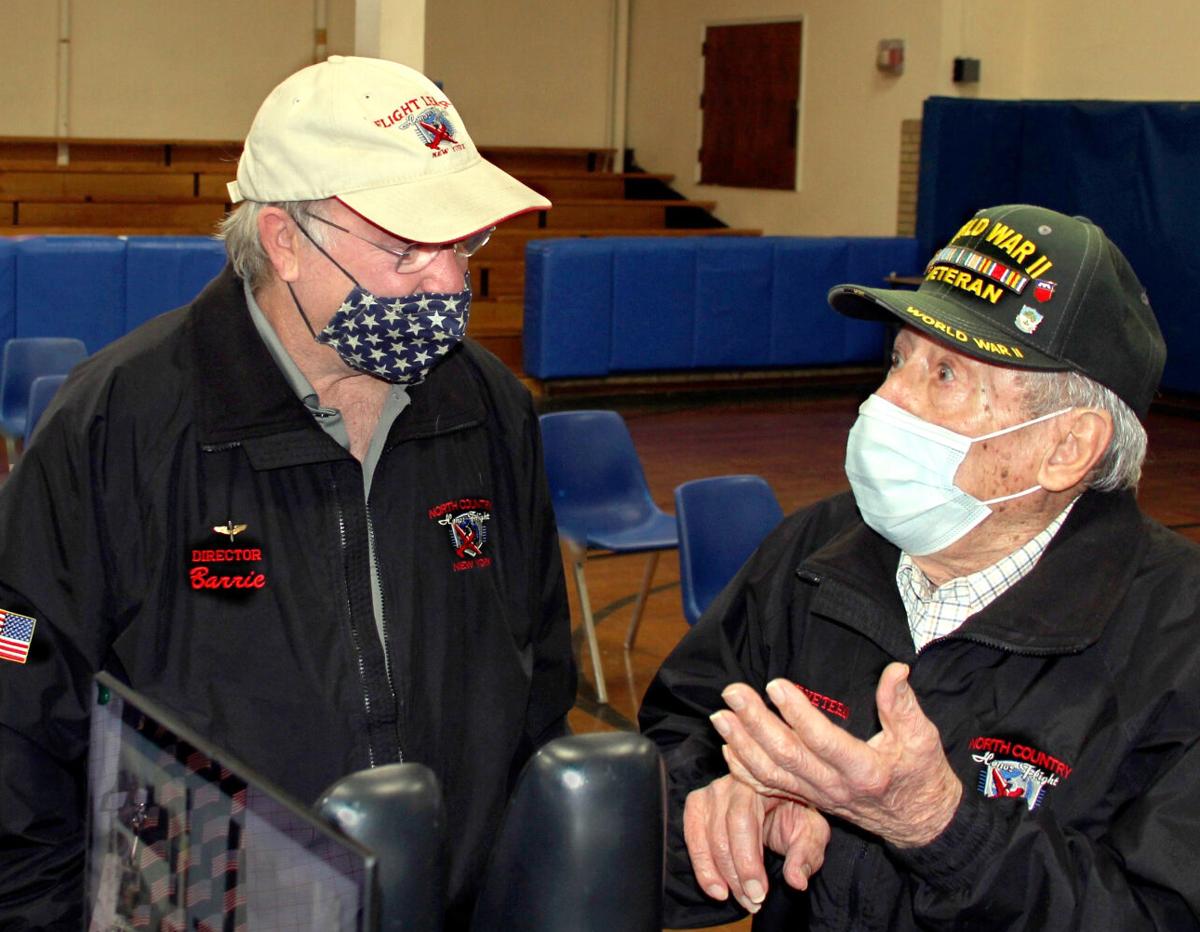 John A. Neggia, a 95-year-old World War II veteran, speaks to third through fifth graders at Boquet Valley Central School during a recent visit. Though the events of the war took place three-quarters of a century ago, “I think about it every day,” said Neggia, a former U.S. Army infantryman. With a clear mind, and at times showing emotion, Neggia recounted what transpired during deployment and on the battlefield.

Though the events took place three-quarters of a century ago, “I think about it every day,” said Neggia, a former U.S. Army infantryman. With a clear mind, and at times showing emotion, Neggia recounted what transpired during deployment and on the battlefield.

Transported across the Atlantic on what had once been a pleasure ship intended to hold 500 passengers, the SS Brazil was converted to bunk over 4,000 troops.

“They had us stacked on hammocks five high below deck. The smell was so bad with the men getting seasick, I grabbed a blanket and slept on the deck except when a storm hit and you could not see the ships near you because of the giant waves. When we ate we had to stand at a counter holding on to our food as the ship rolled.”

Landing in Le Havre, France, was not a vacation on a sunny beach. Normally, the soldiers each carried half of a pup tent which was designed to house two.

“It was so cold that four of us would be in a tent for warmth and we wiggled our toes all night to prevent frostbite. We were so thankful when we found a cow barn for warmth,” recounted Neggia.

As part of his presentation, photos taken by Neggia were explained, including those of fellow soldiers of whom he clearly remembered their names. Asked about contact with these and other veterans, Neggia sadly informed the youngsters: “After the war we had reunions. The last was in 2007. Many came with wheelchairs and canes. They have all passed away. I don’t know of any alive anymore. I hate to say it, they are gone.”

As for training, Neggia referred to his comrades as, “kids.” He was thankful for the instructors who taught them to, “take orders and do whatever they told you to do to save your life.” He told the students to be grateful for their teachers and others and that someday they would look back and be thankful for them.

'A SHERMAN TANK SAVED MY LIFE'

Neggia spoke of wading across small rivers and streams.

“This was scary as I couldn’t swim. When we got to the other side we would remove our clothes, wring them out and put them back on. We only had one set of clothes.”

Then there was the arduous task of making their way though Belgium and crossing the Siegfried Line while capturing the pill boxes which were cement fortifications.

“My lieutenant asked me take the point in an open field. They (the Germans) opened up and I fell to the ground with my helmet going one way and my rifle the other. There were the screaming meemies, which were rockets that made that sound flying over me. I lay there for the longest time which seemed like forever, until I heard the ground rumble. It was a Sherman tank which swung around and let me climb on to the turret.”

“Was I scared? Let me tell you. There were times we would fall asleep standing up in the foxholes freezing. Then you would hear something in front of you and the hair in the back of your head would stand up. I am not ashamed to admit that to you.”

Neggia also expounded on the liberties and protections the United States experiences today. In concluding, Neggia said, “All I want to say to you young, beautiful children, is that I am proud to have served my country so that you are free today. Listen to your instructors. They are planning for your future, and above all, say ‘thank you’ to them.”

Last year, in addition to the regular graduation of 24 BVCS high school seniors which included his great-granddaughter, Maggie Ploufe, Neggia received a high school diploma. This was through the NYS Operation Recognition Program which recognizes the devotion and sacrifice of Veterans discharged under honorable conditions that left school early.

North Country Honor Flight (NCHF) Director Barrie Finnegan informed the students and staff about the organization which has flown 525 Veterans, including Loggia, since 2013 to Washington, D.C. to see the memorials honoring those who served.

Finnegan also encouraged the audience to go to Plattsburgh when there is an Honor Flight scheduled to send the heroes off.