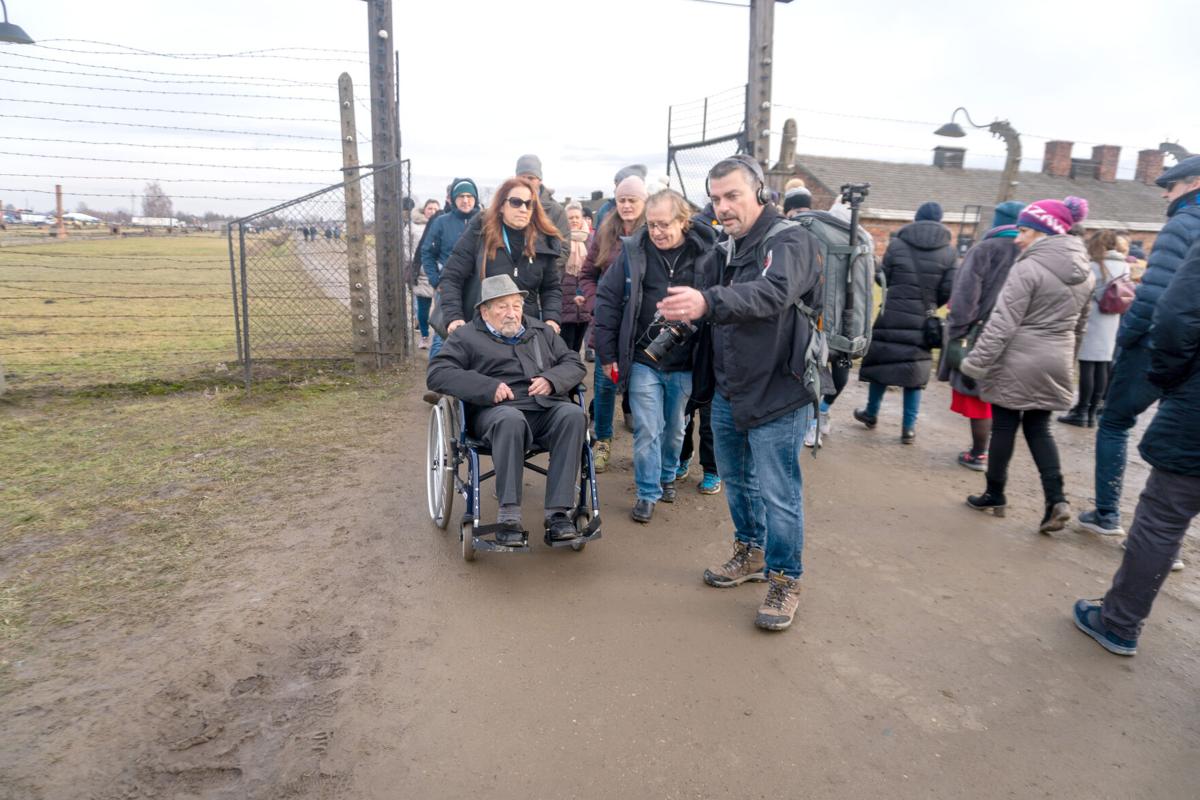 Behind the scenes in Poland, Paul Frederick (right) directs Julie Canepa pushing Vladimir Munk in wheelchair during filming of “Return to Auschwitz: The Survival of Vladimir Munk.” 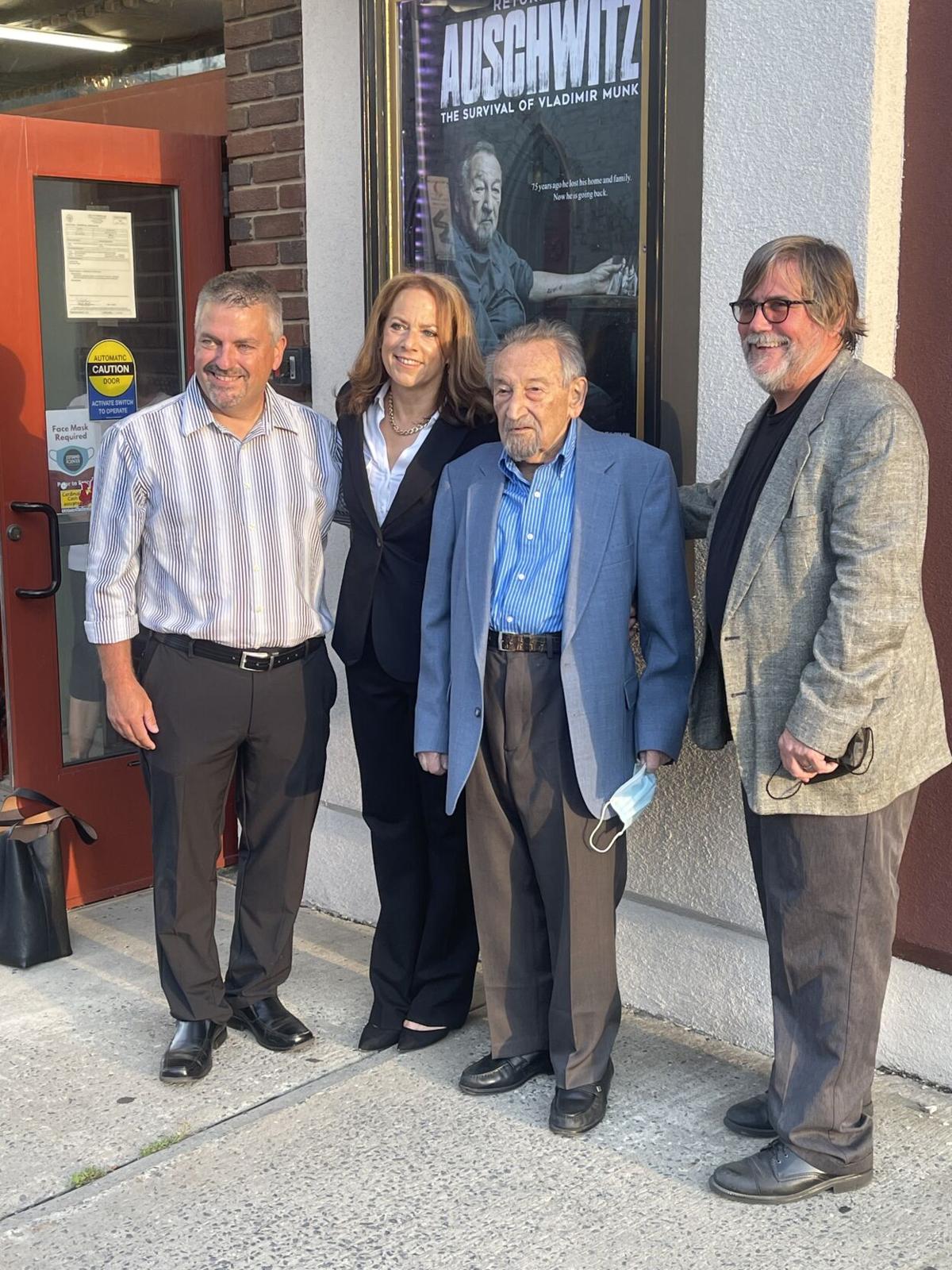 Co-producers Paul Frederick of Paul Frederick Productions (left), writer Julie Canepa, Vladimir Munk and Bruce Carlin of Carlin Media pose outside the Strand Theatre before last Saturday’s premiere of “Return to Auschwitz: The Survival of Vladimir Munk,” which recounts the Plattburgh resident’s January 2020 visit to Auschwitz-Birkenau where he and his father, Karel, were sent on October 1, 1944.

Behind the scenes in Poland, Paul Frederick (right) directs Julie Canepa pushing Vladimir Munk in wheelchair during filming of “Return to Auschwitz: The Survival of Vladimir Munk.”

Co-producers Paul Frederick of Paul Frederick Productions (left), writer Julie Canepa, Vladimir Munk and Bruce Carlin of Carlin Media pose outside the Strand Theatre before last Saturday’s premiere of “Return to Auschwitz: The Survival of Vladimir Munk,” which recounts the Plattburgh resident’s January 2020 visit to Auschwitz-Birkenau where he and his father, Karel, were sent on October 1, 1944.

The World War II-era history of these places is less abstract and more humanized to North Country residents after last Saturday's premiere of “Return to Auschwitz: The Survival of Vladimir Munk” at the Strand Theatre in Plattsburgh.

Those who missed it or those who must see it again can at 7 p.m. Friday at the Strand located at 25 Brinkerhoff St.

Vladimir, the 96-year-old star of the grassroots documentary, is a retired distinguished SUNY Plattsburgh professor of microbiology and resident of Lake Forest Senior Living Community here.

Through his lens and that of Julie Canepa, who accompanied Vladimir to the 75th anniversary of the liberation of Auschwitz Concentration and Extermination Camp in Poland in January 2020, the doc shows the arc of his life and his triumphant return to a haunting sacred ground.

“I realized young children now don't know anything about this period of time. For them, concentration camps and Auschwitz and the mass murder of Jews; it's something so abstract like the Civil War. It's old history. It's old history. I think this somehow makes it closer to them and makes it more human.”

Vladimir was born Feb. 27, 1925 to Karel and Hermina Munk in Pardubice, Czech Republic.

His father was a manager at an industrial distillery, and the young family's tranquil life went into a tailspin with German occupation in March 1939.

Julie and Vladimir became fast friends, and he started telling her of his past in Europe.

“I wanted to record his story for posterity,” Julie said.

“I begged Paul Frederick. I had no idea. I had no money. I had no way to pay him for his time. I felt really strongly that we needed to get something. I have the most utmost respect for Paul.”

Julie had seen Paul's documentary on William H. Miner and was impressed by it.

“We didn't even really know each other,” she said.

Paul came over to Vladimir's Lake Forest residence and set up all his equipment.

“I asked Vladimir a few questions, and once he was up and running, he talked for four hours,” Julie said.

“Paul left with four hours. Then, we just sat on it. There was nowhere else to go at that point. That was in February of 2019. ”

“It was super compelling,” Paul said.

“I instantly fall in love with the guy. We kind of put it on the back burner while she looked for funding.”

For The Sun, Julie wrote “Vladimir's Story,” a seven-part series, which appeared from May through September 2019.

“Every two weeks, it came out,” Julie said.

“Once it started, people got really hooked. And people were waiting for the next story to come out. They became really interested in him and his story.”

In the fall of 2019, Vladimir received an invitation to join a survivors' delegation by the Auschwitz-Birkenau Memorial Foundation.

“He sat on it for a little while and he was thinking about it,” Julie said.

“When he finally called, they said 'Oh, we're full.' He had asked me to go. I obviously had some trepidation about the whole thing. Then it was a non issue because it looked like we weren't going to go.

“Within another week or two, they contacted him and they said, This is happening. We have a spot for you. You're going to go.'”

The foundation paid for Vladimir and Julie's expenses as well as more than 100 other survivors and their companions to travel to Poland from countries all over the world – United States, Canada, Australia, Europe.

“There were supposed to be 120 survivors, but I think there were probably closer to a little over 100 who were actually able to make the trip,” she said.

“After that, it was just really all systems are go,” Julie said.

“The minute that we knew that we were going, obviously, I told Paul right away. He told Bruce, who is just very knowledgeable about World War II history and he also has a lot of production experience.”

“I said that's something we got to shoot. We have to do it at this point. I was going to need to go Pardubice, his hometown, and to Prague and would have to continue to travel around Europe while they only went to the event and came home. I said I'm going to need some help to do that. I enlisted the help of Bruce Carlin. He said, 'I'm in 100 percent.'

“I'm not sure he knew what he was getting into just at that point.”

“The promise was great,” Bruce said.

“It was a once in a lifetime chance to follow a survivor back and a chance to work on a project like this doesn't come very often. So I said, 'Yes, I will take a chance.'”

“Her house was in the bombing area in England where they would have to go to air raid shelters," he said.

"I grew up knowing about World War II and about the holocaust. I knew quite a bit about it, but I didn't know about Theresienstadt. I had no idea about the Czech Jews. I didn't know their particular story.”

The intrepid four traveled together from Montreal to Amsterdam.

“We were delayed out of Montreal because of a snowstorm,” Julie said.

“We supposed to fly from Amsterdam to Krakow, and we missed our flight. That added hours onto our trip. It added another plane ride and many, many more hours.

“Literally by the time we arrived in Poland, we had been traveling for almost 24 hours and that was a lot of Vladimir. And also, they lost our luggage.”

Vladimir and Julie attended a very formal day their first day in Poland.

“That was the day on the bus ride, we would hear so many stories," she said.

"We were spending all this time with other survivors and their families.”

One woman, a twin survived, and her sister, subjected to camp experiments, didn't.

“So many people around us were telling stories of such traumatic things that had happened to them,” Julie said.

“We heard of one woman who decided at the last minute that she couldn't make the trip. She was supposed to come from California.”

The woman's entire family was there waiting for her, and she decided not to come because she didn't think she could handle it.

“Her family was going to the camp by themselves to make sure that they saw where she had been so that they had that feeling of having been there,” Julie said.

“Of course, they could never know what she went through. Being there and getting the feel for that place, whether you have an attachment to it or not, it's a really life-changing experience.”

When Vladimir received his anniversary invitation, his thought this was a way of honoring his parents.

“Because he lost his parents there, and he lost over 30 family members he knows were murdered there,” Julie said.

“This was a really private like pilgrimage in that sense. He allowed us because of how strongly he feels the need for people to never forget and for people to understand there is a possibility that history can always repeat itself, he put aside his privacy in order to allow us to be there with him and follow him and document this journey.

One instance in Poland haunts them all from January 2020.

“It wasn't snow, but it was very muddy,” Paul said.

“At the end of our day with walking around with Vladimir, we looked down and our boots and shoes and everything was covered in this gray mud.

“We realized with as much ash that was coming out of the chimneys that that could be ashes of people that perished there. That night when you got back to the hotel and you're cleaning off your shoes, it all hit at once.”

Paul describes while filming and focus on getting the story as almost an out-of-body experience.

“You're working, and you're dialed in to doing that job,” he said.

“It was after that night when we got back, it sort of all registered what we had just experienced. It stayed with me for months. Months, I got to say it. It probably still is.

“It changes you forever going there. It really is that powerful when you realize a million and half people were put to death there. It's like hard to comprehend.”

Beyond the ruins of the gas chambers at Auschwitz is a memory that stays with Bruce.

“There was a group of maybe 100, it looked like Orthodox Jews that were in a dance, literally in a circle doing dances," he said.

"That moved me. It was just very moving.”

From this whole unfolding experience, Bruce has learned about the importance of persistence.

“Having the strong will to see something through, do everything you possibly can to reach that goal whatever it is,” he said.

“For us it was to get this stuff done, and then to get the website going so that we could do crowdfunding and let people know what we were doing.

“There was great support from the Plattsburgh community. We were able to cover our costs for the actual trip with that fundraising. Now, our goal is to get this on a worldwide, certainly national level. If PBS is the way, that would be one way.

“We want it internationally known because it's a story that any human being can learn from.”