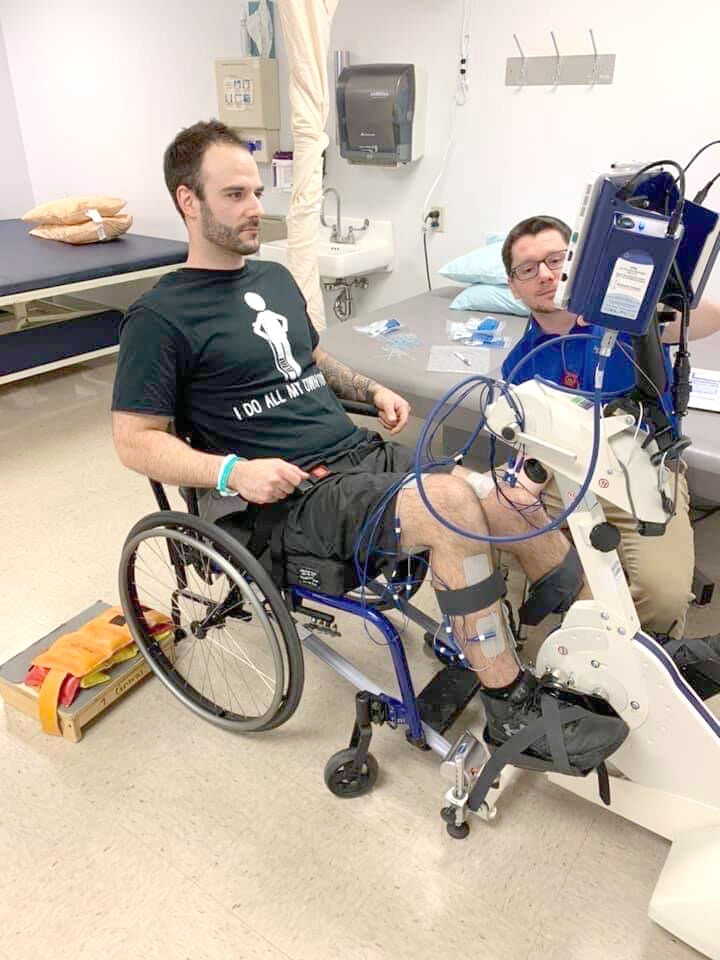 Since the February 2020 snowmobile crash that left him paralyzed from the waist down, Nick LaGoy has gotten into a routine and kept his mind occupied between his local businesses, physical therapy, and his new life. 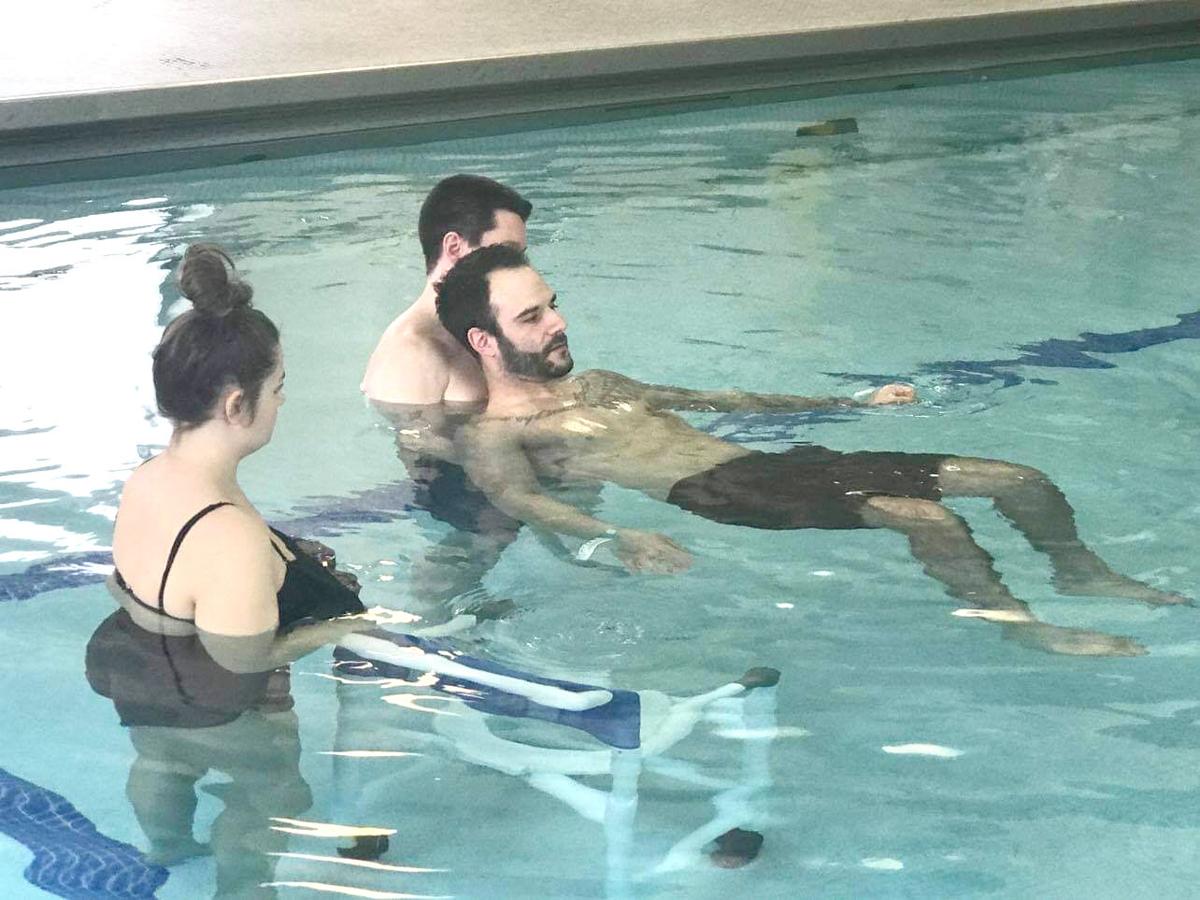 The part that Julie Rock, LaGoy’s physical therapist, has been impressed with the most is that since day one, she said, he was motivated and driven. “Attitude is a really important part of recovery no matter what your injury is,” Rock said. 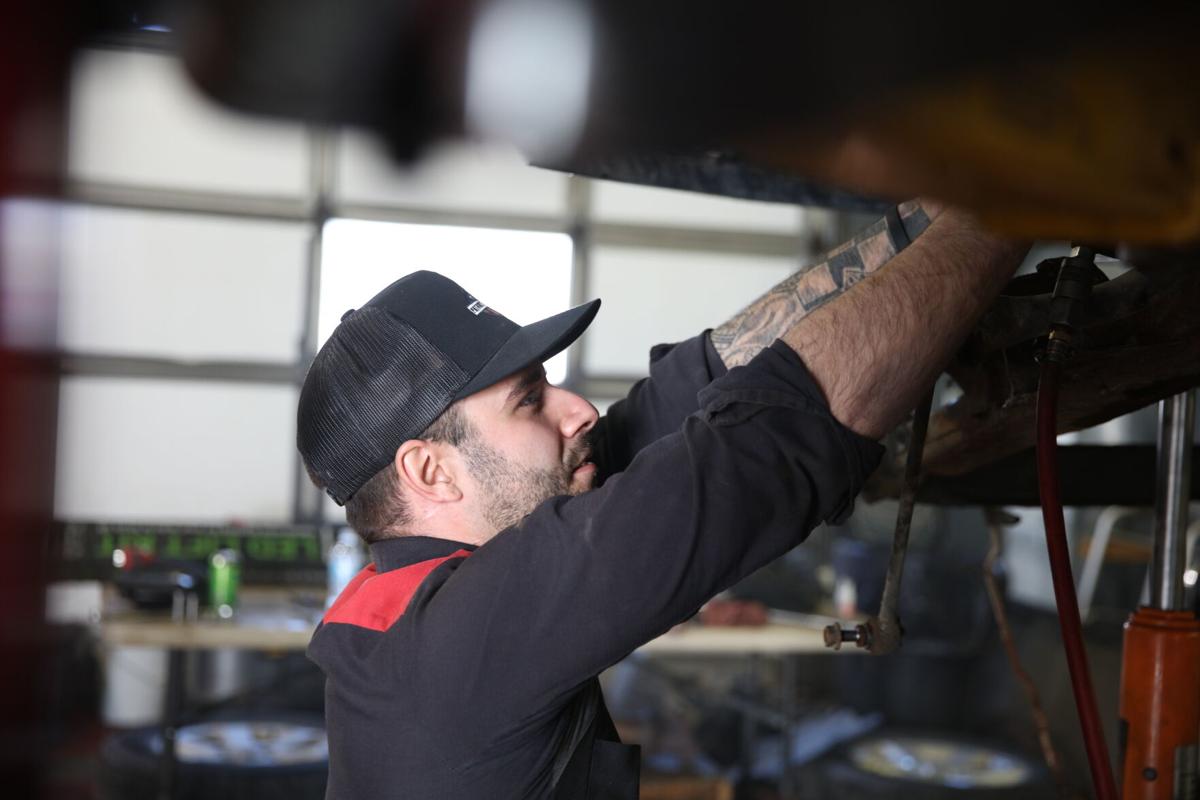 Since the February 2020 snowmobile crash that left him paralyzed from the waist down, Nick LaGoy has gotten into a routine and kept his mind occupied between his local businesses, physical therapy, and his new life.

The part that Julie Rock, LaGoy’s physical therapist, has been impressed with the most is that since day one, she said, he was motivated and driven. “Attitude is a really important part of recovery no matter what your injury is,” Rock said.

PLATTSBURGH — Nick LaGoy had no idea how bad it was until he was carried out on a stretcher with no feeling in his legs.

Just moments before, he was well on his way to win the Adirondack Cup, a snowmobile race he had tried to win for six years on the Booneville track his father and grandfather raced on before him.

But an encounter with Canadian racer Felipe Roy-Lalonde changed that in the final’s seventh lap of 12, when the two racers drove side by side, traveling at more than 100 mph. LaGoy was on the outside and Roy-Lalonde was on the inside of the track.

A third racer approached from behind, so Roy-Lalonde moved his sled to the right, colliding with LaGoy’s snowmobile and pinching it between his sled and the track’s outer wall.

Nick’s father and crew chief, Fred, watched it all as it developed. As a former racer, Fred has seen a lot of rough crashes. He’s even seen Nick in a couple of them. But this one was a bad one, and the crowd knew it too.

“It sounded like a cannon went off,” Fred said of the crash.

Nick woke up in a daze, slumped over and resting against a snowbank just inside of the track, with Fred standing over him. He was the first one to reach Nick, who was unconscious for a moment after the crash.

Nick, despite being in a hazardous crash, couldn’t help but feel a little sour about crashing this late in the final, but the situation suddenly became more real when he tried moving.

Adrenaline took over, and he just wanted to get up.

“Like I always did after every time I had a crash,” he said. This time was different though.

“I just remember trying to get up, and there was nothing there,” Nick said. “I couldn’t lean forward.”

STRAPPED TO THE BOARD

He was taken into an ambulance, which drove about 20 miles to meet a helicopter so Nick could get airlifted to Albany Medical Center.

“I didn’t think it was that bad until they started strapping me to that board, and that’s when I started to kind of freak out,” Nick said.

At that point, the pain was unbearable. “Like somebody had a knife in my back,” Nick said.

When he got to Albany Medical, the doctor told him he suffered an L2 broken vertebrae with bone pieces pushing into his spinal cord. He was paralyzed from the waist down.

He was prepped immediately for surgery. Surgeons cut Nick open 16 inches to reconstruct his vertebrae and remove the shards in his spinal cord. They replaced some of his spine with titanium rods with about 12 to 14 screws to hold it all together.

After the surgery, the surgeon told Nick his recovery would be a waiting game and that if it weren’t for his physical shape and the safety equipment he wore during the race, he wouldn’t have made it.

Feb. 2 marked one year since the crash. There are days when Nick doesn’t feel like it even happened. Others, he remembers every second like it was yesterday. Feb. 2 was one of those days.

Facebook memories flooded his notifications from posts one year before from concerned friends and family hoping and praying that he would be OK.

The day is still hard for him to talk about, but he’s come a long way since the crash. He can now stand and even walk for stretches at a time, do limited exercises, and do a lot of what he could do before.

After surgery, he thought about how quickly life would get back to normal. He thought about where he’d be two, three, six months after the operation and never thought he wouldn’t recover.

But as upbeat as he was about his recovery, it still presented plenty of physical and mental challenges, especially for someone as independent and self-reliant as Nick is.

It was tough for him to feel helpless, to have to rely on a nurse to sit him up, to take him to bathroom, to the shower and to shave his face.

Being self-reliant is a point of pride for him. He carries it with him everywhere, from his day-to-day life, to his two businesses that he owns and operates and especially to racing.

“A lot of times, it was just us,” Nick said about his racing team, which was often just him, Fred and sometimes one other person. “We were going against teams that have people on payroll, have tractor trailers and six or eight crew members.”

But then they would see Nick before races pushing his own snowmobile, doing the things crew members would normally handle.

“That’s where guys wouldn’t understand — when they have a half-a-million-dollar operation, and they can’t beat a guy from Morrisonville, New York,” Nick said with a chuckle.

Patti, Nick’s mother, said he was born with that attitude. She calls him “the $93,000 baby” because of how she was hospitalized for three months before she gave birth to Nick as a premature five-pound baby.

“He was fighting since day one,” she said.

But Nick would have to put aside his pride for his recovery. Bills were mounting while he was at Albany Medical, and his insurance just wouldn’t cover much of it.

Friends started a GoFundMe for Nick’s hospital bills. Within a day, he got an outpouring of support online.

The GoFundMe raised more than $30,000 from more than 391 donors. The money helped the LaGoys with hospital bills and travel costs.

“I just couldn’t really believe that the community would step up with $35,000,” he said, “to help me keep my doors open and keep my guys paid even just for a couple months.”

Nick stayed at Albany Medical for a week before being referred to Sunnyview Rehabilitation Hospital in Schenectady.

He stayed there for two and a half weeks for rehabilitation. They taught Nick how to get used to his new lifestyle and giving him life skills like how to transfer from a bed to a wheelchair.

They wanted to keep him there longer, but Nick, who ran his two businesses — LaGoy’s Automotive and Patriot Sanitation — from a laptop at his hospital bed, made the decision to find a physical therapist back home.

“That played a lot with my mind,” he said. “Is me staying here for another two weeks going to help me walk faster? Or can I go home and try to get back to a normal life and try to put this stuff in the past.”

EYES ON THE GOAL

Back home, he got in a routine and kept his mind occupied between his businesses, physical therapy, and his new life. Working to him is like a hobby, so being back home doing what he normally would do helped distract him from his situation.

“I feel like if I didn’t do that, then it would be more real,” he said.

The part that Julie Rock, his physical therapist, has been impressed with the most is that since day one, she said, Nick was motivated and driven.

“Attitude is a really important part of recovery no matter what your injury is,” Rock said. “You never know what you’re going to be like until you’re put into that situation. He was always upbeat, and he had a good sense of humor. He would laugh when I sometimes thought he might want to cry, and he would admit to having down days, but he rebounded well. He has eyes set on a goal.”

Nick started showing more improvement in early fall last year, when he noticed a burning sensation in his right leg at night. He even felt like it was twitching on its own.

He calls them tiny wins, but to his parents, they’re huge. He’s now reached a point in his recovery where every day feels like changes are happening all the time.

“It’s a hard thing to explain how appreciative I am of a lot of things now. Stuff I took for granted on a personal level like making coffee or putting your socks on — It just makes you realize how valuable every single second of every day is,” he said. “And when somebody does something for you how much it really means.”

Rock thinks with the dedication and work Nick has put in, he should make a full recovery. There still isn’t a timetable, but he’s ahead of schedule for someone facing the kind on injury he’s had, she said.

Nick is uncertain if he has a future in racing, but he wants to be involved in some way.

“Any kind of sport or activity that consumes your life, you really revolve your life around it,” he said. “But how do you love something that has put you into this situation? It made something you love and would do anything for and made it so you can never do it again.”

This is the first year in the last 15 where Nick hasn’t been on a snowmobile. He misses the people, the travel, the competition and the adrenaline that comes with racing.

As much as he would like to say he will get back on a sled, he doesn’t think that will ever happen. He feels like he could be a crew chief for a team or maybe a driver development coach in the future.

Ideally, he’d like to mentor a young driver to work one-on-one with.

“Even if I can’t be on a sled, maybe I can ride one vicariously through somebody else,” he said.

Either way, he said, he isn’t going away.

“I don’t want to be the guy who had some bad accident happen to him, and then he just went away,” Nick said. “That’s not going to be it.”

HOMER [mdash] Nicholas Henry Lines, 18, of Homer, passed away Feb. 18, 2021. Nicholas, "Nick" Lines was a loving son, brother, grandson, nephew and friend to all who knew him. He was loved beyond measure by all. His sparkling blue eyes won everyone over because they resonated the beautiful s…