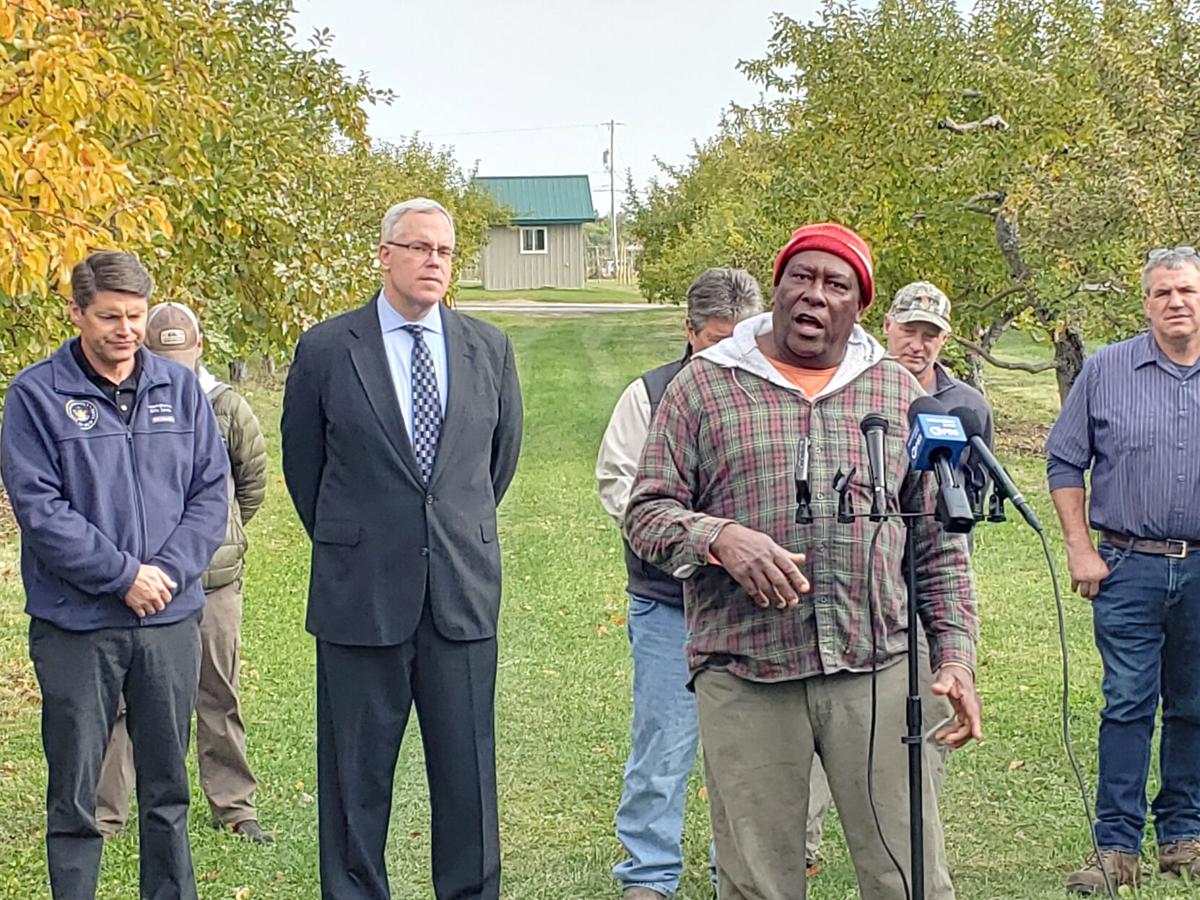 Paul Fisher, a Jamaican who has worked at Rulfs Orchard through the H-2A agricultural worker program for 27 years, joins farmers and politicians Tuesday morning to speak out against the possibility of lowering the overtime threshold for farmworkers from 60 to 40 hours per week. 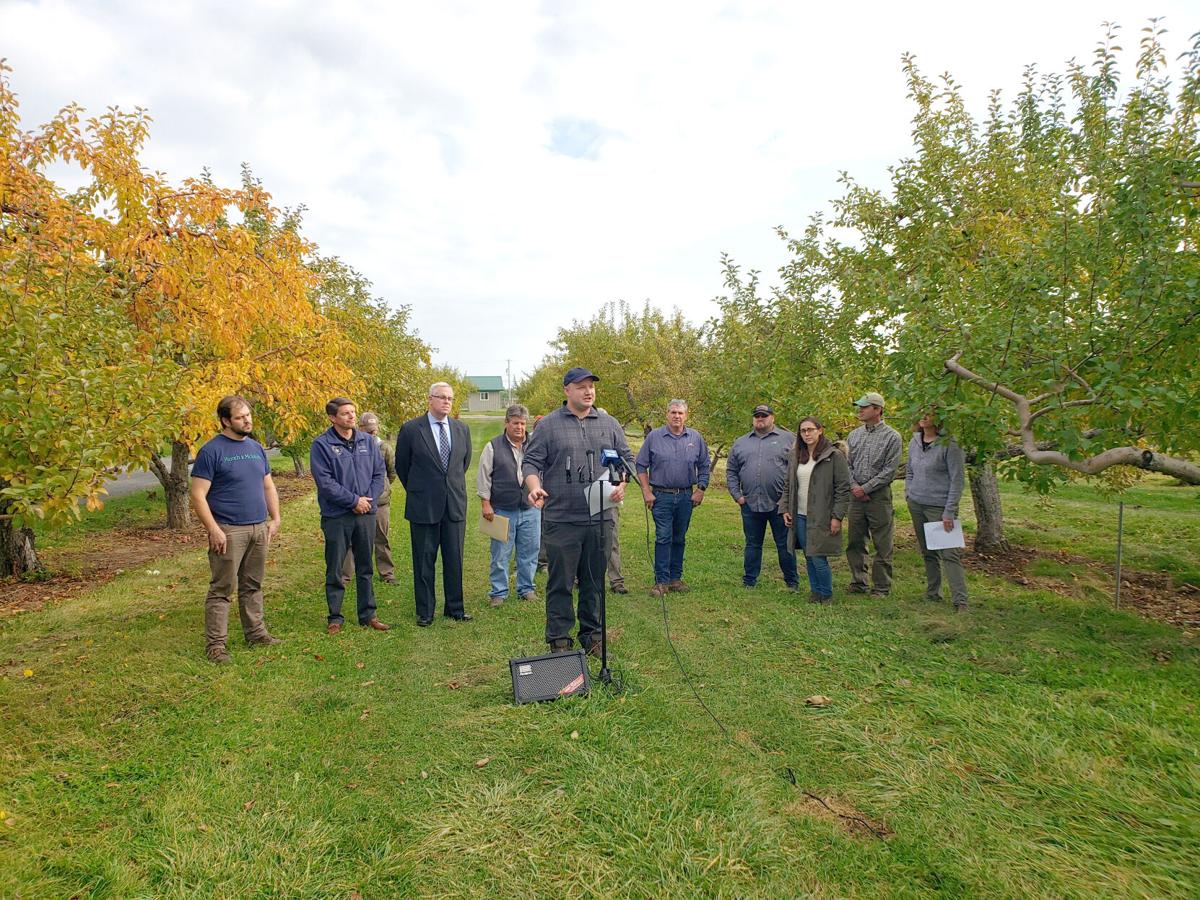 Flanked by politicians and fellow farmers, Jesse Mulbury, a third-generation apple farmer at Northern Orchard in Peru and New York Apple Association chair, argues that lowering the overtime threshold for farmworkers from 60 to 40 hours per week would be unaffordable for local farms and effectively end the H-2A guest worker program in New York State. The state Wage Board is expected to consider the adjustment later this year.

Paul Fisher, a Jamaican who has worked at Rulfs Orchard through the H-2A agricultural worker program for 27 years, joins farmers and politicians Tuesday morning to speak out against the possibility of lowering the overtime threshold for farmworkers from 60 to 40 hours per week.

Flanked by politicians and fellow farmers, Jesse Mulbury, a third-generation apple farmer at Northern Orchard in Peru and New York Apple Association chair, argues that lowering the overtime threshold for farmworkers from 60 to 40 hours per week would be unaffordable for local farms and effectively end the H-2A guest worker program in New York State. The state Wage Board is expected to consider the adjustment later this year.

PERU — Farmers and politicians gathered at Rulfs Orchard Tuesday morning to advocate for maintaining the 60-hour overtime threshold for farmworkers and voice concerns about how lowering it could make New York's producers less competitive in both the labor and commodities markets.

Later this year, the state Wage Board is slated to revisit the threshold set by the 2019 Farm Laborers Fair Labor Practices Act and determine whether it should be adjusted to 40 hours.

When Paul Fisher first started working at Rulfs Orchard 27 years ago, coming in as an H-2A agricultural worker from Jamaica, farmworkers did not qualify for overtime. That allowed him to work as many hours as necessary, and take a rest day when he needed it.

Now, with the 60-hour threshold, he has to take a rest day each week.

“When I go home back to Jamaica I go on vacation, so I don’t need any vacation here," he said. "I come here to work.”

Northeast Agribusiness and Feed Alliance Executive Director Rick Zimmerman told the Press-Republican after the press conference that farmers are required to pay their workers overtime for any hours worked on involuntary rest days. Since they are unwilling and unable to do so, farmworkers who want to work those days lose out, he explained.

Fisher said the 60-hour limit is already taking a toll on him; his sons, Claude and Damion, who also work at Rulfs Orchard; and their family back home.

Cutting that down to 40 hours would be a negative situation for them, he said, and that possibility has already led to discussions about seeking work in another state.

Jesse Mulbury, a third-generation apple farmer at Northern Orchard in Peru and New York Apple Association chair, said H-2A workers have a choice about which job requests they respond to, and where.

He argued that lowering the overtime threshold could threaten the very existence of the H-2A program in the state.

“When a guest worker is going to be choosing a state where they can make the most of their limited time, their seven or eight weeks in the country, or in New York, where they’re restricted to only 50 let alone 40 hours of work, they are going to choose to go to other states.”

Some of Northern Orchard's H-2A employees have returned for more than 37 years.

“They know that they can work the hours that they want to provide for their families," Mulbury said.

Adirondack Farms CFO Joanna Lidback shared statistics from a report by Farm Credit East, a lending institution that works with the agriculture industry, which showed that lowering the threshold would increase labor expenses by about 17% in New York State.

When added to the projected minimum wage increase, those costs are expected to go up by $264 million annually, or 42%.

Lidback noted that increased insurance costs related to workers' compensation and increased taxes were not reflected in the report.

“Cutting into the financial viability of a farm may cause some farms to make the unfortunate decision to cease operations and we all know that that could have a ripple effect in the farms’ communities, not just in terms of economics but also environmental," she said.

Todd Giroux, a third-generation dairy farmer in Beekmantown and president of the New York Farm Bureau’s Clinton County chapter, estimated that, between Clinton and Essex counties, seven dairy farms have shuttered over the last two months.

Adirondack Farms has been involved in retiring more than 20 farms as part of an Agri-Mark program that helps farmers who want or need to exit the agriculture industry, Adirondack Farms partner and co-owner Shane St. Cyr said.

"Agri-Mark probably had over 800 dairy producers two years ago; they’re under 700 now,” he added.

Jon Rulfs, owner of Rulfs Orchard and St. Cyr's partner at Adirondack Farms, noted that the farms had been around for multiple generations,

“The owners had tears in their eyes because they were the generation that gave up — they didn’t give up, they were forced out.”

WANT TO BE AROUND

Helen Giroux, a fourth-generation farmer from Chazy Orchards and Giroux’s Poultry Farm, said lowering the overtime threshold is a huge concern and would make her family think about how to do business differently in the years to come.

"We want to be around and we hope that we can at least stay at 60 here and figure something else out at the very least.”

Tony LaPierre of Rusty Creek Farm, a fifth-generation dairy farmer in Chazy, said it’s hard to put agriculture into a box with 40 or 50 hours a week when weather is involved. Lowering the threshold would force his farm to use technology to replace some laborers or hire more people.

"Which in itself is just impossible at this stage of the game," he continued. "I don’t know of any businesses out there, agriculture or not, that are not looking for employees.”

LEAVE IT TO FARMERS

Mulbury explained that prices for apples and other primary agricultural products are determined by grocery stores.

“We cannot simply raise the price of our product to meet these new challenges like the manufacturer of an iPhone or a new car can."

State Assemblyman D. Billy Jones (D-Chateaugay Lake), who was raised on and used to run a dairy farm, insisted that distributors will not look at produce and say they want to buy it simply because it’s from New York.

“They’re business people. They’re looking at the bottom line and a penny or two a product makes a big difference.”

His message to the Wage Board was to “keep it at 60” and not tie farmers’ hands any more.

State Sen. Dan Stec (R-Queensbury) said he does not believe Albany has studied the potential impact of lowering the overtime threshold, adding that farmworkers will ultimately vote with their feet.

“We are going to be chasing the people that are willing to do the difficult work of farming away to other states that don’t have this threshold.

"They are willing to work the longer hours to bring home a bigger paycheck."

Stec said the state is putting budget dollars into protecting and preserving farmland because it sees the value.

“The wage board’s on the cusp of sending the exact opposite message," he argued.

“This is absolutely the absolute wrong time to even consider making this change on top of everything else going on.”