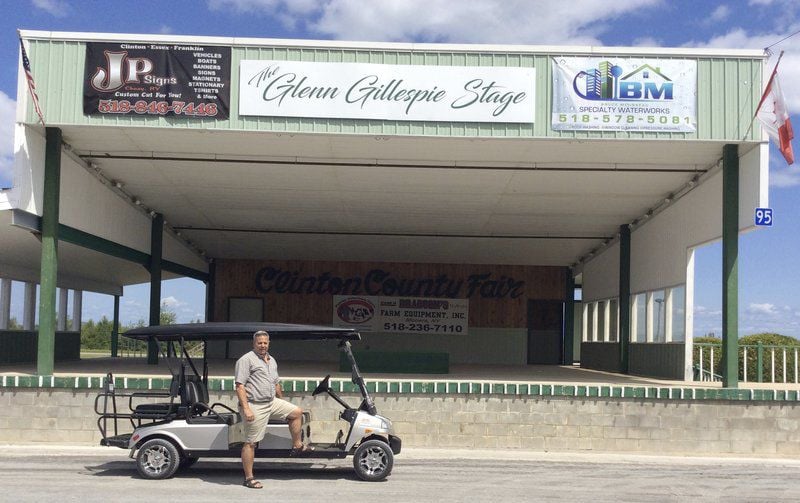 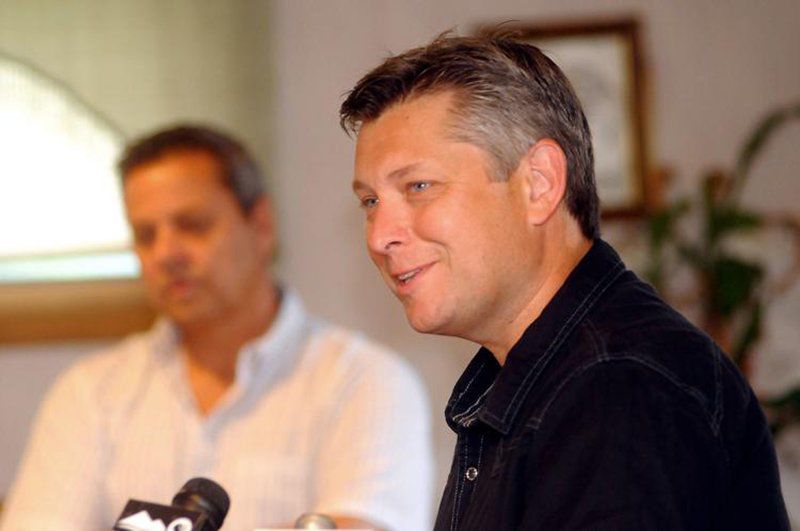 P-R FILE PHOTOEric Gibson of The Gibson Brothers expresses his excitement about being part of the first-annual Bluegrass Festival to be held at the Clinton County Fair Grounds in Morrisonville in 2012. In the background is Clinton County Fair Manager Glenn Gillespie. Looking back on two decades with the fair, Gillespie said he was happy he could help bring the festival to the fair. “It’s gotten bigger every year, so I’m happy about that, too,” he said.

P-R FILE PHOTOEric Gibson of The Gibson Brothers expresses his excitement about being part of the first-annual Bluegrass Festival to be held at the Clinton County Fair Grounds in Morrisonville in 2012. In the background is Clinton County Fair Manager Glenn Gillespie. Looking back on two decades with the fair, Gillespie said he was happy he could help bring the festival to the fair. “It’s gotten bigger every year, so I’m happy about that, too,” he said.

MORRISONVILLE — Caravans of vendors and campers streamed into the Clinton County Fairgrounds, and fair manager Glenn Gillespie was at the center of the flurry directing it all.

“I met so many good people and visited so many different fairs in New York state,” he said.

“I got so many good friends all over.”

HOW HE GOT THERE

He was wrapping up a 30-year career as a corrections officer at Clinton Correctional Facility in Dannemora when he was lassoed into the realm of cows, cotton candy and grand stands.

“The last few years at Dannemora, I worked at a furniture shop up there,” Gillespie said.

“Inmates used to make furniture and other stuff, and we would bring it down to the fair and then we would sell it.”

“They knew I was retiring from up there, they asked me if I would be interested,” he said.

“So the first year I went in as assistant manager, and the second year I went in as manager. That’s pretty much how I got roped into this because we were getting involved with the prison system bringing stuff down that the inmates sold. Then, they put a stop to that down the road.”

Gillespie was born in Watertown and lived up at Riverview most of his life.

He is a 1967 Saranac Central School alum, and dodged the Vietnam War because he didn’t pass the physical.

“Then after that I went to be a correctional officer. I started in 1970.

At that time, it was a good paying job.”

The shoe business was also a good gig.

He was assistant manager, and the franchise was going to offer him his own store.

“I had to make a decision, either go and get my own store or go to corrections and corrections had a retirement, even though I started at $7,800 a year,” Gillespie said.

“That was the starting pay back then for a corrections officer, believe it or not. Now, it’s changed but that’s what I started at, $7,800 when I started.”

As a child, he attended the fair and wished he could get involved somehow.

“In fact, when I was teenager, I did sell tickets at the carnival in one of those dinky little ticket booths for rides,” he said.

“I worked in there a few days. I always had an interest in it. So when they offered me the chance, I jumped to it.”

“We have a convention every year in Rochester. It’s a four-day convention with all 55 fairs in New York state. We pass around ideas.”

In 2008, Gillespie was promoted as president of all the state fairs.

“You climb the ladder,” he said.

Hate Spoils the Fun, is a Facebook group, that is lobbying for state fairs to prohibit vendor sales of Confederate flags and related merchandise at fairground events.

That is not the case at the Clinton Count Fair.

“Nobody has banned it at all,” Gillespie said.

“We have not banned any flags. I don’t even know if I have any Confederate flags taking place. I haven’t had any problems with it.”

He isn’t aware if any vendors at the fair sells the Confederate Battle Flag.

“Would I stop them from selling them?,” Gillespie said.

“No, I don’t think so. I know there is hard feelings or whatever about that but I haven’t had that problem.”

Since he is retiring, that will be a decision that incoming fair manager Michael Perrotte and the 24 member board will have to decide.

In his second retirement, Gillespie plans to stain his house and get caught up on other exterior projects.

He also plans to sit back and not have to make a decision.

“I don’t have to make a decision.”

He and his wife, Carol, snowbird it to Daytona.

The past two decades, he took his fair work with him.

“That’s when I pick up my daily acts I want for the fair the next year,” Gillespie said.

“I work on the grandstand acts. I’m in charge of pretty much everything, making sure they have their insurances to all the food vendors, every vendor you see here, every camper you see here. People don’t realize there’s like 125 campsites here, too. We have to book all those.”

Eight years ago, he started the Plattsburgh Bluegrass Festival at the fairgrounds.

“It’s gotten bigger every year, so I’m happy about that, too,” he said.

“Everybody was after me to get it started and I did. I’m so happy that I did.”

This year’s festival is slated for August 9 to 11, and talent includes Remington Ryde, Beartracks and the Gibson Brothers.

But right now, he’s mired in the fair mechanisms.

“We do a lot with the kids in the area,” Gillespie said.

“We hire a lot of the kids, and they pick up papers and they park cars.

All my kids love working for me during fair week. They think I’m the owner of the fair but I’m not. They think I am. All the kids in the area make some good money, and we help with the booster clubs.”

“That helps all these booster clubs. We used to pay parkers to come in and do it, and I said why don’t we do it for the schools and help their booster clubs. They all went for it, all the coaches in the schools. So they’ve been good with us, and it’s worked out well.”

Gillespie has played in bands all his life.

He is a rhythm guitarist and lead singer in Country Trio Plus 1.

“It used to be the Country Trio, but then when my son got old enough I put him in the band as a drummer,” he said.

“We played all over.”

This year in Daytona, he teamed up with a Floridian and a Canadian to form The Daytona Three.

“This is my last year, so they’re coming up,” Gillespie said.

“One is coming up from Florida, and the other one is coming down from Canada, and we’re going to play in the our little B & B Saloon here on the grounds on Saturday night from 9 to 12. We’re going to entertain everybody.”

He loves the agricultural elements of the fair, too.

“This is an agricultural fair. But I’m one more for the entertainment. You can’t walk around this grounds during the fair week if you don’t hear music someplace. I make sure of that.”

When he first came on board, he busted out with Brad Paisley.

“The board loved me when I did that because we had such a big turnout for that,” Gillespie said.

“I think that’s why they made me manager probably. And this last one I have this year is Morgan Wallen, and we’ve already got 1,100 tickets sold for him. But we still got more tickets, so people keep coming in and buying them.”