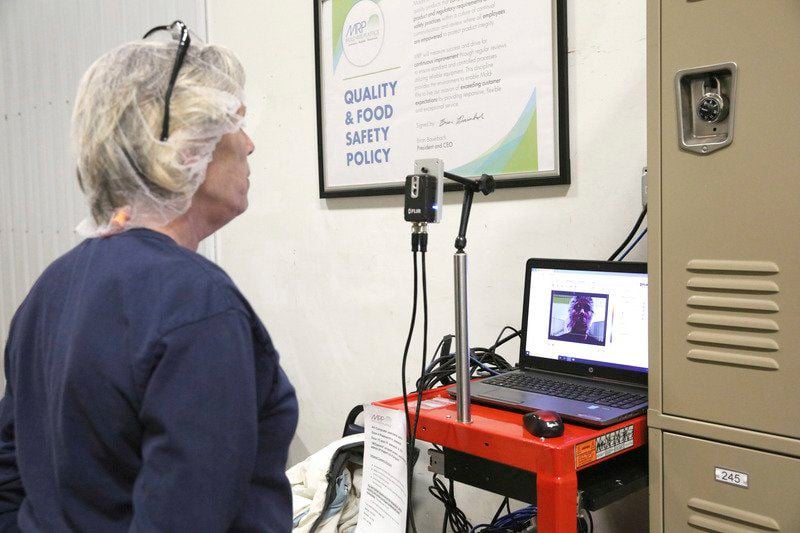 KAYLA BREEN/STAFF PHOTOA Mold-Rite employee stands still while an infrared scanner takes her temperature before clocking into work. The company has been taking increasing measures to make sure no one comes to work sick amid the COVID-19 pandemic sweeping the state. 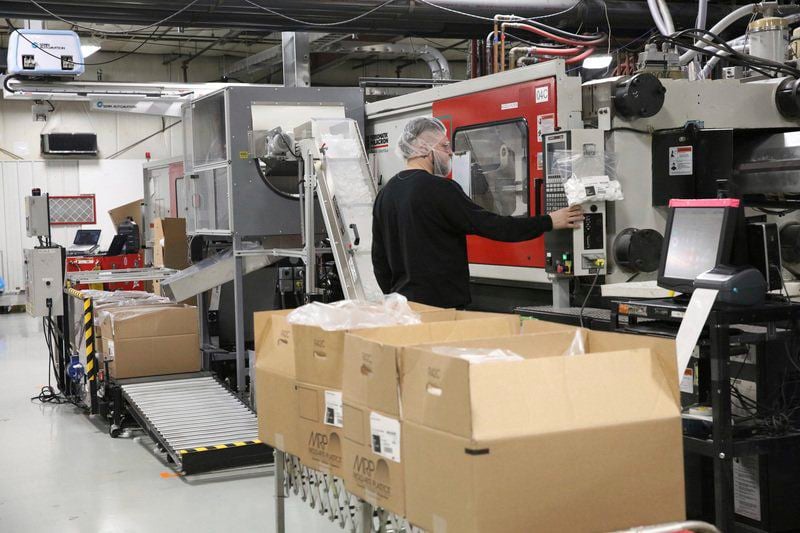 KAYLA BREEN/STAFF PHOTOMold-Rite employee Bruce Chubb tends to a machine while it continuously spits out caps to prescription bottles.

KAYLA BREEN/STAFF PHOTOA Mold-Rite employee stands still while an infrared scanner takes her temperature before clocking into work. The company has been taking increasing measures to make sure no one comes to work sick amid the COVID-19 pandemic sweeping the state.

KAYLA BREEN/STAFF PHOTOMold-Rite employee Bruce Chubb tends to a machine while it continuously spits out caps to prescription bottles.

PLATTSBURGH — Many have feared for the lives of businesses during the ongoing COVID-19 pandemic, but area manufacturer Mold-Rite Plastics says its sales have increased.

With the plant's product's being used to combat the novel coronavirus, Vice President of Operations Eric Zeisloft said, from a non-business standpoint, that was good to hear.

"We feel we owe it to the world to try and keep going," he said.

The state's non-essential businesses were told to shutdown last week, but many North Country manufacturers have since been deemed "essential," allowing them to keep on producing.

"This includes construction related materials, anything connected with health care, food products and transportation equipment, as examples," North Country Chamber of Commerce President Garry Douglas said. "Some are awaiting answers to queries that have been submitted to the state."

Mold-Rite was one of many to receive the designation, as well as fellow area manufacturer Plattco Corporation and local pharmaceutical company SterRx.

Mold-Rite Plastics, which has corporate offices in Chicago, employs some 500 workers at its plant in the City of Plattsburgh.

"Between our three manufacturing locations, with Plattsburgh being the biggest, about 70 percent of our products are being used for things that are, in some way, connected to COVID-19," Zeisloft said, adding that those products were then shipped worldwide.

"With all of the runs to grocery stores and people stocking up on things — we help there," the vice president of operations said.

SterRx President Terry Wiley said his company's products were constantly aiding the healthcare sector, even outside of a pandemic.

"We make sterile products that go directly to the hospitals, things like sodium bicarbonate, norepinephrine, epinephrine — these are all critical products for hospital use," Wiley said.

"We are definitely essential. These products are saving lives every day."

Wiley said the local facility, which operates seven days a week, was now hiring to build up its third shift.

"We were ramping that up anyway," he said, making it clear that this was not due to the virus. "That process has continued. I think the fact that we are continuing to grow and adding staff is important to the economy of the North Country.

We're in a very unique position to be having this growth right now."

Zeisloft said Mold-Rite was hiring, as well, due to a recent drop in labor.

"One thing that did hurt us a little bit was the lack of transportation," he said. "We have a dedicated bus service that runs between us and Malone twice a day; we have about 30 employees that ride that bus service.

When that got shut down, that eliminated some employees."

Plus, he added, others were needed at home for kids who were now doing distance learning.

If staffing levels were to get built up again, Mold-Rite would, in turn, be able to up its production, Zeisloft said.

Plattco Corporation was doing its part during the pandemic, as well, manufacturing valve components for dry material processing related to the dry goods and steel industries.

President Ralph A Coon, Jr. said the company had tried to "stay ahead of the curve," having 50 percent of its staff work off-site and implementing "off-shifts."

"Those reduce the populations in our production facility," Coon explained, "so that there are no teams greater than 10 working in any given environment."

Looking ahead, the president said orders looked like they were slowing, leaving some "iffiness" in the market.

"For right now, though," he added, "we're working off of our backlog and that hasn't dried up."

Due to the nature of its business, Wiley said SterRx had already been sanitizing and disinfecting its facility on the regular.

Added changes, in response to the novel coronavirus, had been the opportunity for employees who had recently traveled, to self quarantine in their homes.

Wiley said there were a number of employees doing so, including himself.

"I went on a snow mobile trip to Canada," he said. "I'll go back to work next week."

Mold-Rite had taken a variety of precautions, too, like remote work and the installation of two new sinks on-site.

On top of emphasizing cleanliness, the facility had changed its sick leave policies and had fitted infrared cameras at each of its doors to monitor employee temperatures.

"If someone is sick, it helps them identify it so they can get out of here," Zeisloft said. "Even if it is just a slight cold, it gives them the time to figure that out."

71, of Morrisonville, passed away, July 8, 2020 at her home. She was born August 7, 1948, daughter of Raymond and Belena (Mesec) LaPan. Arrangements are private and under the care of the R.W. Walker Funeral Home, Plattsburgh.