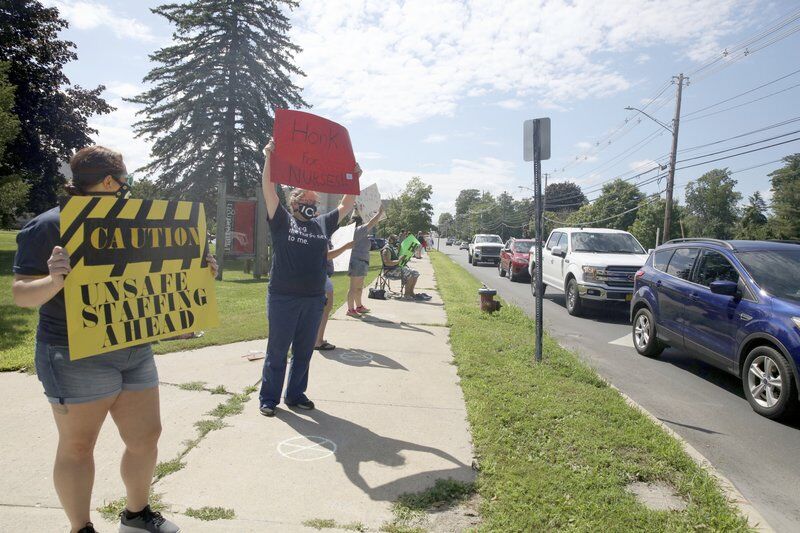 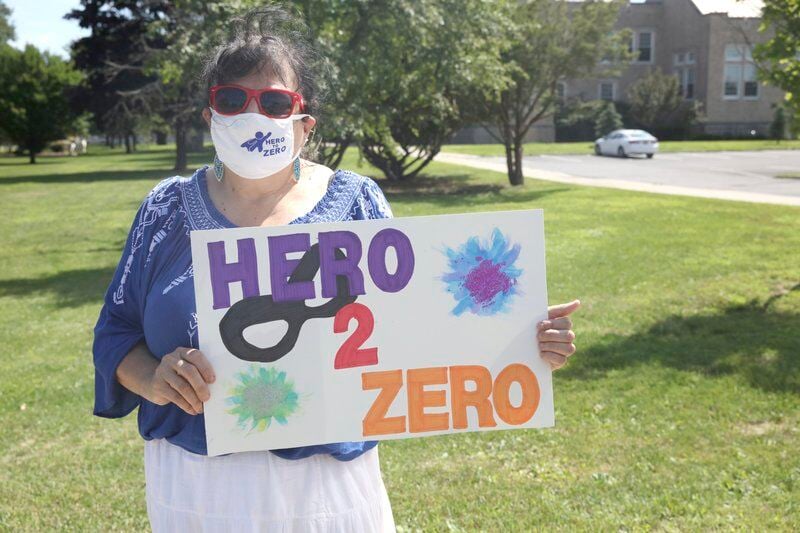 BEN ROWE/STAFF PHOTOBonnie Bijeau, a nurse in the intensive care unit at the University of Vermont Health Network, Champlain Valley Physicians Hospital, shows off her protest sign at a rally over hospital staffing concerns Friday. The sign's message reflects the fact that Bijeau feels hospital staff are not receiving the support they should, especially given the life-saving and life-risking work they are performing during the COVID-19 pandemic.

BEN ROWE/STAFF PHOTOBonnie Bijeau, a nurse in the intensive care unit at the University of Vermont Health Network, Champlain Valley Physicians Hospital, shows off her protest sign at a rally over hospital staffing concerns Friday. The sign's message reflects the fact that Bijeau feels hospital staff are not receiving the support they should, especially given the life-saving and life-risking work they are performing during the COVID-19 pandemic.

PLATTSBURGH — As someone who owns a business, Bonnie Bijeau, an intensive care unit nurse of more than 30 years, understands the business aspect of running a hospital.

"But it's always about the community first," she told The Press-Republican Friday at a rally intended to voice staffing concerns associated with University of Vermont Health Network, Champlain Valley Physicians Hospital's redesign.

By 3 p.m., about two dozen people, many nurses, lined the sidewalk on the Cornelia Street side of the SUNY Plattsburgh Hawkins Hall parking lot donning masks and holding signs that read "Hero to Zero," "Some cuts won't heal," "Caution: Unsafe staffing ahead" and "Health before wealth."

Hospital leadership have said the restructure is necessary due to financial challenges experienced before the COVID-19 pandemic as well as revenue losses caused by measures intended to help stop the spread, including the pause of elective surgeries and procedures.

The unions representing staff at the hospital — the New York State Nurses Association at CVPH and 1199 SEIU (Service Employees International Union) — have said the proposal lacked their input and expressed concern over the impact on staffing, including cuts, reductions to part-time and scheduling changes.

In a statement to The Press-Republican, CVPH President/COO Michelle LeBeau said the hospital supported everyone's right to express themselves and share their viewpoints.

"And, out of respect for all those involved in our Redesign Plan, we’ll refrain from making comment at this time."

CVPH nurse Cammie Ashley told The Press-Republican that, as a whole, the hospital had "failed to uphold their contractual obligations to bargain this restructure."

"So basically no nurse in this institution has gotten a say in what our restructure should look like."

Ashley said people were being forced to take part-time jobs, which means they have to pay for benefits, and that at one point a unit's full-time staff numbers were almost cut in half.

Ashley, who worked at the University of Vermont Medical Center for seven years and has been at CVPH for the past two, said she knows some people who are looking for other jobs or already found them out-of-state.

She has asked the Burlington hospital, where she is still on staff per diem, if she could come back if necessary, but noted that would take away from this side of the lake.

"We take care of sick patients here and we have influx from Potsdam, Massena, Ogdensburg, Saranac Lake. We service all of these hospitals.

"This is like an intermediary and to lose nurses from a central hub like that is going to be devastating at some point."

Ashley said this is the first roadblock she has encountered as a CVPH employee.

"Up until now, CVPH has been a great place to work and I just wish that going for something that’s this big and affecting so many people, ... we should have an input.

"You know, whether or not they choose to do it, they didn’t even give it a chance."

Ashley thinks the hospital is being forced to absorb a devastating financial loss due to COVID-19, but noted that the organization has received a lot of federal funding.

"I just feel like they don't want to do it (the restructure), but they could have utilized the union to help do it in a better manner, a safer manner.

"We don’t know what the implications of this are going to be."

Tearing up, Bijeau said she takes pride in her community hospital.

"I just don’t want to have sub-par care if we have cuts. Hopefully that doesn’t happen."

She hopes that something can be worked out that is manageable for everyone to have a job, do their jobs and make an honest living.

Bijeau was appreciative of the community's support.

Bijeau said she did not have a problem with how staff had to re-bid for their jobs as part of the restructure.

"I understand they’re a business and they have to make money. But, bottom line is, always the patients first.