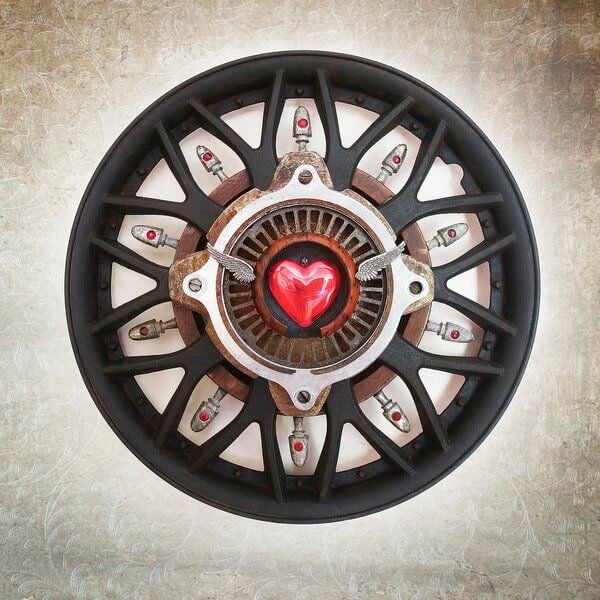 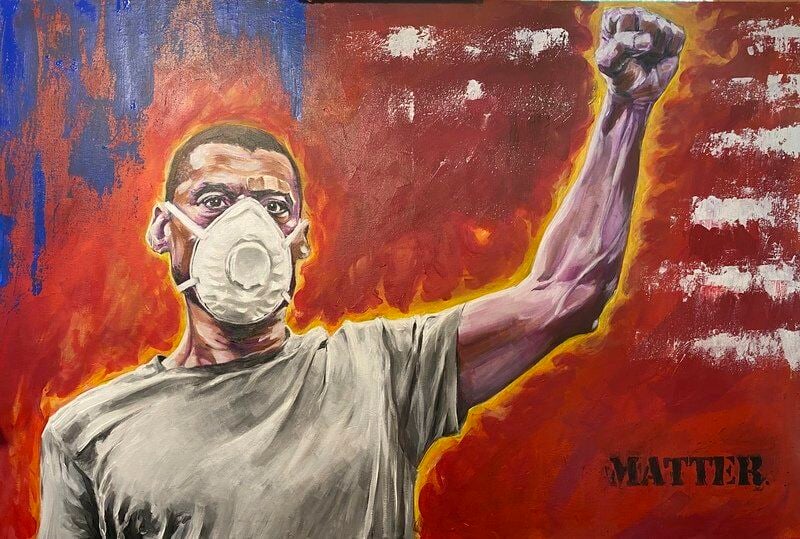 SARANAC LAKE – Corey Pandolph's “Matter" is one of eight works in gallery and nearly 40 online featured in “Responding II-2020,” a new art exhibition which opens online Friday on the Adirondack Artists Guild's website.

The cartoonist turned figurative painter grew up in Saranac Lake and lived in New York City, where he was a syndicated newspaper cartoonist.

He did a stint at the New Yorker from 2010-2017, until he relocated back to the North Country for family reasons.

That's when he started painting.

“I started with random people I found. Then everything started getting bad, and I decided I really wanted to paint something that sort of meant something.”

He sifted through black-and-white protest pictures, until he found this Getty image.

“I found this one of this guy,” Pandolph said.

“I really like the composition, the way he was standing, and the fact that he had a Band-aid on his forehead and a mask on. It was just powerful to me, so I painted that.”

Pandolph was attracted by the camera angle and shadow.

“Because I like to paint really fun clothing and veins in arms and stuff,” he said.

“I like that kind of painting. There was little blurb somewhere about him being part of a protest in Brooklyn, but I couldn't figure out who he was.”

Pandolph painted the work after George Floyd was killed on May 25.

He concentrates on people and humanity.

“I was one of the original founders of the Artists Guild,” Pandolph said.

“I've been submitting some paintings to them when they had shows but I felt this was one of the best. I was just excited they could show my painting because I've only been painting about a year. They mostly know me as a cartoonist.”

The show comes 19 years after the guild members responded to the 9/11 attacks.

“We were talking about doing something because of the dreadful year 2020,” Eleanor Sweeney, a guild member, said.

“There are so many issues that people are having trouble with. Mark Kurtz actually remembered that in 2001 we had done this show, 'Responding,' which was about the attacks, and we thought we would do something similar, so we called it 'Responding II-2020.'”

The guild advertised for submissions and received artistic and written works in a collaboration with the Adirondack Center for Writing.

“Having access to new art, written and visual, that responds to this sliver of an immensely important time in history is a real opportunity to connect from afar,” Baylee Annis, assistant to the director of the Adirondack Center for Writing, writes.

“Nothing has been easy throughout the past six months, but from struggle comes works of art. As we face the impending chill of winter, let's take a moment in warmer days to reflect on who we are, what we care about, and how we will forge on. We invite you to post comments, share with friends, ask questions and listen for the future--together.”

“There are about 36 altogether,” Sweeney said.

Submissions were inspired by coronavirus, racial injustice, and the threats posed by climate change, etc.

Many of the works are abstract such as Anastasia Osolin's “Compassion Means Suffering Together.”

“It's a mixed-media or found-object assemblage,” she said.

“It's made out of a hubcap, various scrap metal and wood. The center is a valentine heart with some wings coming off of it.

“The piece itself is really abstract but inspired by the idea that as a society we are currently faced with a number of major crises or problems that all require us to kind of work together and have compassion and empathy for one another and cooperate to solve these problems.”

There will be no opening reception.

Gallery hours in September are 11 a.m.-3 p.m. Thursday through Sunday or by appointment.

Capacity limited to six visitors at a time and masks must be worn.

, 69, of the Moffitt Rd., died Tuesday September 15, 2020 at CVPH Medical Center. A Mass of Christian Burial will be celebrated Monday, September 21st at 10:00 am at St. Peter's Church in Plattsburgh. Burial will follow in Sacred Heart Cemetery in Chazy. Due to Covid-19 face covering and soc…

, 86, of Plattsburgh, passed away Thursday, September 17, 2020 at the Meadowbrook Healthcare Facility. He was born May 12, 1934. Arrangements are incomplete and entrusted to Brown Funeral Home, 29 Broad Street, Plattsburgh, NY 12901.