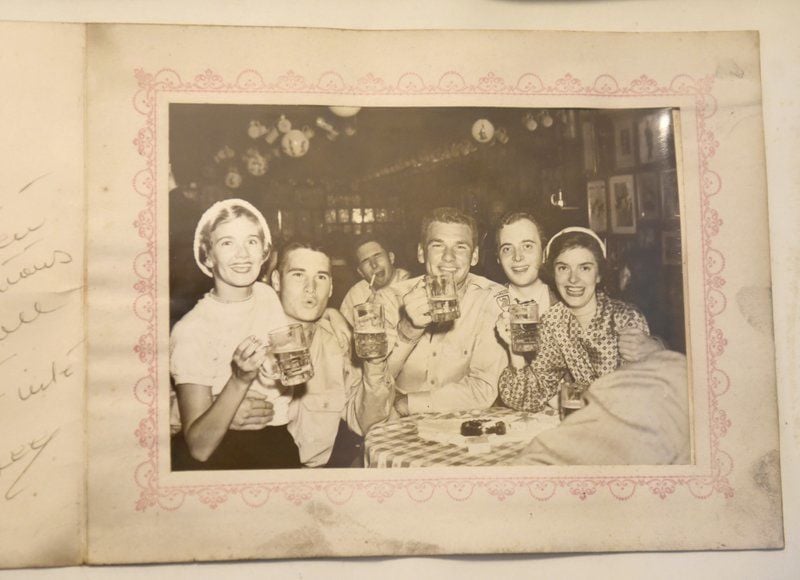 IMAGE PROVIDEDLeslie Schofield (left) sits on the lap of “Ken” Kendall, who walked into American Rathskeller with his wingman, Ron Hobson, who sits beside Harold Lawson, chaperone for his sister, Ann Lawson (far right.) An unidentified man is ‘photobombing’ the group. 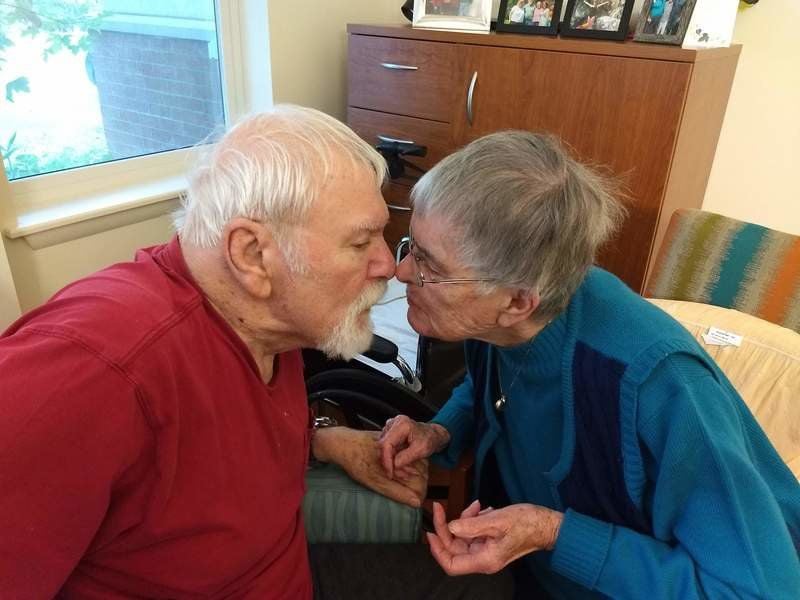 IMAGE PROVIDEDLeslie Schofield (left) sits on the lap of “Ken” Kendall, who walked into American Rathskeller with his wingman, Ron Hobson, who sits beside Harold Lawson, chaperone for his sister, Ann Lawson (far right.) An unidentified man is ‘photobombing’ the group.

PLATTSBURGH — Ron Hobson and Lyle “Ken” Kendall went to the German-American Rathskeller because they had heard it was a fun place for young people, and it wasn't expensive.

His wife, Ann's childhood bestie, Leslie Schofield,  came up and asked if they wanted to sit with them.

The young servicemen were drinking beer.

“All we could afford,” he said.

SHOT IN THE DARK

Ann's brother and chaperone, Harold Lawson Jr., sat between his future brother-in-law and his sister.

Harold and Ron shared a love of classical music and that's what they talked about while Ann's heart fluttered at first sight of the leading-man handsome blond.

“That's about all I can remember,” Ron said.

Schofield left her expensive birthday watch for collateral for the bar tab they couldn't pay at the time, even though the BFFs, Ann's brother and the servicemen split pitchers of beer.

“It was nothing unusual,” Ron said.

“We went back the next week. We were in civvies then. We didn't have our uniforms on. They missed us. They were sitting upstairs, I remember. We were sitting downstairs, and we saw them come downstairs,” Ron said.

This was their first official date sans Harold after the first shot in the dark.

“We just sat at the table again and drank beer again.”

The couples went to Greenwich Village to dance.

“I don't remember that,” Ron said.

“She remembers a lot of stuff that I don't remember.”

He asked her out for another date, but Ann's father, Harold Lawson Sr. wanted to take Ron's measure, so he went to Kew Gardens, Queens to meet Ann's family.

“I had to go in and get inspected,” he said.

“I liked him. He was a nice guy and everything. He was in the Black Watch in Canada. He was still looking me up and down.”

“I stopped playing football at the school to go see her,” he said.

“I was a tackle, I think. I kept going down to Flushing until I went to West Point.”

The path that led Ron to that fateful night in German-American Rathskeller was following in his father's military footsteps.

He had joined the U.S. Army after graduating from Richmond Academy in Portland, Oregon.

“I was stationed up at Stewart Air Force Base,” he said.

“They had a school up there for servicemen going into West Point.”

When he got to the United States Military Academy, they were separated for two months.

He couldn't even talk on the telephone let alone see her.

Though he couldn't leave the post, he had some free time on Labor Day and Ann rode a couple of hours on the Greyhound bus to see him.

This became their new normal.

“I was involved in school,” he said.

As a Plebe, the only place he could sit with his sweetheart was Grand Hall, which had a big fireplace.

It was a mile from the hotel where young women like Ann could stay.

The sweethearts had a half hour max to visit in Grand Hall before a snowy walk back to her hotel and then back down again if they wanted to resume their visit.

One day an upperclassman called Ron on a 31:20 visit.

Ann challenged the upperclassman by saying, “You're training him to be an officer and a gentleman, and he's dragging me back and forth in the snow.”

The upperclassman gave them permission to stay.

“The Plebes didn't have any privileges,” Ron said.

He parted ways with Uncle Sam when he decided to become a husband and family man.

They lived with Ann's parents a couple of years while he worked days and went to night school at Columbia University.

They secured an apartment on campus.

“It worked for Columbia,” he said.

“I was keeping tracking of the maintenance requirements that the other people used. The school was pretty good because I was able to juggle courses a bit.”

He majored in industrial engineering.

Afterward, he went to Farleigh Dickinson and got a master's degree in business.

Then, he started taking teaching courses at Montclair State University.

He went to work for General Foods, while Ann worked at Borden, which was a subsidiary.

They and their two girls, Brook and Chris, went out to Wisconsin for a year.

Ann's mother, Constance, had room to live with them after Harold Sr. had passed on.

She watched the girls, so Ron and Ann were free to go on a 10-day-canoe trip, just the two of them.

“We canoed over the whole area. That's part of all the pictures we lost in the fire.”

Next, he ran a warehouse for Lowenstein until they closed it. The option on the table was to relocate to the American South.

BACK TO THE LAND

They escaped from New York City and went back to the land.

Constance came with them.

“Then, we pulled her up to Mooers and put her in a cabin,” Ron said.

“She didn't mind. She had a nice room and everything.”

They purchased their parcel because the price point was right.

“It was reasonable and what we were looking for,” Ron said.

“So we moved up there, and I built a house. That's how we wound up in Mooers for 40 years.”

He built a solar-powered house by reading books.

Ron wanted to be as self-sufficient as possible.

Fortunately, he landed a job in marketing at SUNY Plattburgh.

"This other fellow got the job then quit the job. I got the job that he was going to take. I stayed there for 20 years teaching business courses because they started their business program then. They were casting about for anybody, and I happened to be there.”

He got the opportunity to teach in Hungary and Russia.

In Ufa, they met ordinary Russians.

“They were no high officers or anything like that,” Ron said.

“The one thing we learned is that they want the same things that we do. No difference or anything for their children and what not. That really impressed me.”

He experienced the same sentiments in Latvia.

The Eastern Europeans were stunned to see his magazines depicting white and black supervisors working together.

“They wondered about that,” Ron said.

“I said we still have problems but a lot of these fellows are working in jobs and are making their way up in society. They were absolutely astounded. I'll never forget that.”

His ancestors, two Hobson boys left England, one traveled by wagon train to the American West and one stayed on the East Coast.

Ron came East to find the love of his life.

Their immediate wedding feast was sardine sandwiches, but he did take his bride out for a Chinese dinner that evening.

His philosophy on marriage is that it is a relationship.

“I was always home except for a couple of instances,” Ron said.

“I wasn't somebody there and gone. The only time I was gone was when I was in Hungary.”

His father, Brig. Gen. Howard Malcolm Hobson, was gone a lot during his distinguished career.

“During the war, he was gone all the time,” Ron said.

He was in eight schools in 12 years.

“The only time I settled down was when I was going to college and we got married,” Ron said.

Ann says she got him young and trained him right.

With his father's deployments, Ron was the little man of the house and responsible beyond his years.

“But one thing that helped, my mother said I was born 10 years old,” Ron said.

This is Part 2 of “American Rathskeller” which chronicles the 65-year love story of Ron and Ann Hobson of Plattsburgh.

Read Part One on the Press-Republican website at tinyurl.com/y5otxs96