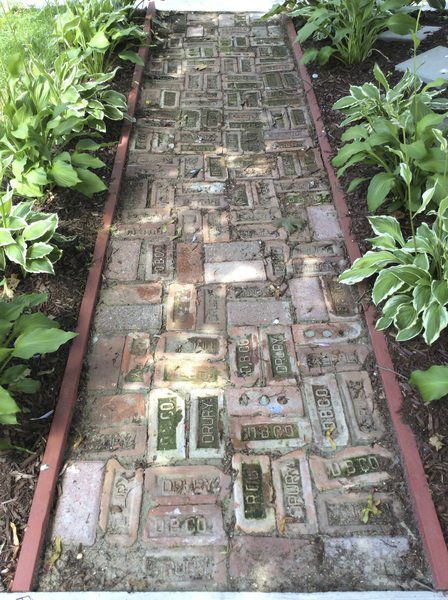 Judy Gibbons chipped old cement off these bricks she reclaimed from a pile at the former Plattsburgh Air Force Base. Her husband, Tim, replaced them a second time after last year’s construction on the roadway outside their Lorraine Street residence. 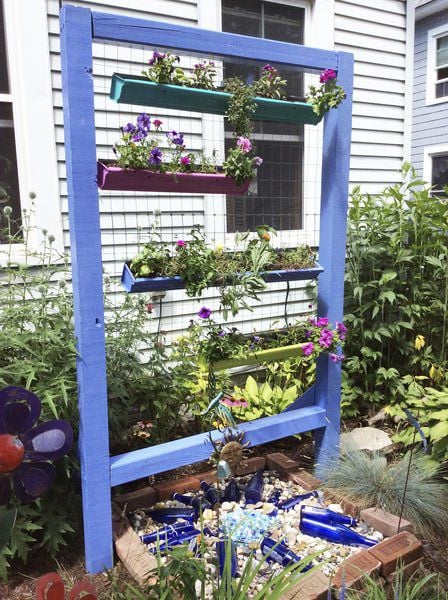 ROBIN CAUDELL/Staff photoTim Gibbons made this privacy screen using existing posts to add a vertical element to the city garden.

Judy Gibbons chipped old cement off these bricks she reclaimed from a pile at the former Plattsburgh Air Force Base. Her husband, Tim, replaced them a second time after last year’s construction on the roadway outside their Lorraine Street residence.

ROBIN CAUDELL/Staff photoTim Gibbons made this privacy screen using existing posts to add a vertical element to the city garden.

PLATTSBURGH — Winter 2017-18 was an atypical one for Tim and Judy Gibbons of Plattsburgh.

She didn’t come up with a garden theme and paint artifacts to reflect it.

“The only addition that we added this year was a lady gardener that we painted and old chiminea to create,” Judy said.

“She’s holding a basket of flowers. We re-purposed it because we were getting another one this year. I took the old cast iron one and turned into a garden lady. My granddaughter created her hair out of an old mop and tie dyed it, so it’s kind of funky looking.”

Judy’s traditional artwork was a no-go because she had both her knees replaced in late February.

“I just didn’t have the energy to do it,” she said.

“What I have done this year is rediscovered and reclaimed things that had been there and been hidden over the years. I spent a lot of time finding treasures that we’ve had in the past but just become lost in the growth of the garden.”

The garden has been therapeutic in her recovery part because it gets her out and gets her moving.

“We have a huge lavender garden now, well huge for our city,” she said.

“The fragrance alone is a de-stressor. It’s been a year of recovery and rediscovery.”

“Tim said that would be a really great thing to do out there. So, he took the poles that we had originally there for other things and re-purposed them and put this metal screen on the back.”

They purchased metal rain gutters, put caps on the end and painted them in vibrant hues.

“And planted them with flowers and herbs,” she said.

“Luck Brothers was absolutely wonderful because we had all those plants on the city property,” Judy said.

“They gingerly dug them up, put them in buckets and watered them for me. Then, when they started to put down sod afterward, we had these pavers (old Plattsburgh Air Force Base bricks). They very kindly put sand down there for us, and then Tim put the pavers in that we had used before. It came together for a nice little addition for a walkway there.”

The neighborhood children like to step on blocks-of-color popping inside the Gibbons’ garden.

“Parents come by with their kids, and they take pictures and stuff,” Judy said.

“I tend to repaint it every year, so it looks fresh and bright. The grass coming in between the pavers is really coming in good at this point. That’s the only lawn we have to mow that little bit of grass between the pavers. I have my little clippers that I go out with.”