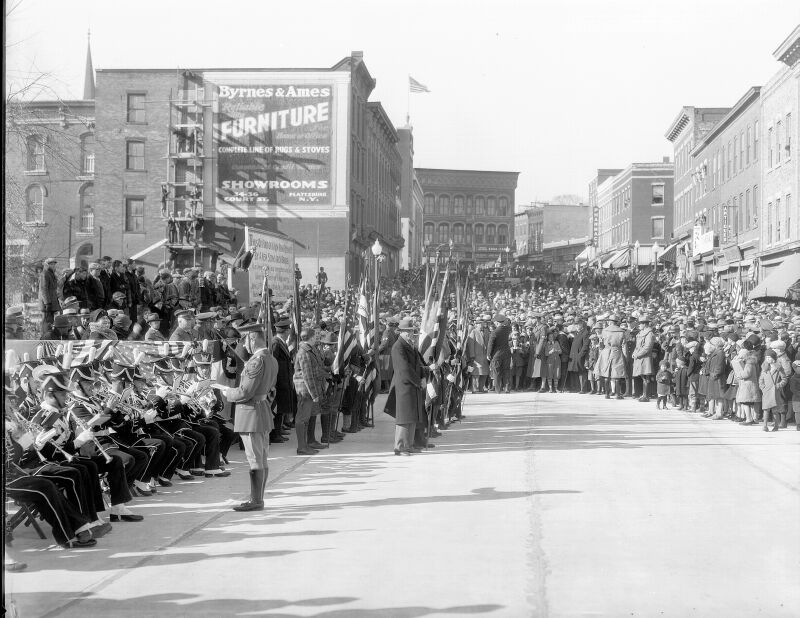 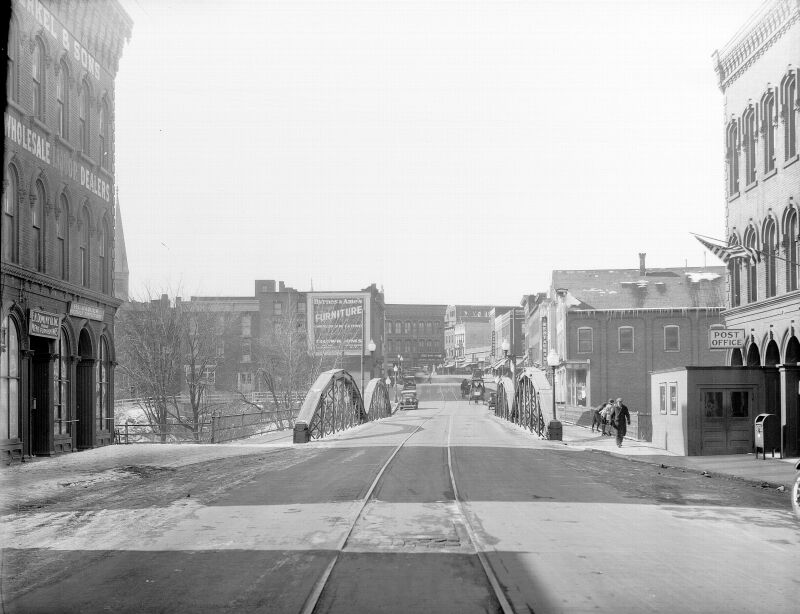 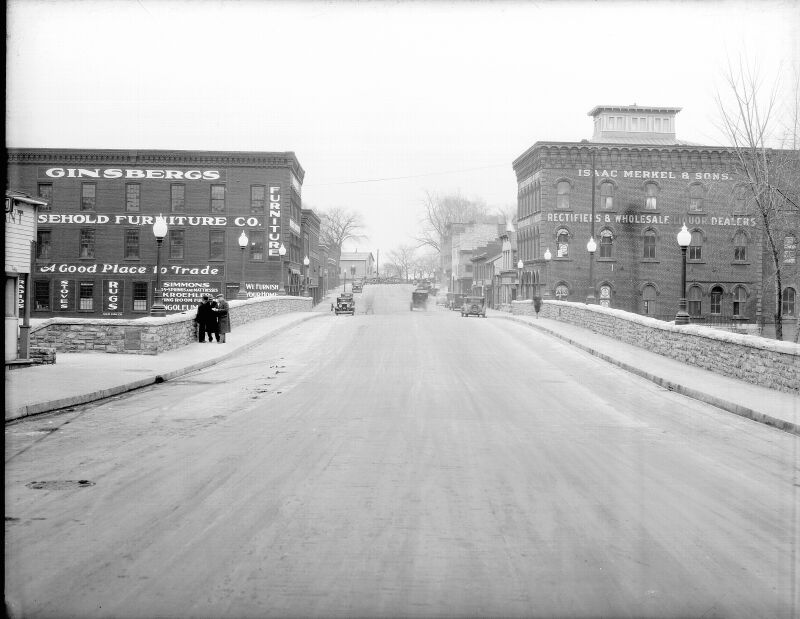 A view of the New Stone Arch Bridge, looking east on Bridge Street in downtown Plattsburgh, probably circa 1930.

A view of the New Stone Arch Bridge, looking east on Bridge Street in downtown Plattsburgh, probably circa 1930.

PLATTSBURGH — Daily, motorists and pedestrians cross over the Plattsburgh Stone Arch Bridge without any thought of how it got there as they cross the east and west banks of the Saranac River at Bridge Street.

When it opened on Nov. 11, 1930, it was a big deal that drew thousands of local residents and dignitaries.

Clinton County Historical Association volunteer, Roger Black, will give a talk about the bridge, and downtown area on Thursday, June 17 at 6:30 p.m. at the MHAB Life Skills Campus, 14 Dormitory Dr., Plattsburgh.

Black has a special interest in the new CCHA website and the thousands of glass plate and celluloid negatives in the Clinton County Museum’s archives.

The Stone Arch Bridge, built from Cadyville sandstone, is as an iconic structure in Plattsburgh as City Hall and the McDonough Monument.

It spans the Saranac River near Durkee Street in the downtown area.

“There was a dedication of the bridge when they opened it up to the public that was Nov. 11, 1930,” Black said.

“That’s one of a number of photos that we have of that bridge and the bridge they replaced.

“I’m not saying the dedication has a whole lot of historical significance, although a lot of people came there. It was an impressive event.”

“Before that, there were other things there. I just find that really a lot of fun to compare that to what it was earlier, what it was later, and what it is now.

“That’s really what the talk is about just pointing out all these different things. I love looking at old photos, and I think a lot of people do.”

J.J. Fitzpatrick & Sons, the builders of the bridge, have been located on Bridge Street in one location or another during their entire business’ career which dates more than 50 years, according to the Nov. 12, 1930, page 4, edition of the Plattsburgh Daily Press.

“I’m sure today that would be many millions. That amount of money was approved by voters in February. It amazes me that from the time that they approved the funding and the bridge was done was less than 11 months.

“It was a simpler construction. The thing that everybody was talking about was it was a much better looking bridge. It just made the whole city look a lot better and made Bridge Street look a lot better.”

Plattsburgh has had at least three bridges before the one now being dedicated was built, according to the Plattsburgh Daily Press, Nov. 10, 1930 edition.

“One of the those wooden structures was in existence in 1814 during the Battle of Plattsburgh and was destroyed by our own people to hamper the enemy on its march to the South. The planking was torn off and our boys stood on the East side and picked the British off as they tried to cross on the stringers.

“Before what we know as the ‘Old Bridge’ was built, there was a heavy wooden structure which many of our older residents will remember.

“In 1885, the last wooden bridge was replaced by an iron one. This was constructed by the Berlin Iron Bridge Co. of East Berlin, Conn. Wm. W. Mead was commissioner at the time. The iron bridge gave way to the present beautiful bridge which is to be dedicated tomorrow.”

“The bridge that they had there before then was an iron strut bridge,” Black said.

“It was narrower. It was described as ‘inelegant.’ It kind of looked like an ugly, little bridge. The stone bridge just looks a lot nicer.”

Black noted how the Saranac River enters the area.

“The Saranac at the time when they built the bridge, there was a damn just south of the bridge,” he said.

“That gave the whole river a different look. In the area where the parking lot is right now, that was at one time more of an industrial area. Even by 1930, that was totally rundown. It was pretty much an abandoned area.

“There was a bowling alley there and a couple of other buildings, but it wasn’t industrial that much anymore.”

Black’s PowerPoint presentation includes photographs of Bridge Street thronged with between 5,000 and 6,000 people, according to newspaper reports.

“That was before the bridge was opened and the crowd was able to go through,” he said.

“I did this talk many years ago. It wasn’t just like this because I found a lot more photos. As I was talking about it, a woman at the end of it said, she wanted to mention there is a plaque in the middle of the bridge and you can see it today. As a child, she was at that dedication ceremony. She was the girl who revealed the plaque. That just blew me away. I thought I knew everything, and she was actually there.”

Dr. James Riggs of Oswego was the principal speaker at the dedication exercises.

The date of the bridge opening coincided with Armistice Day.

The Plattsburgh Daily Press reported Kehoe stated: “The day itself is an important one, not only in the history of Plattsburgh but in the history of the whole world, for it marks the cessation of a terrible struggle between the champions of democracy and the supporters of autocracy; it marks the day when democracy became supreme throughout the world; it likewise records the time when autocracy was hurled forevermore into the abyss of oblivion.”

“When you think about it, it’s kind of amazing spending all that money just before the Depression,” Black said.

“The Depression was 1929 in November. The money that was approved by the voters was in February. I don’t think the impact of the Depression had really hit things as much thn.

“When you think about it, it was very close.”

WHAT: Clinton County Historical Association volunteer, Roger Black, will give a talk about the Plattsburgh Stone Arch Bridge and the downtown area.

ADMISSION: The event is free and open to the public. State and local COVID restrictions will be in force.

ZOOM: There will also be a Zoom connection to the presentation which can be accessed by emailing the CCHA Director.

A Mass of Christian burial will be celebrated on Friday, August 6th, at 10 a.m. at Holy Name Church, Au Sable Forks. Services were entrusted to Zaumetzer Funeral Home.