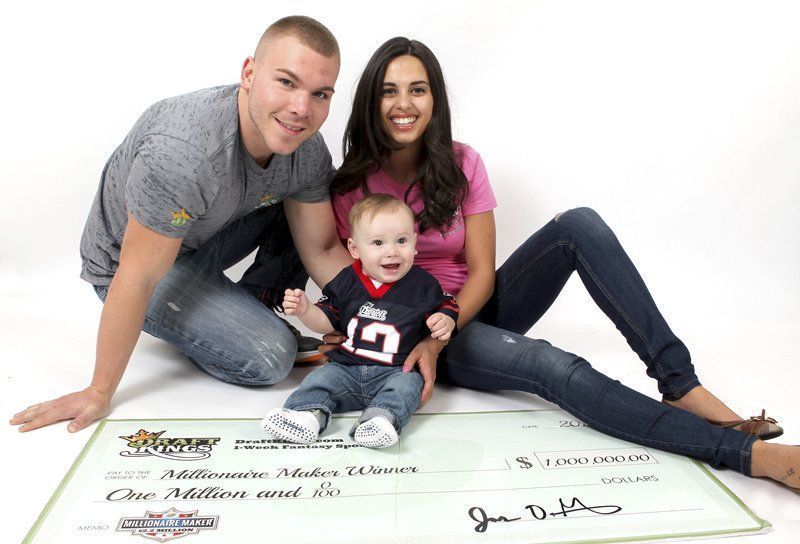 Michael Leavitt, 25, and his fianceé Bruna Ferreira, 24, pose for a photo with their 7-month old son Michael Jr., on a replica check in North Andover. Leavitt won $1 million in a Draft Kings fantasy football contest. 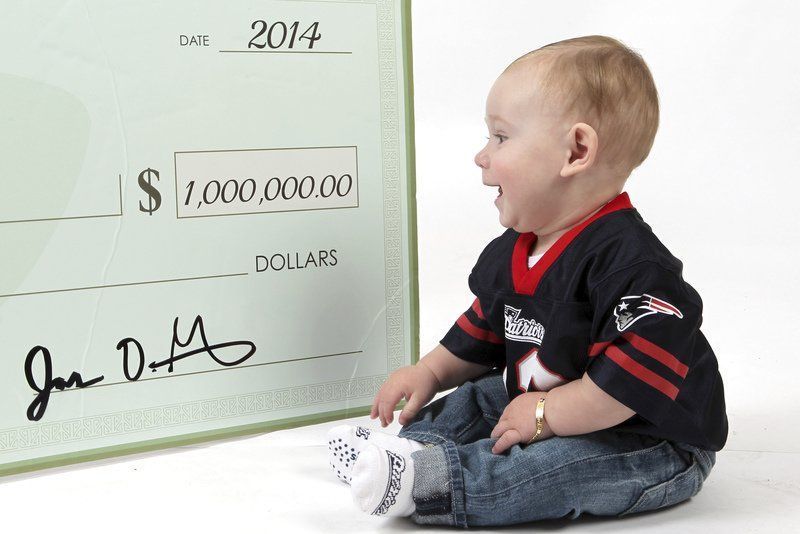 Michael Leavitt, 25, and his fianceé Bruna Ferreira, 24, pose for a photo with their 7-month old son Michael Jr., on a replica check in North Andover. Leavitt won $1 million in a Draft Kings fantasy football contest.

Mike Leavitt knew going into the Monday Night Football game between the Dallas Cowboys and Washington Redskins that a poor outing from Cowboys superstar wide receiver Dez Bryant would mean a $1 million payday for him.

Bryant indeed had a subpar game, catching only three passes for 30 yards and scoring only one touchdown.

Leavitt won the "Draft Kings Millionaire Maker," a weekly contest in which entrants assemble a lineup of NFL players whose statistical game performances are converted into points. A $27 entry fee is needed for a chance at the top prize.

"I'm speechless," said Leavitt, 25, a former football star who currently runs his family's auto dealership, Leavitt Auto & Truck, in Atkinson. "I just checked and saw they added the winnings to my account. It actually was a little more than a million. It was $1,008,001. I can't believe it."

Leavitt entered Monday night's game in first place and was invited by "Draft Kings" to bring about 10 family members and friends to Scholars, an American bistro and cocktail lounge. When word circulated about his good fortune, more than 50 people showed up to support him and watch the Cowboys-Redskins game.

The entire night, alcohol and food for the Leavitt clan, was on "Draft Kings." That bill ended up being just over $10,000.

In fantasy football-speak, the guy in second place needed Bryant to get 25 points, which meant about two touchdowns and 60 yards. He got half that amount and ended up getting just falling 12.2 points short of Leavitt.

Each fantasy team has one quarterback, two running backs, three wide receivers, a tight end, a flex player (an additional RB or WR), and a team defense.

"I figured the Bears defense was really struggling," explained Leavitt. "Brady has been hot and Gronk has been finally getting healthy, so I expected big games out them. As for LaFell, I just liked the way he'd been playing lately, like he was ready to have a breakout game at some point, so I took a chance with him."

One of the key late changes he made was taking Cowboys wide receiver Terrence Williams out of his lineup and replacing him with New Orleans Saints wideout Brandin Cooks, who had six catches for 94 yards and a touchdown. It gave him the 25-point cushion heading into Monday night.

Leavitt woke up at about 11 a.m. on Tuesday he and his fiancee, Bruna Ferreira, who have an eight-month-old son, Mike Jr., started realizing what happened.

Ferreira said they don't have any big needs.

"I need the lights fixed on the back of my car," Ferreira said. "And we need a lamp for my son's room. Other than that we don't really need much. We have our health. We have a nice condo. We really are blessed."

Information for this story was reported by the North Andover (Mass.) Eagle-Tribune.